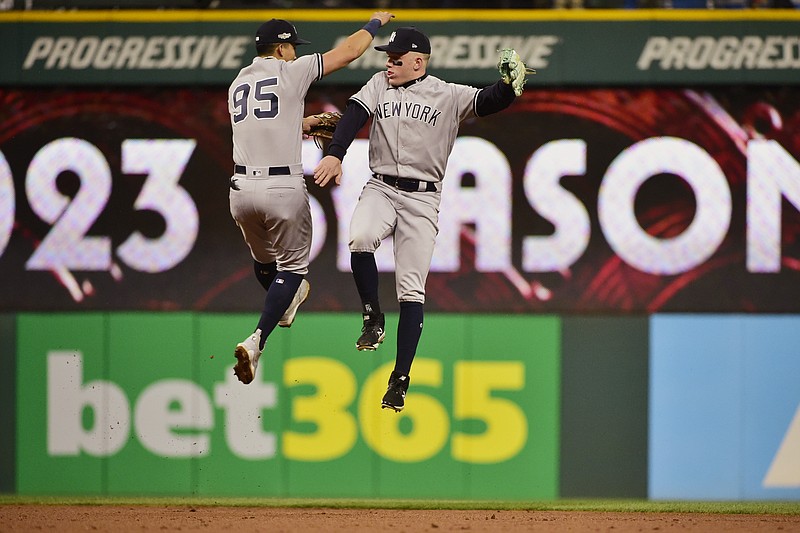 Someone who really cares about New York and her sports teams -- Woody Allen, David Letterman and Rudy Giuliani come to mind; Donald Trump, if time permits -- should do something about the Yankees.

Which former U.S. president needs to speak from beyond the grave to repair this once-mighty vessel: George Washington to take his name off the bridge spanning the Hudson River or Ulysses S. Grant to house his remains elsewhere but that famous tomb in Manhattan?

Where's the latter-day Ned Beatty who spells it out to Peter Finch in "Network." In short, addressing manager Aaron Boone or club executive Hal Steinbrenner: "You have meddled with the primal forces of nature and you must atone."

Steinbrenner signs the checks for the Yankees, as did his late father, George. He is virtually a hands-off boss unlike The Boss. So far, he hasn't fired Billy Martin once (which George did five times).

The New York media, looking upon the Yankees as a sacred trust, might call Hal to action regarding Boone, who once hit a famous home run off the Boston Red Sox (so did Bucky Dent) but since has done little ever to have a monument at Yankee Stadium in his honor.

They keep score in New York -- well, everywhere -- by championships won. And the Yankees, 27-time world champions, are coming up short lately. A 13th consecutive season without a World Series title in the Bronx ended early Monday morning with a 6-5 loss to the Houston Astros in the American League Championship Series. As against the Los Angeles Dodgers (1963) and the Cincinnati Reds (1976), New York lost four straight, this time to a former National League team that has replaced the Red Sox as public enemy number one in Gotham.

With reminders of the Astros' 2017 ALCS title in a season that Houston won the World Series but later came under fire for stealing signs, the hometown Daily News had the last word on New York's latest demise. "No Cheating Necessary," a headline screamed across the back (lead) sports page of Monday's edition.

This sweep is especially troubling for the Yankees, who also lost four straight to the Red Sox in 2004 (after leading the ALCS 3-0). The '63 Dodgers saw Sandy Koufax at near peak form and the '76 Reds as among the greatest NL teams of the last century. The Yankees won another pennant in the 1960s but not another world championship until 1977, when George Steinbrenner signed Reggie Jackson in free agency while constructing what became known in the press as the Bronx Zoo.

The Houston sweep underscored like nothing else that the Yankees no longer reign supreme in the American League. Maybe still in New York, where the Mets had an even quicker October exit after a fall swoon. The Yankees, even with Aaron Judge hitting an American League-record 62 home runs, no longer have a certain swagger. They lack the attention to detail -- moving runners over, creating long counts -- that distinguished teams managed by Joe Torre and with Derek Jeter at shortstop.

Not to knock Judge, who deserves year-end honors (possibly a record contract) in a season that he early declined big money from the club. But the closing scene in possibly his last bat as a Yankee, Judge tapping out to reliever Ryan Pressly, was strictly an Off-Broadway production.

Houston is thus poised to win its second World Series off its fifth pennant in 60 years. The Astros say they're doing it for manager Dusty Baker, seeking his first world title after missing with Barry Bonds in San Francisco and later on the North Side of Chicago and with Houston (2019 against Washington). It was gratifying to hear young slugger Alex Bregman say after Game 4 that he enjoys playing a childhood game for money.

Houston has risen to this height in baseball with key in-house moves and after some missteps by the Yankees. The balance of power in the AL shifted with Houston's late-season addition of pitcher Justin Verlander in 2017. A Yankee team with such professional hitters as Jeter and Paul O'Neill would have collared Verlander in Game 1 last week when the veteran righty ran up a high pitch count early. Verlander has given the Astros more for their dollar than Gerrit Cole has for the Yankees.

These Yankees kept swinging for the fences with an egregious sum of 17 strikeouts to Houston's two in the opener and 50 in four games. The Yankees seem to have forgotten that the game is played differently in October, when the pitching is better and a team's errors in the field and on the bases are magnified. Playing station-to-station baseball, waiting for the home run, can be a most boring sight.

The Yankees lack someone with the fire of catcher Thurman Munson, who preceded Jeter as team captain, or Houston's Jose Altuve, who after a terrible postseason batting slump snapped to life in the Bronx. Mr. October (Jackson) wore pinstripes but Houston has become October's team.

On to a World Series with the Astros and Phillies, Philadelphia riding the hot bats of Bryce Harper and Rhys Hoskins to postseason triumphs against St. Louis, Atlanta and San Diego. The Yankees once had a chance for Harper, a World Series winner in Washington, as they did with David Ortiz, whom George Steinbrenner said his "baseball people said we didn't need" in 2004, only to see Big Papi become the October hero in Boston that Ted Williams was not.

Further chafing Yankee fans, no doubt, is that Harper wears Babe Ruth's number: 3. It's enough to make a latter-day Howard Beale rise up and say he's mad enough to spit (or something) and isn't going to take it anymore.