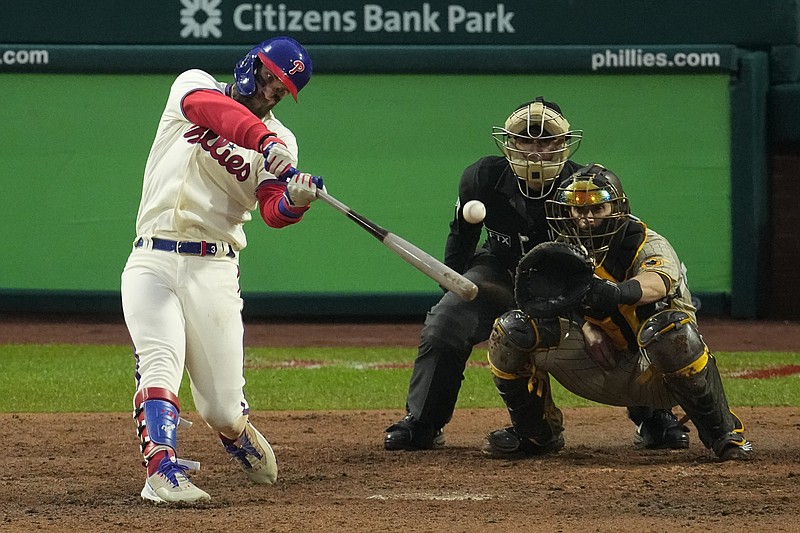 Just in time for the World Series, ownership of Little Rock station KLRT has pulled its programming from the Fox affiliate over a contract dispute, baseball's Fall Classic begins Friday with some player likely to be termed afterward as Mr. November of an oh-so-long season.

It could be worse, I guess. Houston and Philadelphia aren't likely to draw Super Bowl-like ratings. Think about it: The Cardinals or Cubs could be playing, fans of the Chicago National League club in particular deprived from something that happens as often as comedian Jon Stewart praising Donald Trump.

Sorry if you were expecting other teams in the Series. The Yankees, like the Arkansas outdoors, now change colors in the fall, once gracing TV sets as often as Perry Mason and the Cartwright family. Sandy Koufax, whose name often shows up in this column in October, no longer pitches for the Los Angeles Dodgers, arthritic elbow and all. Some of you may be wondering if the sport requires so much face time for Alex Rodriguez, who does not carry Ken Griffey Jr.-like popularity.

Tony Kornheiser, keeper of the sports flame with Michael Wilbon on ESPN's daily "PTI" program, shot a zinger across the bow on Monday, knocking baseball for delaying Game 1 of the Series until Friday. An early-week start would have kept the sport from direct programming conflict with football, which network executives should consider a prime goal.

This is, after all, an era that backup quarterbacks in the National Football League have higher visibility than some ace pitchers. The NFL is strong enough to withstand current bummer seasons from golden-boy starters Tom Brady and Aaron Rodgers and an early-season injury to Dak Prescott. Brady's Tampa Bay Buccaneers make their slotted Thursday-night appearance this week against Baltimore, with Brady and opposing QB Lamar Jackson both struggling. (I'll be watching NBC's "Law & Order," thank you.)

More cheering news is that the Arkansas-Auburn football game is still on for 11 a.m. Saturday on the Southeastern Conference Network. And that the Razorbacks' Nov. 5 game with Liberty -- don't mark that down as an automatic victory -- has a 3 p.m. window on the same channel. The latter game conflicts with the Breeders' Cup World Championships on NBC but that's why DVDs are sold; besides, Flightline looks like the goods at a short price in the $6 million Classic.

Back to the World Series, which once ended a season that baseball carried only a Game of the Week, the All-Star Game and the Fall Classic. The first postseason playoffs came in 1969, followed two years later by the first World Series game at night (Baltimore at Pittsburgh, Game 4, 1971, the last Series for Roberto Clemente).

Back when one could do such things, school kids like myself smuggled radios to school for recess updates -- yes, of daytime baseball. It mattered not who was playing or describing the action. Postseason baseball can be appreciated if the announcer be Jack Buck or son Joe, the latter less of an icon than his dad, who advised Cardinal fans to "go crazy, folks, go crazy" after an Ozzie Smith home run against the Dodgers in the 1985 National League Championship Series. Baseball was strong enough to survive Howard Cosell, who was not a fan of the summer game.

These playoffs have been surprising, to say the least, with favored teams such as the Yankees, Dodgers, defending champion Braves and Cardinals tagged out. Philadelphia, which trailed St. Louis 2-0 before a six-run ninth inning that sparked a two-game sweep of the new wild-card series, has since snuffed out seasons of the Braves and Padres.

Houston has produced clutch performances time and again, entering its fourth Series in six years with a perfect record this October. The Yankees, even with AL home-run champion Aaron Judge, came across like a first-year TV series that gets canceled early because of lousy ratings.

Now, we get Houston and Philadelphia with stars abounding and everything riding. Sure would be a nice World Series to watch.