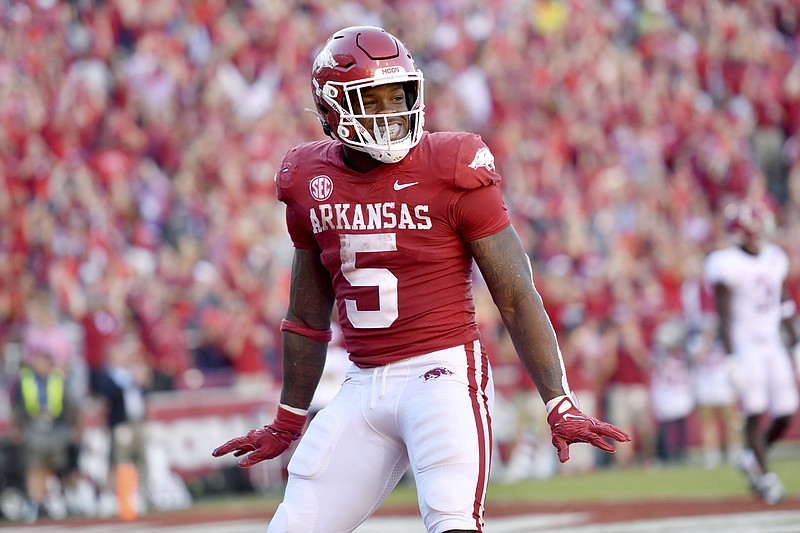 Arkansas running back Raheim Sanders (5) celebrates after a touchdown against Alabama Oct. 1 in Fayetteville. - Photo by Michael Woods of The Associated Press

An Auburn man who lived in Arkansas, David Watkins could have been difficult during football season. He was anything but that, his friends could tell you.

City manager of Hot Springs when he passed in August 2015, Watkins adjusted to life in Razorback Nation quite well, thanks. Gone much too soon at age 61, he projected warmth like I found among Auburn people on a 2014 football visit. They have more tangible success in the sport than Arkansas fans, some of the latter living in a fantasy that it's still 1964 and beating Texas is the be-all and end-all of daily living. Pure fiction, that, although beating Alabama comes close.

As an Alabamian, Watkins could not help but note the Crimson Tide's success under Bear Bryant and later with Nick Saban. That didn't mean he had to like them; like most in that state, cheering for Alabama or Auburn, one school or the other, is a sentiment rooted in childhood and seldom changed. As the city manager of Auburn in Lee County, extending courtesy to Brand X from Tuscaloosa is part of the job description.

Arkansas plays Auburn at 11 a.m. today in Jordan-Hare Stadium, Loveliest Village on the Plains and where Toomer's Corner is sure to be rolled with bathroom tissue if the Tigers win.

In the most sensitive areas, they dwell in the past in the state that produced George Wallace and Hank Williams. Jordan-Hare Stadium is named in part for a mostly beloved former Auburn coach, Ralph "Shug" Jordan, and the playing field honors another, Pat Dye, a Georgia man who found glory across the dividing Chattahoochee River. Statues of the school's three Heisman Trophy winners -- Pat Sullivan (1971), Bo Jackson (1985) and Cam Newton (2010) -- ring the stadium.

Auburn has been in and out of the NCAA doghouse but wins often enough in football to tolerate that. What galls Tiger fans is that Alabama wins at an even higher rate, especially against Auburn, making times hard for a coach who can't beat the Crimson Tide often enough. Tommy Tuberville, an Arkansan who might have coached the Razorbacks at one time, probably came closest. Though for beating Alabama six straight years, Auburn fans didn't seem to care much when Tuberville stepped down. It took forgiving fans on both sides to send him to the U.S. Senate from what has become a red state politically.

Most Arkansas fans neither love nor hate Auburn, although two straight Razorback losses in the series is a sore subject. Go no farther back than the 2020 game, Auburn kicking a winning field goal late, after a Southeastern Conference officiating crew disallowed a Razorback fumble recovery that would have settled things for the visiting side.

It slipped my mind that Arkansas hasn't beaten Auburn since 2015, Bret Bielema over Malzahn, in overtime at Fayetteville. Auburn won on my 2014 visit, rolling up nearly 600 yards on Bielema's second Razorback team, which would sweep LSU, Ole Miss and, in a bowl game, Texas. One of Danny Ford's highest moments came in a 1995 game at Little Rock, the Hogs jumping ahead 27-0 but needing a field-goal miss to hang on 30-28 against a Terry Bowden-coached with future Henderson State coach Patrick Nix, Bo's father, at quarterback.

Thankfully, Watkins lived to experience the 2010 national-championship team. (Though I'm sure he was asked, maybe personally, "How did y'all get Cam Newton away from Mississippi State?") Two more magic moments came in 2013, the "Miracle at Jordan-Hare" against Georgia and "Kick Bama Kick" against Alabama. Those games rate high on any Auburn hit parade with the 1972 Iron Bowl, the Tigers winning on two blocked punts taken "to the house," as announcers now say, by one David Langner.

Bryant, a former Crimson Tide player who likened Auburn to a "cow college," earned his record 315th coaching victory in the 1981 Iron Bowl. Letting Bo Jackson get away, Bryant retired a year later, saying his alma mater deserved better coaching, although I'm not sure Ray Perkins is what they had in mind.

At last check, Arkansas (4-3) was favored by 3.5 points over Auburn, the Razorbacks needing their past week off and having an experienced quarterback in KJ Jefferson, Bo Nix having transferred to Oregon.

The only wish here is that David Watkins were here to talk it over before and after. As with a church brother whose shirt at a midweek service contained an Auburn logo, this is a topic reasonable people can deal with. David might even throw in a "War Eagle" to let you know where he stood.