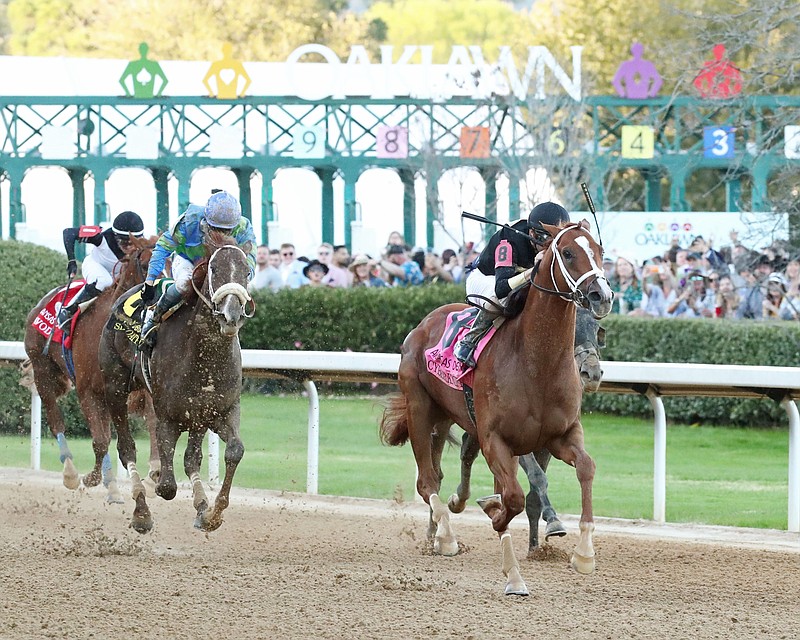 The 2022 Arkansas Derby winner has a chance to upset possibly the shortest-priced Breeders' Cup Classic favorite ever.

Cyberknife, April 2 winner of Oaklawn's $1.25 million Grade 1 race for 3-year-olds, was one of eight pre-registered Wednesday for the $6 million Classic Saturday at Keeneland Race Course in central Kentucky. Flightline, unbeaten through five starts, is a projected odds-on favorite going a mile and a quarter off a Grade 1 Pacific Classic victory that evoked comparisons with Secretariat's 31-length triumph in the 1973 Belmont Stakes.

"He kind of looks like LeBron James, who we have out here in LA," said West Coast-based trainer John Sadler, whose horse won the Pacific Classic by 19 1/4 lengths at Del Mar in September. "He's just a one-of-a-kind horse."

Sadler ended a personal 0-for-44 Breeders' Cup drought with Accelerate's 2018 Classic victory at Churchill Downs in Louisville. Flightline, in his 4-year-old season, is a favorite to give Sadler a second Horse-of-the-Year plaque even with a strong performance in defeat.

Sadler counted Grade 1 Travers winner Epicenter and last-out Grade 1 Pennsylvania Derby hero Taiba among "the ascending 3-year-olds." He threw in Kentucky Derby winner Rich Strike, whose last victory came at 80-1 odds in May at Churchill Downs. "And then you have those older horses that are terrific -- Life Is Good, Olympiad. A bunch of really nice horses."

Post positions will be drawn Monday at Rupp Arena in Lexington, home of basketball's Kentucky Wildcats. Keeneland, in the middle of a drought, got some rain during training hours Wednesday, and one of Flightline's owners said a "vigorous gallop from the world's most exciting and most talented horses we've seen in a generation" ensued.

Cyberknife, trained by Brad Cox, won a second Grade 1 race in the Haskell at Monmouth Park in New Jersey but has consistently run short to Epicenter, trained by Hall of Famer Steve Asmussen. Epicenter won the Grade 2 Jim Dandy and Travers at Saratoga after classic seconds in the Kentucky Derby and Preakness.

Jackie's Warrior, with a 12-2 record from 17 starts, won Oaklawn's Grade 3 Count Fleet Sprint Handicap in April. The MacLean's Music 4-year-old seeks to atone for last year's third in the BC Sprint when 1-2 on the board and in which he suffered a slight injury.