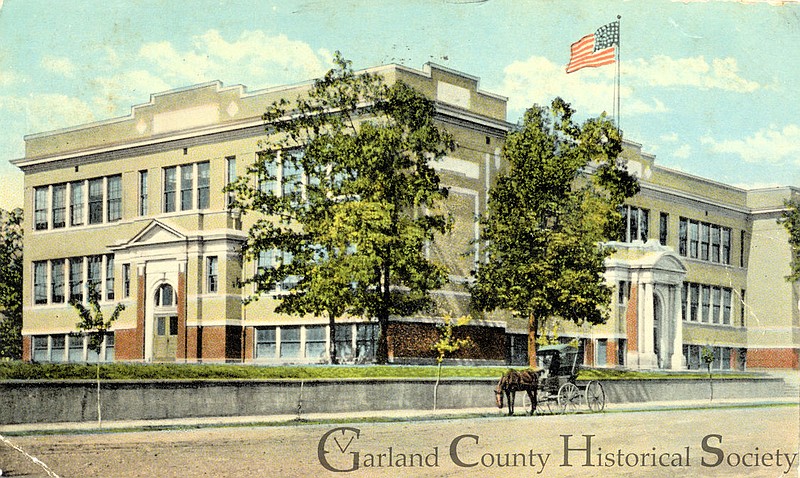 September brings thoughts of kids back in school. And when thinking of Hot Springs schools, one — Jones School — might leap to mind. It has a very special history.

Jones School would not have existed without the generosity and civic concern of Jennie Ann Ward Jones (later Smith). The owner of much of the area called Jonestown and, later, South Hot Springs, Jennie Jones donated land and built a log schoolhouse on Hobson Avenue in 1876. The cost of this subscription school was $2 per month per child, and Jones and Mae Webster were the first teachers. As the school’s enrollment grew, Jennie built a three-room white frame school building and hired well-trained professors. She also bought a large bronze bell, requesting that it be rung once a day when school was in session.

In 1883, Jennie sold Jones School and its property to Hot Springs School District No. 6 (which had formed in 1881) for $1,000. The school district built a four-room red brick school in 1901, adding another story in 1902. The school was known as Mrs. Jones’ School, Jonestown School, South Hot Springs School, or School Street School; the school board officially designated it Jones School in 1904. In 1912 the red brick building was razed, and the present tan brick building was erected, opening in April 1913. In 1932 during the Centennial Celebration of Hot Springs, a bronze marker was placed on the northeast corner of Jones School to commemorate the gift of the property for the first Jones School building by Jennie Jones. In 1950, a large auditorium added to the property.  In 1988, the building was added to the National Register of Historic Places.

Jones School was closed at the end of the school year in 1992. In its various structures, it had been in session for 116 years.

If the 1913 building could talk, it would doubtless describe the countless boys and girls who walked down its wide, black and white marble halls, studied in its high-ceilinged classrooms, trooped down to the cafeteria in its rather dungeon-like basement, and played in its bell house or on its large playground across Hobson.  It would certainly tell stories about its dedicated staff, including the remarkable Lelia Moorehead Conte, who served as principal from 1919 until 1955; teachers Mamie Henderson (there for forty-six years) and her sister Ruth Henderson (forty years), Willie Sims (forty-three years), Evelyn Hilliard and Effie Sullivan (thirty-eight years each), and many others.  It would happily recall the May Day Festivals with doll buggy parades, folk dances, maypole dances, and flag drills and perhaps whistle the tunes of the original operettas produced by teacher Mamie Ruth Abernathy.

The school would remember making room for the students from Hot Springs High School after their building burned in 1913 and that, during the Great Depression, its teachers helped feed Jones students by cooking donated beef in a large iron wash pot on the playground and preserving it with pressure cookers in the basement.

The building could tell new memories as well, for since 2003 the Administrative Offices of Hot Springs School District No. 6 have occupied the renovated structure.  One hundred and nine years after its construction, the distinctive building is still serving the children of Hot Springs. Jennie Jones would be proud.