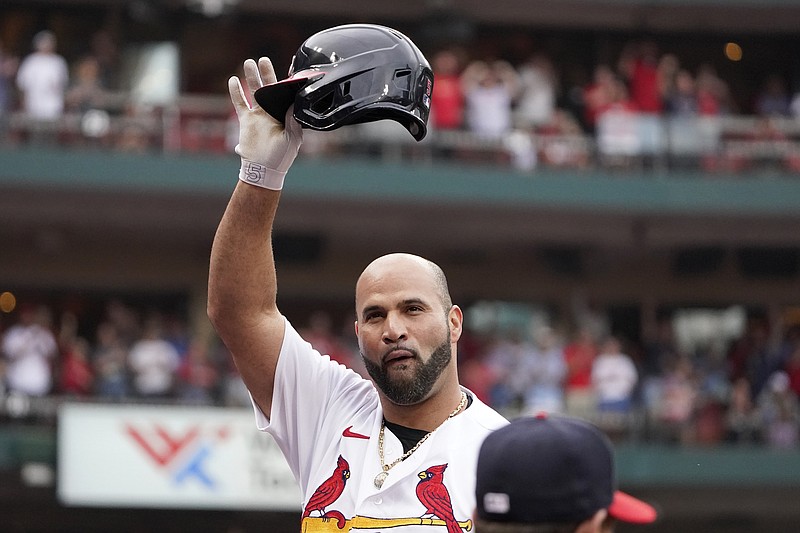 St. Louis Cardinals' Albert Pujols tips his cap after hitting a two-run home run during the eighth inning against the Chicago Cubs Sunday in St. Louis. - Photo by Jeff Roberson of The Associated Press

Pujols has seven pinch-hit homers in his career, and two this season. He has homered against a record 451 pitchers.

Mikolas (11-10) gave up two hits, striking out three and walking one. Ryan Helsley earned his 13th save in 17 chances.

Chicago starter Marcus Stroman allowed four hits in seven shutout innings. He struck out five and did not walk a batter in a 98-pitch outing.

Judge set a career high for homers, topping the 52 he hit as a rookie in 2017. He also doubled, singled and scored both New York runs.

Frankie Montas (5-11) allowed one hit over five shutout innings as the AL East-leading Yankees increased their lead to five games over Tampa Bay. The Rays trailed by 15 1/2 games on July 10.

Down 2-0, Tampa Bay tried to rally in the ninth against Clay Holmes, the fourth Yankees reliever. David Peralta led off with his second double of the game and scored on a one-out single by pinch-hitter Francisco Mejia.

Jonathan Aranda doubled with two outs before Holmes struck out Yandy Díaz looking at a 3-2 pitch for his 18th save.

The defending World Series champion Braves have taken five in a row and 20 of 25 to move a season-high 33 games over .500 at 84-51. They are within one game of first place in the NL East.

Fried (13-5) didn't allow a baserunner, retiring 12 in a row, until Nick Fortes walked to begin the fifth. Fortes was erased as a double play ended the inning before a rain delay of 1 hour, 51 minutes. Fried didn't return after the delay.

Miami, which managed three hits, has dropped a season-high seven in row and has been held to two runs or fewer in eight straight.

Pablo López (8-9) was given the loss. He allowed two runs and five hits with one walk and seven strikeouts in four innings.

Since becoming a full-time starter in 2019, Fried has 51 wins, second-most in the majors to the Yankees' Gerrit Cole (53).

The Dodgers, who have the best record in the MLB at 92-41, extended their lead over the Padres in the NL West to 19 games with 29 games remaining.

Thompson hit the second pinch-hit homer of his career, a three-run shot in the seventh inning. Smith hit his 21st homer of the season, a solo shot off starter Mike Clevinger (5-6), who lasted 3 1/3 innings and allowed five earned runs on four hits and two walks with four strikeouts.

Mike Trout helped the Angels avert a shutout with his 29th home run, a solo shot to center in the eighth inning off Astros' reliever Brandon Bielak.

Altuve chased Angels' starter Tucker Davidson (2-5) with a two-run homer to left field for his 23rd of the season. The All-Star second baseman -- who went 6 for 13 in the series -- also had an RBI double during a five-run second inning.

Urquidy (13-5) struck out eight and retired 12 straight from the third through seventh innings before Mike Ford lined a base hit to right field.

Kyle Tucker also went deep for the Astros, who have won five of their last six.

Hernandez lined a shot up the middle against Duane Underwood Jr. (1-5) with two outs to push Toronto in front, and the bullpen did the rest. The Blue Jays improved to a season-best 14 games over .500 (73-59) to maintain their hold on the third and final wild-card spot in the American League.

Toronto begins a four-game series against Baltimore, which is chasing Toronto for a postseason berth, starting Monday at Camden Yards.

Hernandez and Alejandro Kirk had two hits apiece for Toronto, which has won five of six and 12 of 17. Cavan Biggio hit his fifth home of the season and second in five days for the Blue Jays.

CLEVELAND -- J.P. Crawford singled in the go-ahead run in the 11th inning, Cal Raleigh added a two-run homer and Seattle beat slumping Cleveland for its seventh straight win in a game that was delayed by rain for 4 hours, 33 minutes.

With one out, Crawford bounced a single past Trevor Stephan (4-4) and into center field to score Eugenio Suárez, who began the 11th as the automatic runner. Raleigh, who homered twice on Friday, followed by belting a 2-2 pitch to right for his 22nd homer.

Matthew Boyd (1-0) worked out of a bases-loaded jam in the 10th and Chris Flexen pitched the 11th for his second save of the season as the Mariners completed a three-game sweep.

Seattle's rookie star Julio Rodríguez hit his 23rd home run of the season in the third, a solo blast off starter Cal Quantrill.

The Guardians' loss dropped them into a tie with Minnesota for first place in the AL Central.

Jose Miranda added a two-run double in the ninth inning as Minnesota salvaged the finale of the weekend series. Max Kepler scored on Kendall Graveman's wild pitch in the eighth, and Jhoan Duran turned in some impressive relief work.

The Twins finished with 12 hits. Correa connected in the fifth, hitting a two-run drive to left-center off Lucas Giolito (10-9) for his 16th homer. Bundy (8-6) pitched five scoreless innings to improve to 7-0 with a 3.15 ERA in 10 career appearances against the White Sox.

The Orioles fell 2 1/2 games behind Toronto in the race for the American League's third wild-card spot.

Martínez (4-3) was recalled from Triple-A Las Vegas on Aug. 28, for his fourth stint with Oakland this year. He finished with four strikeouts and two walks and retired 10 consecutive batters.

Oakland took a 1-0 lead in the second on a run-scoring single by Sheldon Neuse off Spenser Watkins (4-6).

Daulton Varsho hit his 20th homer and helped preserve Gallen's scoreless streak with a running catch on Tyrone Taylor's drive to right center in the second.

Jason Alexander (2-2) got the loss for Milwaukee.

NEW YORK -- César Hernández hit his first homer in more than a year in Washington's victory over New York.

The last-place Nationals took two of three in the series.

Luis García had an RBI single in the first inning, then the Nationals scored four unearned runs against Carlos Carrasco (13-6) in the third after second baseman Jeff McNeil's error led to two-run singles by Keibert Ruiz and Ildemaro Vargas.

Hernández's drive was his first since Aug. 26, 2021, a span of 155 games. Entering Sunday, only the Los Angeles Angels' Magneuris Sierra (223 games) and the Cleveland Guardians' Myles Straw (157 games) had gone longer without homering among active players.

Erick Fedde (6-9) gave up one run -- McNeil's second-inning sacrifice fly -- over six innings and earned his first win since June 21.

The Red Sox have a five-game winning streak as they try to climb back into the AL's wild-card chase. The Rangers have lost eight straight.

Bogaerts had an RBI double and run-scoring single in his three hits. His stretch is the longest for a Boston player since Kevin Youkilis tied the club record with nine in 2007.

Adolis García had an RBI double for Texas, which lost for the 15th time in 18 games in Fenway Park and fell to a season-worst 17 games under .500.

Reliever Kaleb Ort (1-1) was credited with his first MLB victory, and John Schreiber earned his seventh save.

Rangers starter Dane Dunning (3-8) took the loss and is winless in his last 26 road starts, the majors' longest active streak. His only career road victory came Sept. 9, 2020 with the White Sox.

MJ Melendez scored a run and drove in another while Michael A. Taylor had three hits and scored a run. Witt reached base three times.

CINCINNATI -- Aristides Aquino hit his first career grand slam an inning after entering as an injury replacement in the nightcap and Cincinnati split a doubleheader with Colorado.

Aquino entered as the designated hitter in the fifth after Jonathan India fouled a pitch of his right foot and was removed. Aquino's fifth home run of the season came off Chad Smith with two outs in the sixth.

India went 0 for 3, ending his career-best hitting streak at 16 games.

In the opener, Charlie Blackmon's pinch-hit two-run single highlighted a four-run seventh for Colorado, and C.J. Cron hit a two-run homer in the ninth for the Rockies.

SAN FRANCISCO -- Carlos Rodón reached the 200-strikeout mark for the first time in his career and Wilmer Flores hit a two-run homer with two outs in the ninth inning as San Francisco completed a three-game sweep and sent Philadelphia to its sixth loss in seven games.

Rookie Bryce Johnson, who got his first major league hit and RBI earlier in the game, drew a leadoff walk in the ninth for the Giants. David Robertson (3-2) struck out the next two batters before Flores hit his 17th home run.

Ranger Suárez was done after four innings for the Phillies and saw his winless stretch reach five starts since beating the Nationals on Aug. 6. 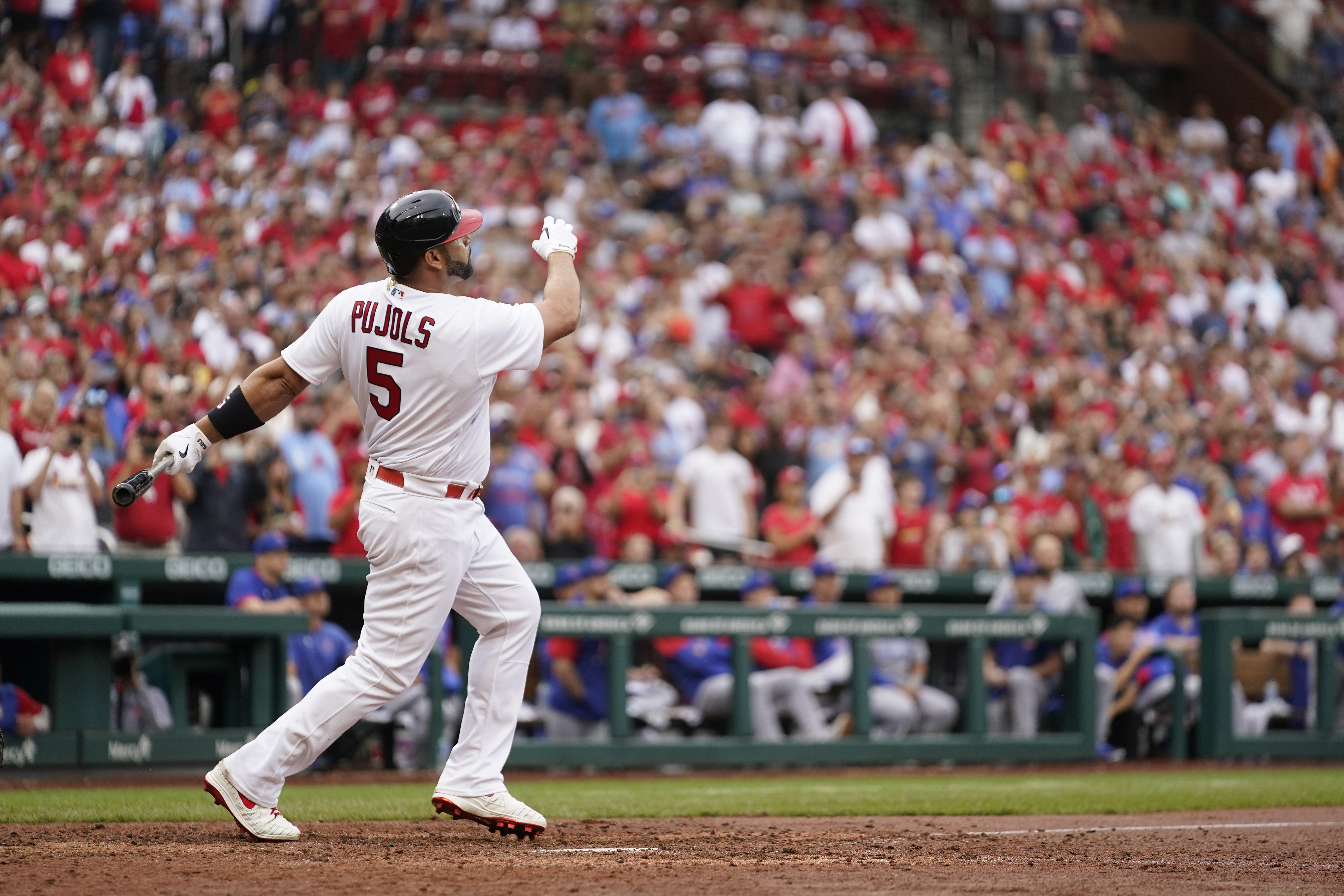 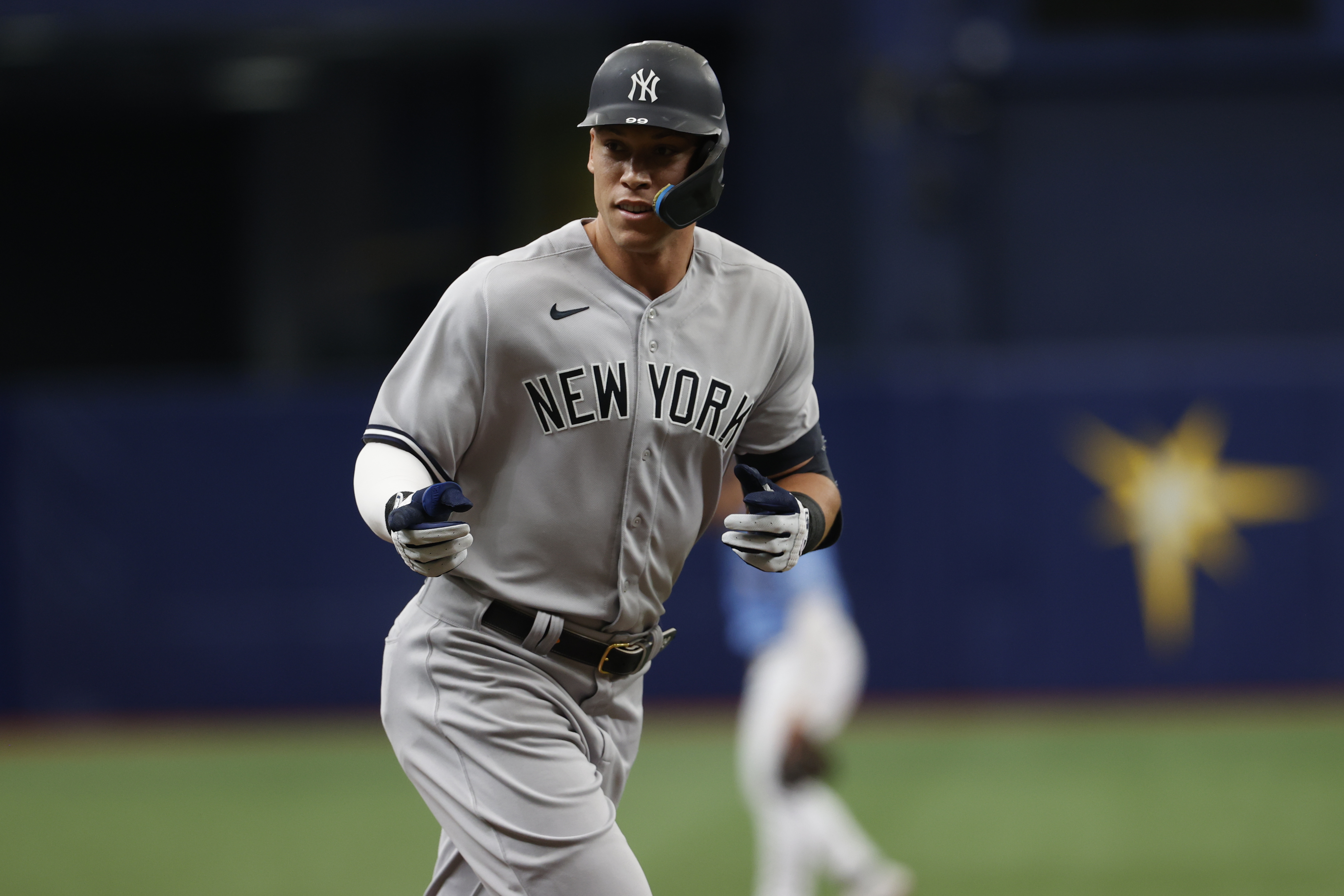 New York Yankees' Aaron Judge point to the dugout while circling the bases after hitting a home run against the Tampa Bay Rays during the first inning of a baseball game Sunday, Sept. 4, 2022, in St. Petersburg, Fla. (AP Photo/Scott Audette) 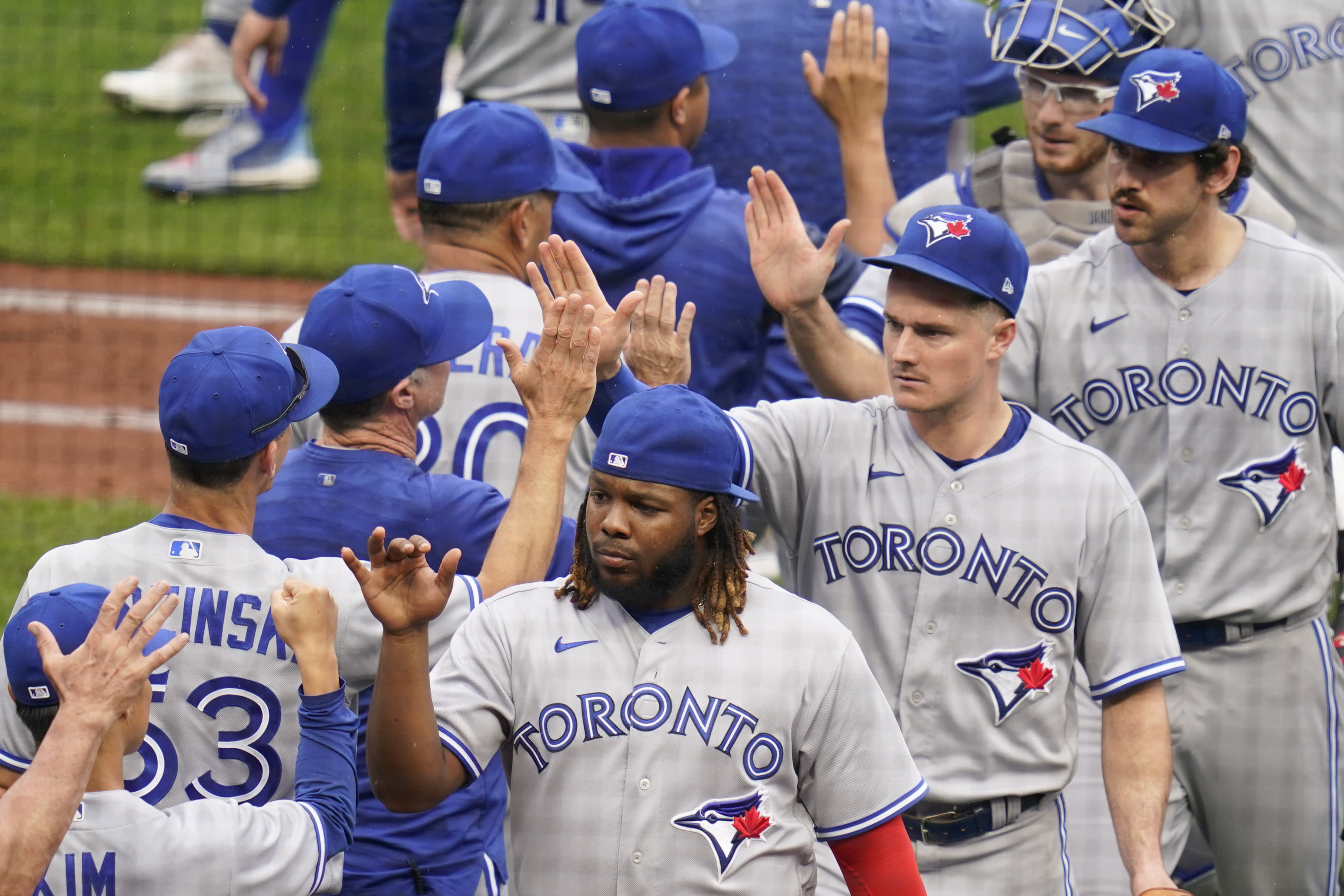