A new day in Britain delivers a king 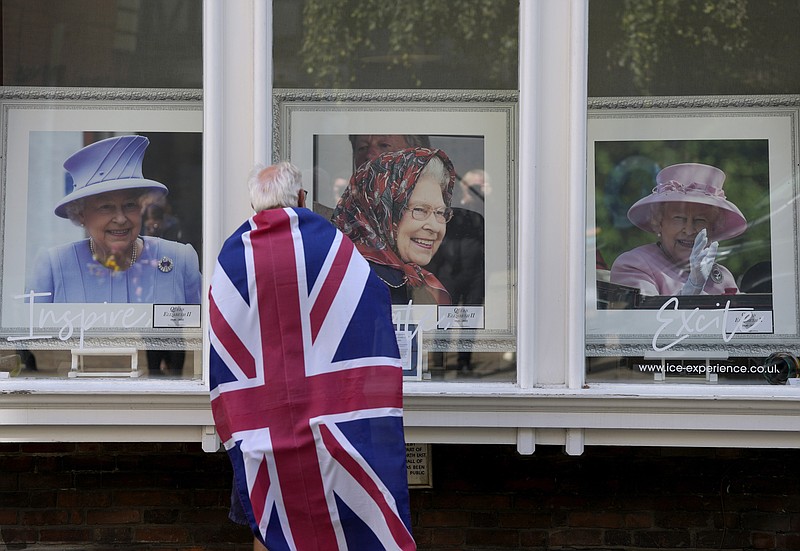 A man looks at framed portraits of Queen Elizabeth II in a shop window near Windsor Castle in Windsor, England, Friday, Sept. 9, 2022. Queen Elizabeth II, Britain's longest-reigning monarch and a rock of stability across much of a turbulent century, died Thursday after 70 years on the throne. She was 96. (AP Photo/Frank Augstein)

What crossed your mind first with news that Queen Elizabeth II, at 96, had shuffled off this mortal coil, to quote Shakespeare from "Hamlet"?

Among the first things, I guess, was that after all these years of apprenticeship, a king would command the British throne. Even so, just as "O.J. on the loose" was an improper choice for headline writers in June 1994 after a low-speed chase by Los Angeles police of a white Bronco, "Charles in Charge" seems a little tacky now.

I thought of Dame Helen Mirren, who received the 2006 Best Actress Oscar for her portrayal of the monarch. The queen's conduct in the wake of Princess Diana's death was dredged up again, casting the monarch in less than favorable light.

Oaklawn racing fans might remember that the queen dined with jockey Calvin Borel after his first of three Kentucky Derby victories in 2007. Jerry Hissam, Borel's agent, broke the news and said he wouldn't be attending that white-tie affair in the White House. Someone had to stay home and book Calvin's mounts, you see.

And who could forget the queen's comment after a particularly odious year in royal affairs that England had just experienced "annus horribilis."

Elizabeth served from February 1952, upon the death of father George VI, totaling 70 years. She outlived husband Prince Philip by 17 months, the Duke of Edinburgh dying two months short of his centenary. Together they had four children: Charles, Prince of Wales; Andrew, Duke of York; Anne, Princess Royal, and Edward, Earl of Wessex. She was preceded in death also by the Queen Mother, who lived to 101, and a sister, Margaret, Countess of Snowdon.

This is written for the benefit of those who do not devote much time to the English royal family or see any reason that one should.

The queen was not an elected official, like prime ministers Margaret Thatcher and Tony Blair. Winston Churchill, mighty figure that he was, served at the behest of others and was voted out of office, yet remains the one Brit, along with the queen, that many remember.

The royal family has come under attack in recent years, not altogether without reason. When personal lives spilled over into British tabloids, it became open season upon the queen and her court. Elizabeth's passing, while something many not expected to see -- amid hope she would see her 100th birthday -- did not carry the shock value of Princess Diana's passing in a Paris tunnel in 1997.

Will Sir Elton John, whose "Candle in the Wind," in honor of Marilyn Monroe, topped the charts upon rerelease after Diana's death, have something for this occasion?

No recounting of Elizabeth's life is complete without mention of Princess Margaret, the latter with no chance of wearing her sister's crown. Margaret, one reads, could be icy in public, though if the stories be accurate, she and Elizabeth lived in peaceful existence considering their different roles.

The British, at least until recent times, were recognized for keeping a stiff upper lip. In short, they abounded in pluck, representing in its usage as a noun "spirited and determined courage." With such a world view, the Queen Mother could stare down Hitler before World War II and the Commonwealth move on after Edward VIII's earlier abdication "to marry the woman I love."

One reason, I guess, that flaws and all, England has been in business, pretty much like we know it, since 1066, through a day when it was said the sun never set on the British Empire. This is a different day and, after this time, another British monarch reigns.

The former American colonies, who fought Britain for their independence, have been trying to get a handle on democracy going on 300 years. Read the headlines or flip on a TV to see how that's going.

As for England, the time has come for Charles to succeed his mother, the queen. In our time, he has become something other than QE2's son and Diana's husband. One hopes he learned something through that lengthy apprenticeship.

Print Headline: A new day in Britain delivers a king