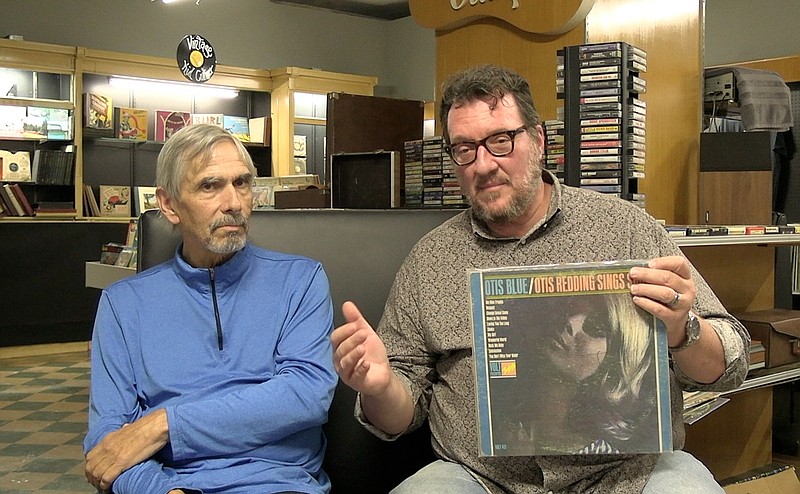 Tom Coleman, left, and Mark Maybrey describe their passion for vinyl records. - Photo by Andrew Mobley of The Sentinel-Record

Few collectibles can speak directly to their owner like a vinyl record, issuing forth the fundamental human art form of music.

It is that elemental nature of music as well as the warm, full tones and tangibility of vinyl that keeps record collectors like Mark Maybrey and Tom Coleman hooked.

"My first record experience was Elvis' 'Hound Dog' and 'Don't Be Cruel,'" Maybrey said. "My mom was an Elvis fan. We played it until it was worn out in the middle. My first 45 was Three Dog Night's 'Joy to the World.' And from that point on -- I grew up in the late '60s and '70s, vinyl was king -- just kept buying vinyl, listening to it.

"It kind of faded for a little bit. When I moved to Muscle Shoals, about 2012 ... I found this ... old-time, father-son record store and found (a) monthly meeting. I had probably two tubs of my personal (records) and then I went crazy. Back in 2012, you could find vinyl everywhere -- before the big boom -- in thrift stores, antique stores. And I went from those two tubs and now my collection is approaching 7,000 records."

Maybrey said his first love was blues, then classic rock, but through his time in record clubs and organizations his musical interests expanded to include psych rock and jazz, introduced to him by fellow enthusiasts. The social aspect of music sharing not only allowed for collections to grow, but communities, as well.

In 2017, a year after he moved to Hot Springs, Maybrey organized a group of vinyl collectors called the Hot Springs Spin Doctors, inspired by the monthly meetings held at the record store in Muscle Shoals that rekindled his passion for record collecting.

"We're going to revitalize that and start it again here -- COVID threw us for a loop and we didn't have a good big place, because we usually have 18 or 20 people show up. So, we're going to be here with the Spin Doctors," Maybrey said.

"And Beau and Tom, since they're gracious to let us use their facility, they're going to be bringing albums from their personal collections. And we sit and listen and then just talk about the album. There's a lot of trading, people bring stuff."

Coleman is the owner of Downtown Record & CD Emporium, a new record shop in the lower level of The Arlington Resort Hotel & Spa, 239 Central Ave., that just opened in August and held its official grand opening on Sept. 2.

"I think that any person that owns a record store was first a collector and is still a collector. Some people put their collections up to start their stores, but in reality, if you think about it, every record in here is part of my collection," Coleman said.

"I sell some, new stuff comes in. There is always the part of your collection that you never sell -- it stays with you and travels with you and it goes from store to store, decade to decade in my case," he said.

Coleman acquired the vinyl-collecting bug in the late '60s and early '70s, becoming a fan of British bands like The Rolling Stones, The Beatles, and The Kinks.

"They just did it for me. I couldn't get enough. And so I caught myself out just searching for everything by them," he said.

Every record collector has their "holy grails," as Coleman puts it, and one of his is an extremely rare album.

" ... Came out in 1970 in England. It was by a band called Room, the album was called 'Pre-Flight,' and it was just this amazing collection of progressive rock, psychedelic, even a little bit of English Folk, and all done -- not only proficiently, but with a master's touch ... just this amazing record that nobody bought," he said.

Coleman finds himself compelled to search through the record stores of any town or city he visits in the hope that one day he will be flipping through records and find the album, or the other "holy grails" that have eluded him.

"You do have to show a bit of caution sometimes when you're out shopping because no matter how much money is in your pocket, if you see something and you have to have it -- if that's rent money, if that's your electric bill -- that record's going home with you," he said.

"You know, with every new generation, there's phases. Everybody was into the whole streaming thing and it was all very convenient, but the bottom line is that they were missing the ritual -- the ritual of vinyl ... you can have CDs that sound just absolutely perfect, flawless, but in the end, maybe music wasn't intended to be flawless. Maybe it was intended to sound like you're sitting in the room with the musician."

The Hot Springs Spin Doctors will meet at Downtown Record & CD Emporium on Friday, Sept. 30 at 6 p.m. All are welcome to stop by, enjoy music and talk with fellow enthusiasts. 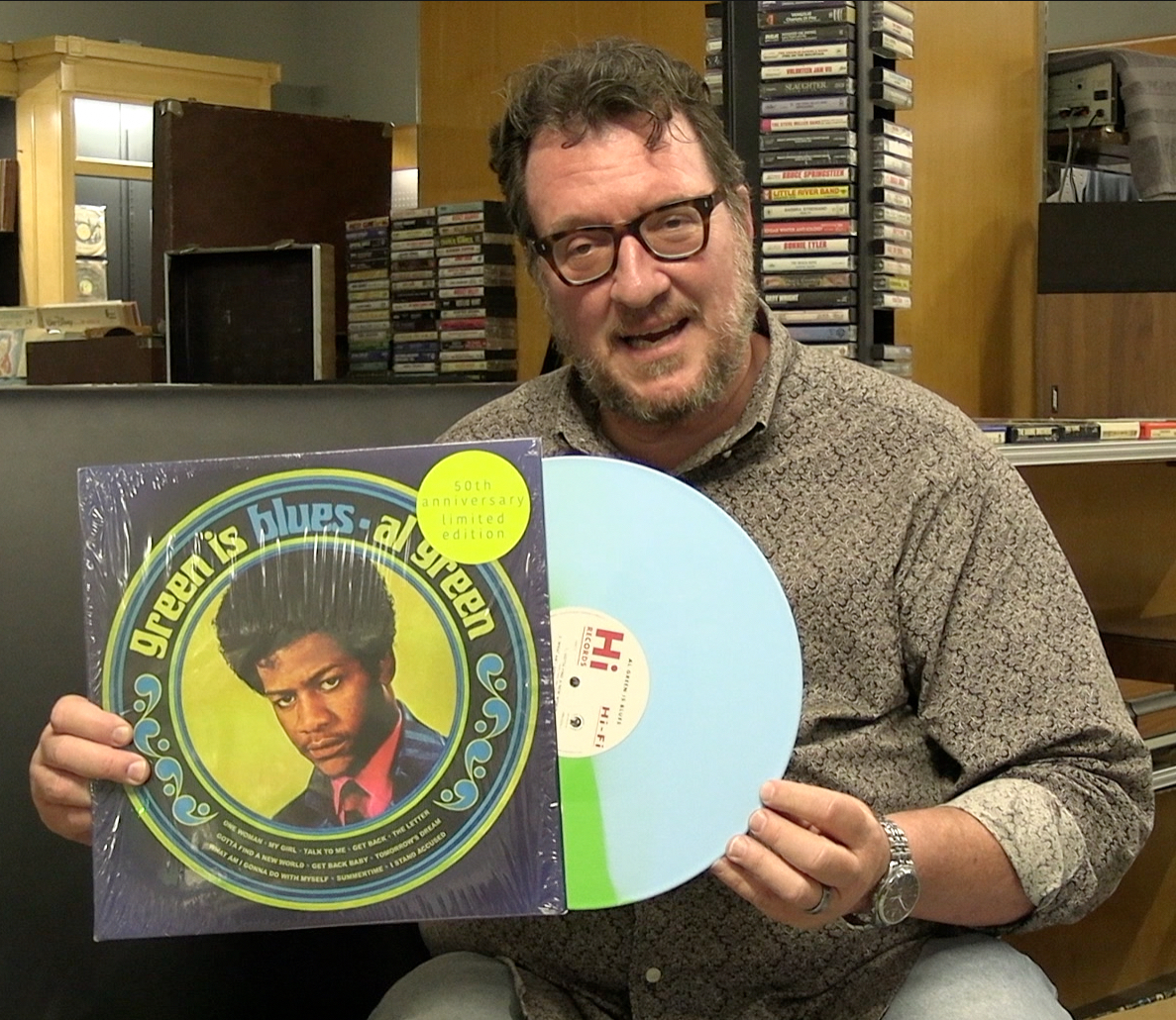 Mark Maybrey shows his Al Green "Green is Blues" 50th anniversary limited edition album; note that the record itself is green and blue. - Photo by Andrew Mobley of The Sentinel-Record 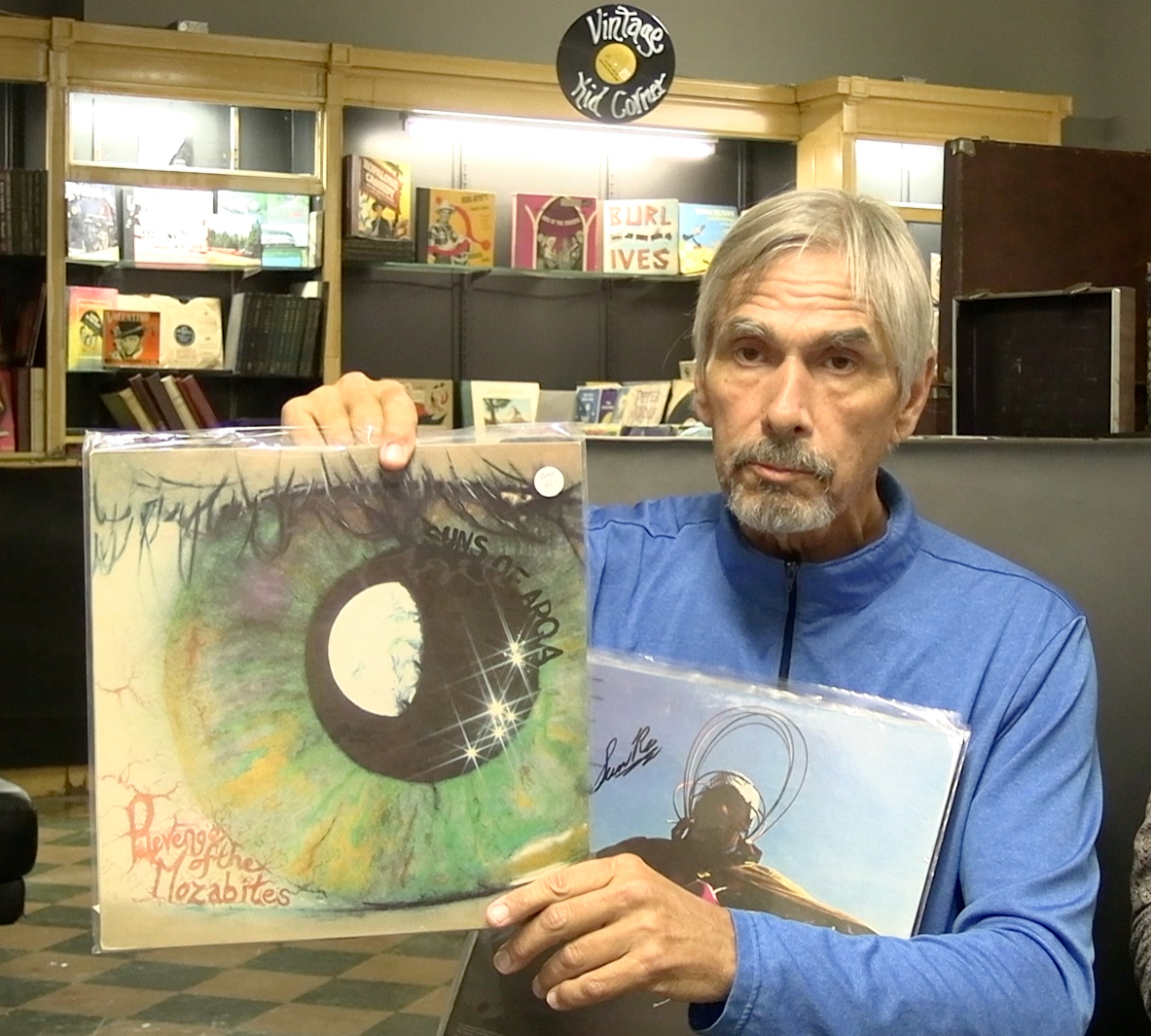 Tom Coleman shows his "Revenge of the Mozabites" album from the Suns of Arqa, a record a friend introduced him to years ago. - Photo by Andrew Mobley of The Sentinel-Record 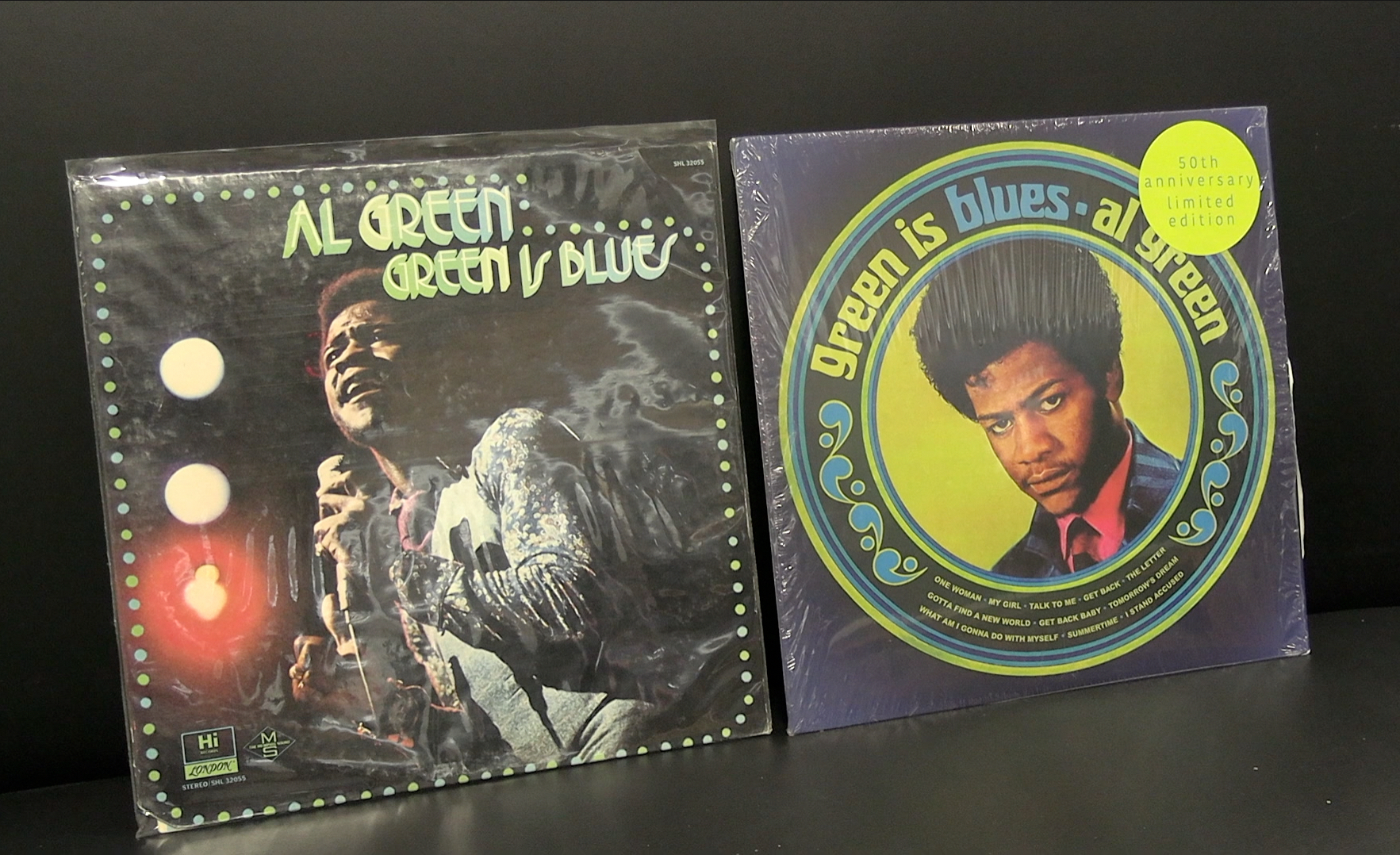 An original pressing, left, of Al Green's "Green is Blues" album and a 50th anniversary limited edition. - Photo by Andrew Mobley of The Sentinel-Record 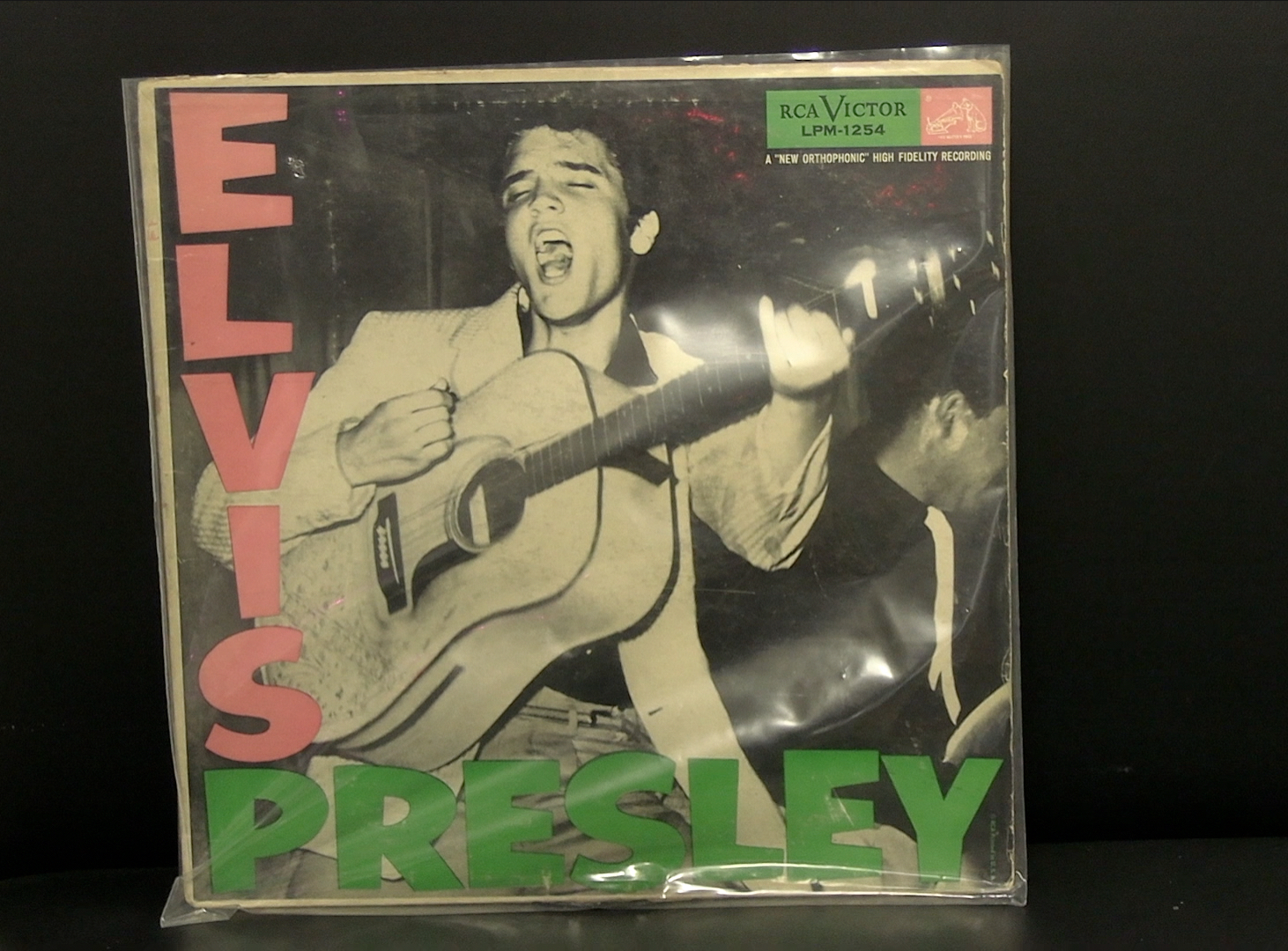 Elvis Presley's first album, one of the thousands of records in Mark Maybrey's collection. - Photo by Andrew Mobley of The Sentinel-Record

Wilburn Burchette "Opens the Seven Gates of Transcendental Consciousness," one of the trippier albums in Tom Coleman's collection. - Photo by Andrew Mobley of The Sentinel-Record