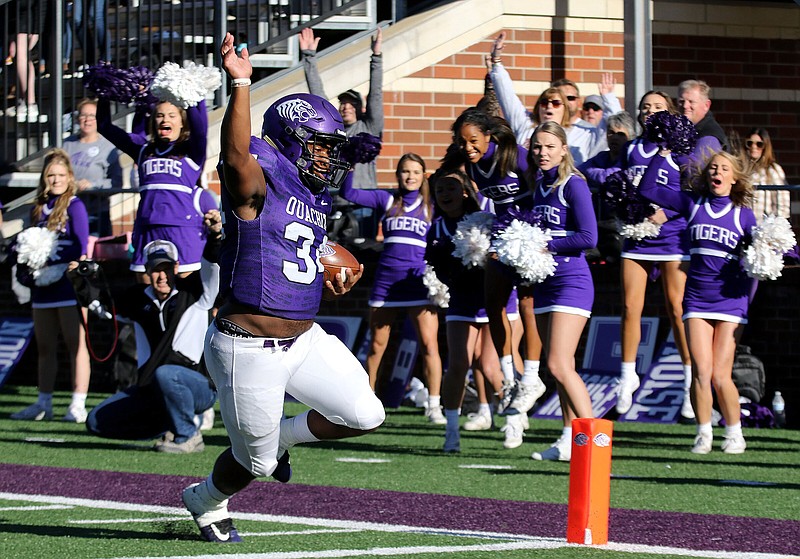 A file photo shows the Ouachita Baptist Tigers in action in 2021. - Photo by Thomas Metthe of the Arkansas Democrat-Gazette

I must have been sleeping or fixating on the Razorbacks when a one-time Arkansas Intercollegiate Conference staple became a crackling-hot football rivalry.

Harding vs. Ouachita Baptist has taken on a dimension in the Great American Conference that it never enjoyed in the gone-but-not-forgotten AIC. Not up to Battle of the Ravine status, mind you, because Ouachita vs. Henderson State is a rivalry to be treasured for all time, truly an Arkansas original.

But as long as graduates from either school work in the newspaper business, Harding vs. Ouachita is not likely to suffer from publicity. Rex Nelson, a senior editor at the Arkansas Democrat-Gazette and OBU alum, has broadcast the Tigers on radio almost since Marconi invented the instrument. Your humble servant, though he writes more on racing and the Razorbacks, also has a keen interest in doings at Searcy, where the once-Morrilton based school is no closer to the foothills of the Ozarks, as the alma mater states, than when I attended classes in the 1970s.

It will be interesting to see if interest in OBU sports rockets if alum Sarah Huckabee Sanders is elected governor. It is fairly safe to say that Joe Biden did not carry either campus in the 2020 presidential election, Harding and Ouachita both supported heavily by church alumni (Church of Christ and Baptist, respectively) and anchored in conservatism.

I would no more expect William Jefferson Clinton to deliver the commencement address at Harding than Sanders to trash Donald Trump, her political benefactor and former boss.

I have friends on both sides of the aisle, some former Harding classmates becoming football assistants and with Ronnie Huckeba enjoying a long stretch as head coach. David Sharp graduated at OBU in 1980, three years after myself at Harding, and, as athletic director, has led the Tigers to dizzying heights in a number of sports, football most prominently.

Sharp's neatest trick, one of them, is keeping Todd Knight as head coach into his 23rd season. The Tigers won the inaugural GAC football championship in 2011 and added four more in the last decade.

Knight worked Arkansas high schools heavily during a decade of discontent at the state university and came up with the in-state transfer of the decade, Shiloh Christian product Kiehl Frazier starting his career at Auburn and, with his second set of Tigers, leading OBU to the 2014 conference title. The Tigers' 2014 road victory over Harding is one of the great college games played in Arkansas.

Both teams are 3-0 and ranked top 10 in NCAA Division II before Saturday's 7 p.m. kickoff at Arkadelphia.

They'll be playing on A.U. Williams Field, like they have for years at OBU, in a stadium renamed for NFL Hall of Famer and Tiger alum Cliff Harris, a two-time Super Bowl winner with the Dallas Cowboys after signing as a free agent in 1970. If nothing else, Cliff helped a lot of people learn to pronounce Ouachita correctly

Ouachita comes off a 66-14 thumping of Arkansas Tech in Russellville while Harding, on its home field, scorched Southern Arkansas 33-17. The Bisons lead the series 33-25-4, snapping a two-game skid to the Tigers with last year's 38-21 victory at Searcy. Paul Simmons, longtime defensive coordinator under Huckeba, led the Bisons to the national playoffs each of his first three seasons as head coach, reaching the semifinals in 2017.

All I care to predict is that fans will see a spirited game and probably leave the stadium feeling encouraged about American youth.