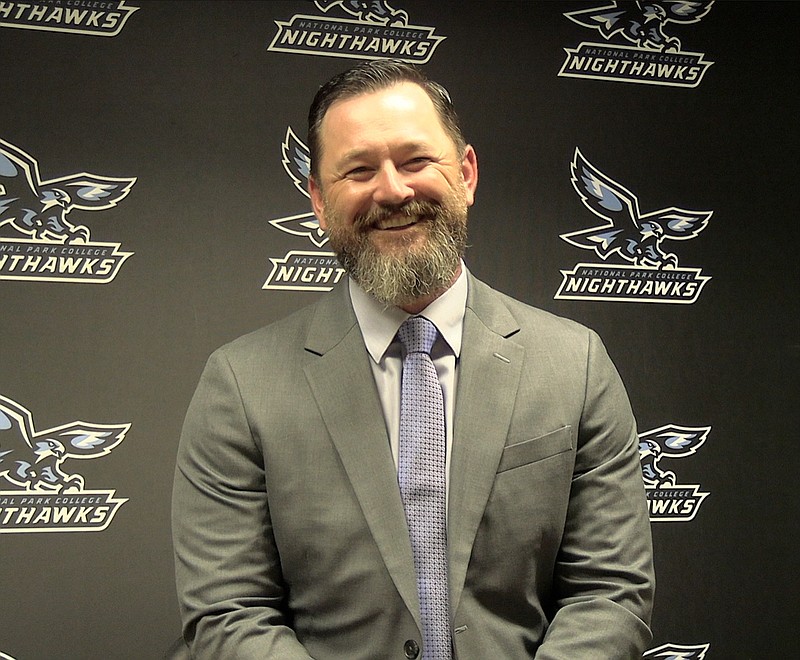 New National Park College interim athletic director Rich Thompson takes over from Jason Hudnell after Hudnell moved to a full-time role in admissions. - Photo by Andrew Mobley of The Sentinel-Record

It seems like any time someone sees National Park College, there is a construction crew expanding the campus.

This time, change is coming from within.

Long-tenured athletic director Jason Hudnell has worn many hats in his 18 years at the college. He was recently asked to step into a full-time role in the admissions department and out of his athletic director and head cross-country coaching roles.

"He has been in admissions and that was a shared role," National Park College President John Hogan said. "There is a lot of bandwidth involved with athletics and admissions. As our programs have grown I made the decision to split those two up."

Hudnell has been part of the athletic department during the five years National Park built its athletic programs. He was the first head basketball coach, athletic director, and then head coach of the cross-country program.

"Those are two significant functional areas in the college," Hogan said. "They peak basically at the same time and they are both 24/7 kinds of jobs."

"At this point we are going with an interim role," Hogan said. "So we have not done a search and coach Thompson agreed to do that until we evaluate just what our resource needs are for athletics. It has grown so rapidly. "It is hard for us to evaluate that in a short period of time."

Thompson's resume includes pitching relief in the major leagues for the Angels, Athletics and Blue Jays. He also won silver at the Athens Olympics. The Australian owns The Practice Field training center and is on the Majestic Park board.

"Mate, it is really exciting," Thompson said. "I have been here since the inception of baseball. I have been working hand-in-hand building the athletic program from the beginning on the baseball side. It is a very exciting time in athletics and obviously for me getting to continue the relationships with our coaches. This athletic program is only as good as they are and the students that they bring in."

"We are going to keep our continuous improvement pace going," Hogan said. "It is an investment and a continued investment. We are not backing away from improving that experience for student-athletes and doing whatever we can to do that. That is the way we try to approach and evaluate everything."

Thompson highlighted that he would continue to be the head baseball coach.

National Park is coming off its best conference season in baseball yet.

"We won more games in program history," Thompson said. "We had an All-American, and we had seven academic all-Americans. On that side we are continuing to grow and we are getting better on the field."

Expansion into more sports is always on the table for National Park.

"Our board is supportive of further expansion of athletics and our student-athletes are in support of it," Hogan said. "We would just have to figure out how to make sure that golf and volleyball, if they chose our program, the best way to support them. We have some facility obstacles we must overcome. We are in a major gifts campaign now to try to remedy some of that."

After his run in professional baseball came to an end with a back injury, Thompson settled down in Hot Springs with his wife, who is a Hot Springs native.

"This is such a great thing so once you are a player you are always an ex-player right," Thompson said. "So we are always looking for that next opportunity and this was something that, not fell into my lap, but I was seeking something for the next period of my life and this has become a passion project. I love it. I love it to death and my children love it. The community loves it. We want to grow that community base as well and pass that knowledge onto the student-athletes and make them great individuals."

National Park has 174 current student-athletes and nearly all of them came to the school solely because of the athletics programs now offered by the college.

"I think our best attribute and what makes us different from other institutions is that we are intentional about listening to the voice of our students and willing to make some sacrifices to try to meet those challenges," Hogan said. "Athletics is very difficult to pull off. Housing is very difficult to pull off, but students expect that. We ask them what they need to be successful and how they want us to invest in them."

"The amazing thing about athletics right now, it has brought international students to the college and we actively recruit internationally," Thompson said. "It is beautiful to have the multicultural situation here on campus. It gives us such a life blood, seeing students running around everywhere now. It is exceptional."

"The beautiful thing is I have already been here," he said. "I have established relationships with every one of our coaches and they are exceptional coaches. What we are going to do going forward is keep that family atmosphere. We all support each other. We come to each other's games. We want every Nighthawk athlete to be a Nighthawk athlete as a family, not just a baseball, softball or soccer player. We want to be combined and as close as a family as possible."

With Hudnell also leaving the cross-country head coaching role, Jason Armitage is taking over as head cross-country coach after being with National park for 30 years.

National Park College continues to grow and expand rapidly, and Thompson and his team seem excited to find out what is next.