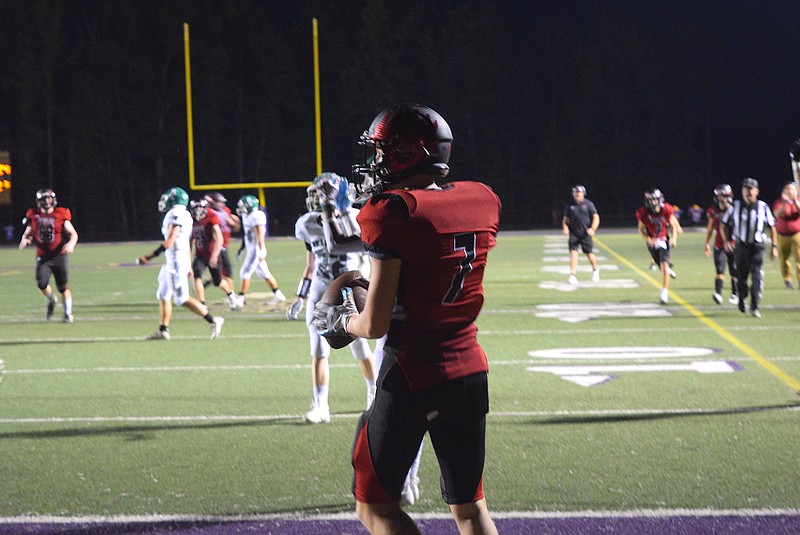 Cutter Morning Star's Drew Newlin (7) stands in the end zone against Genoa Central at Allen Tillery Field Sept. 16. The Eagles plan to play in their renovated stadium Friday night. - Photo by Donald Cross of The Sentinel-Record

The Cutter Morning Star Eagles are set to break in their renovated stadium under the lights Friday against the Trojans of Subiaco Academy.

The Eagles' are searching for their first win of the season and could make this group of 8-man football players the first to win in history in the new facility.

"We are working through some final touches on the bleachers to make sure they are safe," Cutter Morning Star head coach Nick Finley said. "Power will be done (Tuesday) or (Wednesday). As of right now we are planning on playing at our place."

Subiaco Academy (1-2) is coming off an impressive 56-28 win against Marshall, and Cutter Morning Star (0-2) is heading into the contest after a 48-16 loss to Genoa Central.

"I think it is going to be a good matchup for us," Finley said. "Subiaco is coming off a big win against Marshall where they scored 56 and only gave up 28. We have got to overcome some position stuff. After watching film and everything we have some guys who must step up."

Subiaco lost its first two games and never could get the offense rolling. However, a quarterback change sparked the win at Marshall. Senior Nick Gehrig has racked up 286 passing yards on the season.

"They changed the quarterback last week against Marshall," Finley said, "and started putting up 60 points."

In his first start of the season against Genoa Central, Cutter Morning Star quarterback Peyton Mills racked up 244 passing yards, 42 rushing yards and accounted for two total touchdowns. However, he did have three interceptions.

"Offensively we moved the ball but when you miss balls thrown to you and they hit you in the hands, we must come up with those," Finley said. "Defensively we just must break down some key techniques for some guys and make it a little bit easier to be able to react. We did not do a very good job of stopping the run. Play action hurt us as well. We must get our eyes trained back up and make sure we are reading our keys the right way."

Genoa Central had not allowed a score all season until Cutter Morning Star.

"I was really impressed with our offense," Finley said. "Obviously not having senior tight end Clayton Weldon in for a little bit in the first quarter hurt us."

Weldon had an 80-yard reception to set up a touchdown. He also tallied eight tackles, two sacks and 115 receiving yards last week.

Finley said the Eagles had momentum going into halftime and after a quick turn over to start the third quarter a possible score would have turned the game on its head.

Subiaco's worst performance was a 36-6 loss to a very strong Mountain View team with strong defensive and offensive line play.

"We cannot be sloppy," Finley said. "They will exploit some things. Reading some of their key players and putting them in a position to be wrong is going to help us on some of our read plays."

Subiaco Academy's Anthony Gehrig plays both football and soccer. He racked up three catches and a touchdown against Marshall.

Finley said there are some areas in 8-man a team can take advantage of on the field. The team just has to get the ball off and be able to run the ball when it needs to during the game.

Subiaco junior Brody Koch is only 5 feet, 8 inches tall but is all over the field with 129 rushing yards, two touchdowns and two fumble recoveries. He averages 16 tackles per game.

"You must be able to come out and score points when you have too," Finley said. "We cannot get over the 16-point hump right now."

Subiaco plays with three down linemen defensively and one linebacker over the top with man coverage on the outside.

"We must spread it around," Finley said. "Going through the stats after the game I thought we did a good job of getting everybody the ball. We cannot just give it to one person or two people. Real big emphasis this week on having some other guys step up and making some big plays."