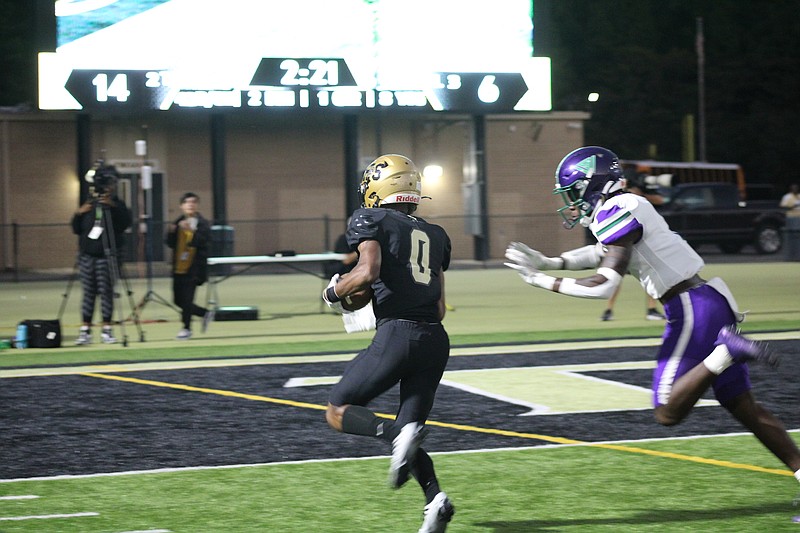 Every Friday night of the season, my heart goes out to Arkansas sports writers who cover games between teams they know little about at locations for which they might need a map.

And then to have some editor (probably the one who made the assignment) harp on confusing the mascots, not everyone knowing a Sand Lizard from a Blue Devil. Heaven help when two sets of Tigers are playing and both coaches, from whom one might glean most of the information, are named Smith or Jones.

A former high school writer for the state newspaper -- from Illinois, if my memory be accurate -- once explained his plight in print, confessing to his readers, "I don't know Dollarway from Safeway."

Even, I guess, if one gives green stamps to its customers and the other doesn't.

This came to mind when Little Rock Southwest played at Hot Springs last week. Competitive aspects were over by halftime, Hot Springs leading 35-6 en route to a 61-30 victory. Hot Springs, I read, came after Southwest with a phenomenal air attack like B-17s.

They played on what was known in my time as Tommy Holt Memorial Field, Southwest's coach (Daryl Patton) with a championship background, which opposite number Darrell Burnett noted during the week. The Gryphons were overmatched against a team playing at home and stinging, after an open date, from a one-point loss to Arkadelphia, which might be playing in December. Southwest was coming off only the second victory in the program's three-year history (30-29 over Rogers Heritage) and clearly still in the building stages.

The hometown Trojans can expect a clearer picture tonight when another Little Rock team, Parkview, comes to town. Though losing 28-27 in two overtimes Friday night, Parkview went against North Little Rock, which usually has something to say about the Class 7A title, though Bryant has won four straight championships in the state's largest division.

The Parkview-Hot Springs game shapes up as a keepsake between schools with past glories, the Patriots under teams coached by Sam Goodwin and the Trojans in a program unearthed by Bobby Hannon and continued by Joe Reese. Burnett has Hot Springs on the move and the Bolding brothers, Buzz and Bobby, lead Parkview. Why the statewide newspaper did not include it in its best games of the week is a puzzler.

Hot Springs vs. Southwest carried no such gloss, though that surely would have been different if Cedric Cobbs and Wallace Snowden still played. Cobbs excelled at Arkansas after a glorious career at Little Rock Fair and Snowden, another Hot Springs player the Razorbacks couldn't quite add to the roster, landed at Missouri, Wallace later doing some part-time work for this newspaper.

Fair and McClellan high schools -- the McClellan Crimson Lions defeating Hot Springs in a 1970s state final -- merged in 2020 to form Southwest High. Any progress the Gryphons, as they call themselves, make will be duly noted with Central and Hall, long the big names in Little Rock prep football, becoming basketball enclaves.

Another local game this week sends Siloam Springs to Lake Hamilton. Connect the dots on a map for an idea of the expenses required for a trip from Benton County to Wolf Stadium.

The Arkansas Activities Association, for which a geography degree is not needed for membership, calls Lake Hamilton vs. Siloam Springs a conference game. At least they're in the same state.