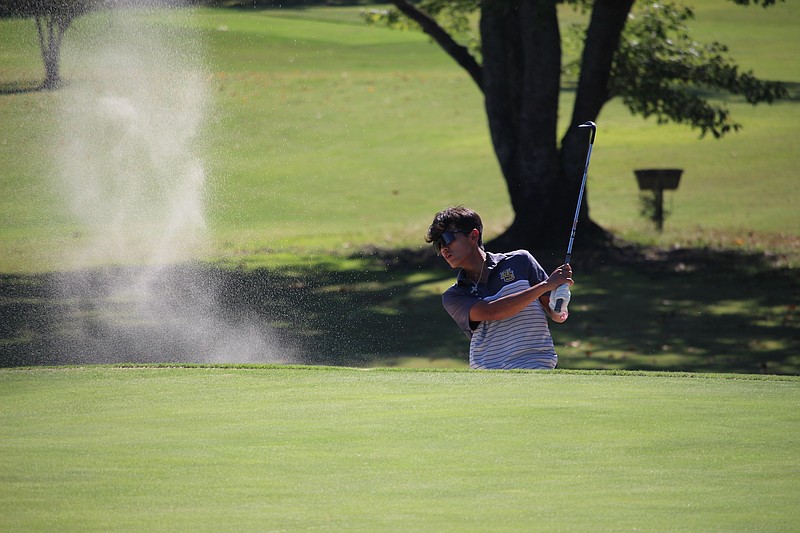 A large crowd gathered on the 18th green of the Park Course at Hot Springs Country Club in intense heat Wednesday.

The crowd came to watch the conclusion of a hard-fought battle between Lakeside's Will Gordon and Benton's Paxton Lane in the 5A-South conference golf tournament.

Gordon came out on top as medalist with a score of 66, just edging Paxton who finished with a 67 to cap the pair's epic duel throughout the day.

"Yeah I really enjoyed it," Gordon said. "After starting 5-under through five it was kind of hard to keep up the pressure but I was able to finish up with a couple of birdies on the par-5s and birdied 14 and got myself in good position."

The Lakeside sophomore said he did not expect to shoot a 66 heading into the match.

"Stepping on hole seven I wanted to keep going low but I happened to make a bogey," Gordon said. "It was a grind. I had to keep hitting fairways, had to keep hitting greens and just trying to make pars. Then eventually putts started to fall, and I was back at 6-under before I knew it."

"Girls played really good," Lakeside head coach Brandon Burton said. "We've got two seniors that kind of led the way all year and two freshmen that have kind of battled for that third spot. Payton Bourland played really well today. Shot an 84. Probably her best round in tournament play this year. She played really well. Real happy for her. Then Maggie and Brooklyn have been steady like they are all year. Then Jaden had a good round. So we feel good about heading into the state tournament."

The Lakeside boys team finished second with a team score of 311. Although Lane claimed runner-up medalist honors, the Benton team took the overall boys title after finishing with a score of 301.

"Boys played good," Burton said. "I thought Graham, he kind of grinded down the stretch. He didn't get off to his best start. He kind of fought through it. Same with Hunter and Reed. They didn't have probably their best game today but still fought through and battled. Then Maddox has been real steady for us all year. He came in and played well and hit fairways and greens."

Lake Hamilton's Brode Horton qualified for state individually with his round of 84. Lake Hamilton head coach Brandi Higginbotham said this was one of her best boys teams she has had, but the rest of the 5A-South competition is just so strong.

"Benton, El Dorado, Lakeside, gah they're all so good," she said. "We were hoping to try to get in as a team again but when you look at their scores it's just hard to do with those guys. This is my best group of boys -- top four scores anyway, compiled scores."

"Tournament play just kind of jacks everybody up," Higginbotham said. "For that situation I thought they did pretty well."

Lake Hamilton's Jordyn Garner qualified for state with a round of 95.

"We are pumped about that," Higginbotham said. "She kind of was concerned about that score. But she put a 95 and that's her best she's ever shot. I was pretty excited about that."

Hot Springs only fielded two boys golfers and did not register a team score. Cade Miller qualified for state with an 87, but Warren Hedrick missed out with a 96.

Hot Springs head coach Josh Smith said Miller left a lot of shots out on the course but noted he was still proud of him for finding a way to qualify for state.

"Warren didn't have his best day and missed out on qualifying unfortunately but he's worked his tail off for me for the last four years," Smith said. "He's improved so much since he was a ninth grader. Just hate for it to end for him. ... Cade didn't have his best day. He expected himself to probably play better, but he did just enough to get in."

Hot Springs only put one girls golfer on the course Wednesday in Melanie Holmes.

Holmes attends the Arkansas School for Mathematics, Sciences and the Arts and is originally from Atkins. She qualified for the state tournament as an individual with a score of 104, meaning even more for her because she will get to play in a state tournament close to home in Russellville.

"Really proud of Melanie," Smith said. "Shot her lowest round of the season for this year with limited practice and her getting to play some matches and really struggling to get to practices. To shoot a 104 to get in and qualify as an individual is big for her because it's back close to home."

The temperatures on the course stayed in the high 90s most of the day and made for a grueling round of golf.

"When you've got a score to shoot it tightens them up a little bit sometimes," Higginbotham said. "The heat had a lot to do with fatigue and mental fatigue at the end, too."