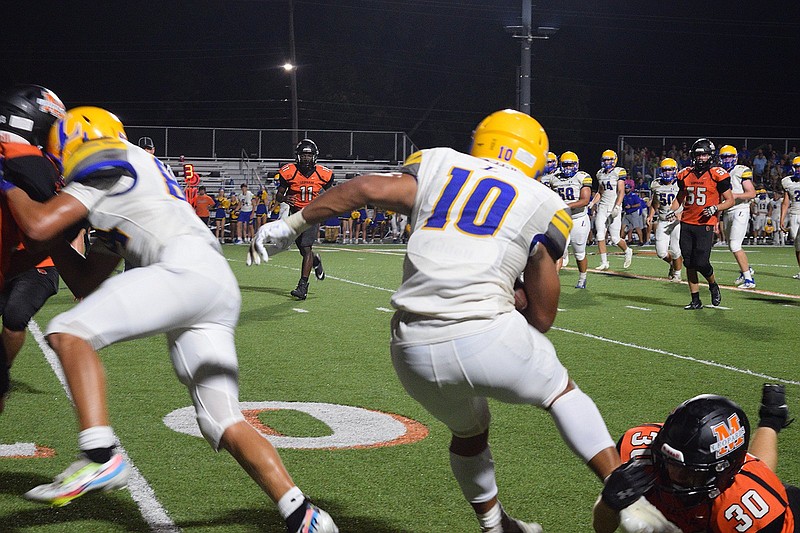 Since the second game of their season, the Lakeside Rams have been traveling.

Lakeside opened the season at home to Lake Hamilton then traveled to Russellville for a game that was eventually canceled because of storms. Then the Rams traveled down the road to Malvern and returned home with a 48-28 loss.

The Rams are on the road again Friday as Lakeside travels to Camden-Fairview (2-1, 0-0 5A South) to face a very strong Cardinals team who beat El Dorado 39-21 and Dollarway 48-0.

"The schedules are different for us for sure," Lakeside head coach Jared McBride said. "We just embrace the opportunity to get to play. Camden is our first conference opponent and got to go on the road to play them. It is always a tough place to win."

"We were able to practice some more fundamentally and try to get ready for this long run of conference that is coming up," McBride said. "We are still trying to find the right pieces and gain some experience still. We have young guys for sure, and we are missing some game time with missing that Russellville game. I was proud of our kids for playing hard and playing until the end. Malvern is a good team."

Camden Fairview senior quarterback Martavius Thomas signed to play for the Arkansas Razorbacks in baseball as an outfielder and shortstop. He is looking into possibly being a multi-sport athlete for the hogs.

"They have a division one athlete at quarterback," McBride said. "Lots of skill to go around with him. They are big and physical up front offensively and returning a lot of their defensive players from last year."

"They have," McBride said, "five or six deep threats in their receiving core."

"We must do better at what our fundamentals are," McBride said, "and we must be able to sustain some blocks longer and give our running backs a chance to break loose in the running game."

McBride highlighted the keys to winning Friday as not turning the ball over and not giving the Cardinals more opportunities to put points on the board.

"If we can take care of the football," he said, "and create some turnovers to get a few more chances, I think that will help us have a chance to compete."

Senior captain Diego Robledo leads the defense for the Rams and will have to have a huge game to keep up with the Cardinals.

"We have got to be able to tackle in space," McBride said. "They are good at spreading you out and making you have to make plays. They have a really good electric quarterback that can run and pass that will be key for us."

Camden Fairview sophomore running back Kenneth Lanford averages 52 yards on the ground per game and can also catch the ball out of the backfield.

McBride said his offensive and defensive lines stepped up in the extra week of practice and got better.

"We are as healthy as can be right now," McBride said. "We just have to tackle in space is a key for us defensively."

Senior Christian Bell is averaging 12 tackles per game for the Rams with 18 tackles in the Malvern game.

"We leaned heavily on Wolf offensively and Robledo is the leader of our group on defense," McBride said. "They have both had good weeks and we are getting excited about getting to see them play again.

The Rams will need to spread the ball round to their weapons to overtake the Cardinals Friday in Camden.