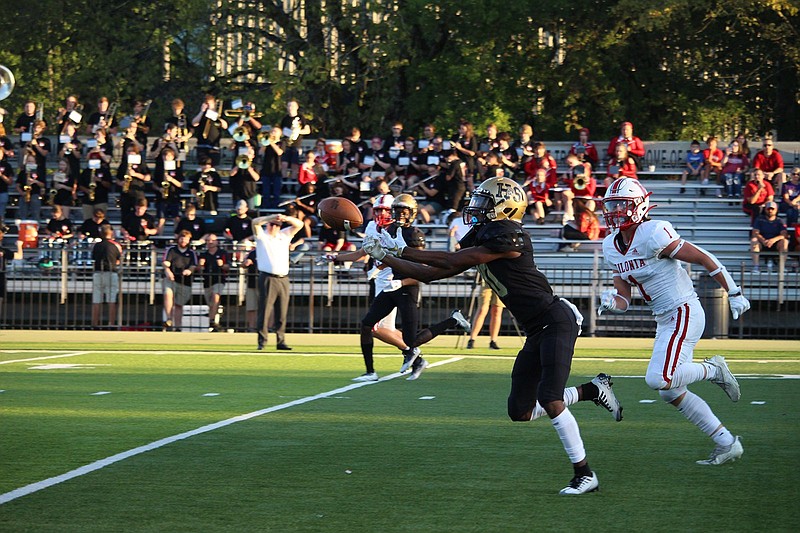 Hot Springs' rigorous schedule continues tonight when the Trojans open conference play against a Parkview team with eyes on a state championship.

The Patriots (1-2) dropped down to Class 5A this year after making a run to the 6A semifinals before losing to Greenwood last season. Already a stout team, Parkview prepared for conference play against three Class 7A programs.

"They've got a cockiness about themselves, which you know you want as a coach," Hot Springs head coach Darrelll Burnett said about Parkview. "You want to see that in your players. I think they've got good confidence coming in. The way you flip their losses is they've been going against some tough 7A opponents."

"They didn't lose to anybody that wasn't worthy," Burnett said. "They played them both tight so we got our hands cut out for us. It'll be a great opener to conference."

Burnett said while Parkview's skill players are highlighted all the time, the Patriots' offensive and defensive lines are what separates them from other teams.

Burnett added that the Parkview defensive ends get the Patriot defense going before the rest of the team flies around to the ball.

"Then they've got that pretty safety back there that's got all the offers," Burnett said. "He lines up at corner, safety and receiver. Then he has another guy beside him, No. 7 (Willie Eackles), that's real good. They protect the middle then they've got those dudes on the outside which is good. They're loaded from top to bottom."

It will be Hot Springs quarterback Matthew Contreras' job to pick Robinson and the Parkview secondary apart tonight.

The junior's eight touchdown passes tied him for 4th all time for touchdown passes in a single game. Hot Springs wide receiver Octavious Rhodes tied the state record with five touchdown receptions against the Gryphons.

"It was big on those guys," Burnett said. "A lot of people don't think 7-on-7 is important but same thing they did out there on Friday, they showed it in 7-on-7s. They showed it in team camps. We just have to keep it going against a tough opponent."

Contreras is 48-of-88 passing on the season for 883 yards and 13 touchdowns. After an impressive start to the season, he will be key if the Trojans want to beat Parkview.

"He's big, he's big," Burnett said. "He's just got to relax, play his game and play with confidence. That's one thing about him, he doesn't care who he goes against. ... You know he's a baseball guy, too. You've got to have a different mental approach when you're playing baseball. You're going to fail some. He shakes it off.

Contreras shared the ball well among his receivers throughout the Trojans' first three games. Rhodes has 18 receptions to his name, and Derrick Hicks has 12 on the season. TJ Brogdon and James Wisner both have eight catches.

"They're big time," Burnett said. "Those guys will all be playing at the next level at the receiver position. If not, TJ being a multi guy, he can switch to corner. The future's bright for them and us. We're glad to have them."

The Trojans had one less day of preparation than normal for tonight's game because of the Thursday night kickoff.

However, since the Parkview offense is not out of the ordinary like a Lake Hamilton offense might be, Burnett said the short week did not affect preparation too much.