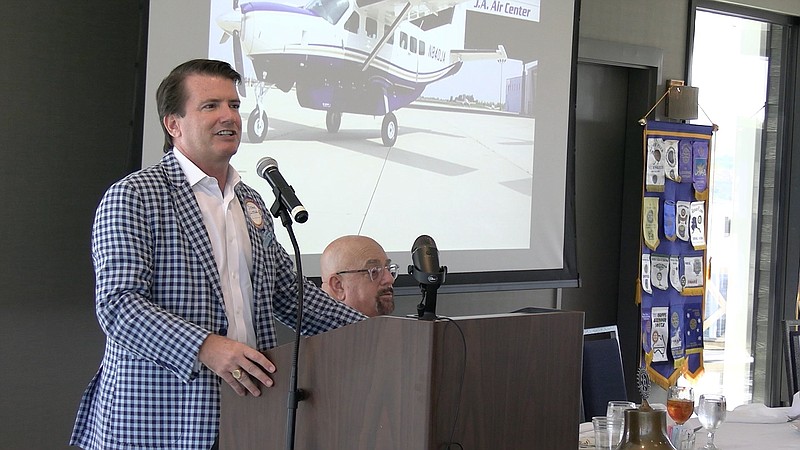 "Everybody dressed up to get on the airplane," Stan Little said of Pan Am flights, circa 1965, at Wednesday's meeting of Hot Springs National Park Rotary Club at the DoubleTree by Hilton Hot Springs.

"Everybody behaved when they got on the airplane, and the airline treated you very well."

Southern Airways' fleet of Cessna 208 Grand Caravans aren't the hulking jumbo jets Pan Am plied across the stratosphere in its heyday. The nine-seat turboprops plod along by comparison, cruising at about 200 mph through lower, more unstable levels of the atmosphere.

"You can't bring in a Gulf Stream V and say we're going to fly people back and forth to Destin and just hope they don't mind the $3,000 seat fare," he said. "You have to make it affordable. This is part of the reason why you can buy a $49 ticket to Dallas, but if you go up to Memphis or Little Rock and you want a ticket to Dallas it's $149 and sometimes $249."

The aircraft is incidental to the customer experience, according to feedback from the focus group Little convened after starting the airline in 2013. Having to arrive at the airport two hours before their flight, self check-ins, slow drink service and bag fees were among their complaints.

Training programs for pilots, ground crew and ticket agents channeled the customer service of the past.

"All the way down the line we tried to make this a retro-looking airline from a customer service standpoint," Little said. "We're dedicated as an airline to be the people you want to deal with."

No detail was overlooked, down to kitting out pilots in Pan Am's signature white hats. No matter if they were no longer in production, the airline wouldn't take wing without them.

The hats materialized after a call to a Hollywood costume designer. He had boxes of them left over from "Pan Am," the network dramatization that was canceled after 14 episodes.

"I told our pilots you're not in uniform," Little said. "You're in costume, because they came straight from Hollywood. That was the dedication that we had at the time to grabbing a theme and holding on to it for dear life."

The three Essential Air Service cities the airline serves in Arkansas weren't happy when the U.S. Department of Transportation selected Southern Airways as their federally-subsidized carrier in late 2016. An airport official said he was "shocked" at the announcement, given that Southern Airways was not his or the city's first choice.

Starting in March 2017, the airline was given a two-year contract that paid a $2,378,312 annual subsidy for 18 weekly nonstop round trip flights between Hot Springs and Dallas.

"I kinda understand I'm at the party without an invitation, but I want to make the commitment to you guys," Little, recalling conversations he had with airport directors, said. "Give us a chance, and in two years I'm going to get your endorsement unanimously."

The Hot Springs Board of Directors asked DOT to renew the airline's contract in 2019 and 2021. The current contract that runs through February pays an annual subsidy of $2,787,262 and includes service to Memphis, according to a DOT subsidy report. Little said Southern Airways will apply to continue as Hot Springs' EAS provider.

Little said what started as a sideline to his law practice when the Delta-Northwest merger ended the Memphis to Destin, Fla., route has grown into the largest commuter airline in the country. Acquisitions by Southern Airways' parent company expanded its footprint to both sides of the international date line.

He said the commercial air travel day starts and ends with Southern Airways, dawning with its Northern Mariana Islands service from Saipan to Guam and setting with the Molokai to Honolulu, Hawaii, route.

"We wake up the American flight day and put it to bed every single day," Little said. "That's not something a country lawyer from Mississippi ever thought he'd be saying to a group of people at the Rotary Club."