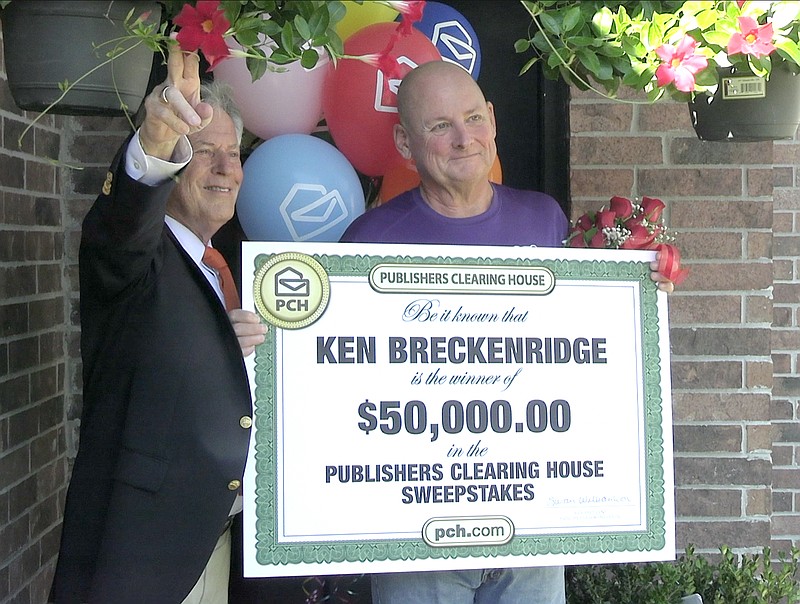 A Hot Springs resident got a pleasant, and lucrative, surprise Wednesday morning when he received a $50,000 check from Publishers Clearing House.

Ken Breckenridge, 63, was just about to head out for work when a member of the Publishers Clearing House Prize Patrol surprised him at the door with a massive check, balloons, roses and Champagne.

Breckenridge said he plans on using the prize money to pay bills and invest for his son, though he added he may do something fun with a portion of it.

Breckenridge, like many others, plays the games that can be found online at the Publishers Clearing House website, pch.com, where one can enter the sweepstakes for prizes ranging from nominal amounts of money to multiple millions of dollars.

"I've been playing about two and a half years and I've got almost 2 million tokens. It's just something I enjoy doing and passing the time ... I play the whole series every day," he said.

The PCH Prize Patrol delivers prizes every week all across the country.

"I'm out at least two or three times a month giving away prizes," Dave Sayer, executive director of the Publishers Clearing House Prize Patrol, who delivered the $50,000 check, said.

"I've been with Publishers Clearing House now for 41 years and I've given away 550 big prizes, I'd say. It's always a thrill, even hundreds of prizes later," Sayer said, "We're going to be on the road three times this week. We're on the road at least once a week, giving away big prizes. Anything $10,000 and up, we usually deliver in person."

The company says it has awarded over half a billion dollars in prizes. The Prize Patrol surprises winners on their doorsteps with oversized checks in amounts anywhere from $10,000 to "Forever" prizes worth many millions. Prizes are funded by company revenues and no purchase is necessary to enter or win. Winners are selected randomly and without bias.

The practice of notifying sweepstakes winners in person rather than by phone began in 1989, when the Prize Patrol was created.

Publishers Clearing House warns consumers to beware of imitators and scammers, asserting that its social media pages are verified, winners are not contacted through private messages, and one does not have to pay to claim a prize.