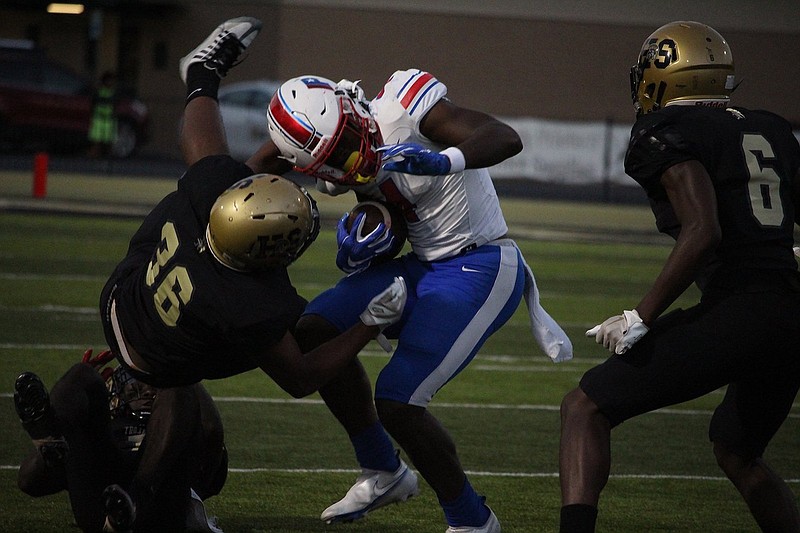 Hot Springs came out hot to start the game, but heavy pressure from Little Rock Parkview's defense got the better of the Trojans as the Patriots took a 33-21 win at Tommy J. Holt Memorial Field at Joe C. Reese Stadium Thursday night.

The Fearless Friday game of the week pitted the top-ranked Patriots (2-2, 1-0 5A-South) against a much-improved Trojans team (2-2, 0-1), but despite quarterback Matt Contreras and receiver Octavious Rhodes landing in the state record book after last week's performance, they were unable to have a repeat performance.

"They played some tight coverage," said Hot Springs head coach Darrell Burnett. "They're good. They're real good. We played a good team, man. A good strong team that was able to run the ball and kill some clock. You live, you learn."

The coverage kept Rhodes, the Trojans' top receiver who tied the state record in touchdown receptions last week, from making some key catches, including three deep bombs that would have likely resulted in touchdowns.

Patriots head coach Brad Bolding said his team came out flat, partially due to the team looking past the Trojans.

"I give a lot of credit to Hot Springs," he said. "Those guys came out ready to play. Their kids were firing on all cylinders the first half, and we just kind of came out here and just thought the game was just gonna happen and we were gonna walk out here with a victory.

"This is a good football team we played."

After a misstep on their first play from scrimmage, Contreras, whose eight touchdown passes last week against Little Rock Southwest landed him in a tie for fourth in the state record book, connected with Rhodes for a 69-yard pass on the second play. Juan Martinez' kick made it 7-0 with just 29 seconds off the clock.

Both teams struggled to score on their next several drives, the Patriots managing to tie the game on a 27-yard run from Cameron Settles followed by Willie Eackles' kick with 10:54 remaining. Hot Springs took the lead into the break after Contreras connected with Derrick Hicks on an 11-yard pass with 34 seconds remaining before the break for the 14-7 lead.

"We made some adjustments I thought at half, some adjustments that really helped us the second half," Bolding said. "I'm really proud of the kids. The kids, they came out. They realized, man, we can't come out against good football teams and not play four quarters. So that's a good valuable lesson learned from it."

Bolding's adjustments were enough to let the visiting team go on a 20-point scoring spree to start the second half and take a 27-14 lead with 11:56 left in the game.

Contreras connected with Hicks again with six minutes left to cut the spread to a one-touchdown game, but Parkview quarterback Eric McGehee connected with Monterrio Elston on a 28-yard pass to cap a nine-play, 65-yard drive that burned 4:14 off the clock to put the game out of reach with 1:46 left.

Contreras went 19-for-42 passing for 206 yards with two interceptions and three touchdowns. Rhodes had four catches for 81 yards and a score, TJ Brogdon had nine catches for 54 yards, and Hicks had four snags for 43 yards and two touchdowns.

Perry Jones led the Trojans on the ground with 13 carries for 63 yards, and Zamarion Wilson had six rushes for 49 yards.

McGehee was 14-for-20 passing for 215 yards and two scores. Elston had 176 yards receiving with two scores, including a 77-yard reception to give the Patriots their first lead.

"He's a freak," Bolding said of Elston. "He's just an unbelievable player, and he's a sophomore, too. That's even better for us because we'll have him the next two years, but he just does so many things with the ball out in the open field. I mean, he's just elusive, and he can run, and he's strong."

Settles had 86 yards rushing on 19 carries with one score, Darien Bennett had 21 rushes for 61 yards and a touchdown, and McGehee picked up six yards on four attempts with a score.