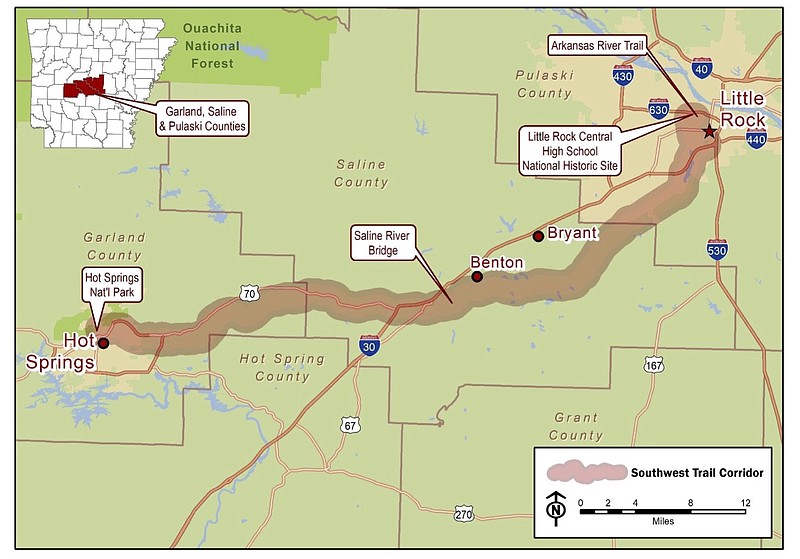 The city has acquired part of the right of way for its leg of the 60-mile pedestrian and bicycle corridor connecting downtown Hot Springs to the Arkansas River in Little Rock.

The Hot Springs Board of Directors adopted a resolution Tuesday accepting Spa Construction Co.'s donation of 6 acres for the Southwest Trail. The gift will provide right of way along Spring Street, taking the trail from Vernel Street to Mill Creek Road. It will also be the location of the Gulpha Creek crossing. Much of the donated land is in the creek's flood plain, according to the city's GIS map.

"It's a big chunk of what we need for the Southwest Trail," Assistant City Engineer Mike Hill told the board. "It has a dam and a waterfall. Once we get it cleared out, it will be something really nice. There will be a bridge crossing there, and you'll be able to see that water coming over the dam when you cross the trail."

After crossing the creek, the trail will veer west, going south of Spring and crossing Illinois and Cypress streets and East Grand Avenue, according to the most recent alignment. It will follow Convention Boulevard before turning north at Malvern Avenue and ending at Hill Wheatley Plaza.

"It will be a major cycling attraction," Mayor Pat McCabe told the board. "It will be a wonderful addition to central Arkansas and all the way down here to Hot Springs. That's an awesome contribution to the city."

Garland County was awarded a $1 million federal grant earlier this year to build part of its portion of the trail. The grant and the county's $250,000 match will build 1.15 miles from the eastern city limits of Hot Springs to Westinghouse Drive, West Central Arkansas Planning and Development District said.

The Garland County Quorum Court appropriated the county match from the county's Coronavirus Aid, Relief and Economic Security Act funding earlier this month. The $394,606 included $144,606 for right of way acquisition. Pulaski and Saline counties, and incorporated areas the trail will cross in the two counties, are responsible for building their legs of the trail.

The consent agenda the board adopted included the following items:

• A resolution expressing the city's willingness to use federal aid to add a turn signal for eastbound Malvern Avenue traffic turning left onto the King Expressway.

The city pledged to maintain the traffic signal and cover installation costs exceeding the $1,125,000 in available funding. Federal funding will pay for 80% of the project, with state and local money paying the balance. Hill told the board the city would be responsible for 10% of the $380,000 estimated cost.

"They're assuming everything needs to be replaced," Hill, referring to the Arkansas Department of Transportation, said. "In reality, many of those elements of the intersection will not be replaced."

• A resolution awarding Goslee Construction Co. a term contract for concrete work. According to information presented to the board, Goslee submitted the low bid of the two the city received.

Hill told the board Goslee will focus on sidewalk repairs.

"We're also looking to make connections where we have pieces missing," he said, adding that the city has received numerous requests for sidewalk improvements from people who use wheelchairs. "They've asked could we have some better sidewalks."

The money will come from funding the city receives from the 0.50% state sales tax voters made permanent in the 2020 general election. The city said the sales tax fund budget included $439,202 for curb and sidewalk repair.

• A resolution awarding a $239,700 bid to Coakley Co. for three drainage improvement projects. According to information provided to the board, Coakley was the low bidder on two of the three projects.

Public Works Director Ron Sievwright told the board Coakley will replace a box culvert's wooden wing walls with concrete rails. The culvert is off of Skyway Street and near a creek that empties into the Spencer Bay arm of Lake Catherine.

"A section of galvanized pipe has deteriorated and is causing sink holes," Sievwright told the board. "We'll replace that and construct a junction box there for cleanouts."

The money will come from the stormwater fund's drainage improvements line item.