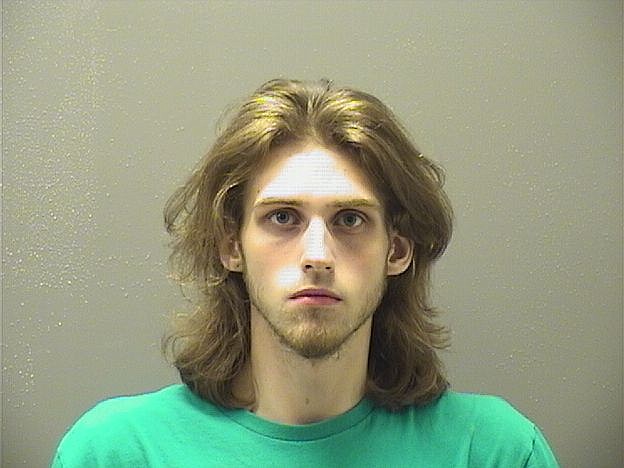 MOUNTAIN PINE -- A Hot Springs man was arrested in Mountain Pine Wednesday after allegedly threatening his girlfriend and their 1-day-old child at gunpoint, later telling Mountain Pine police he was "fiendin' a meth high."

Miles Douglas Wright, 21, who lists a Guinn Lane address, was taken into custody shortly before 5:30 p.m. and charged with felony counts of first-degree terroristic threatening, first-degree endangering the welfare of a minor and possession of drug paraphernalia, each punishable by up to six years in prison, and a misdemeanor count of possession of drug paraphernalia, punishable by up to one year in jail.

Wright remained in custody Thursday in lieu of an $8,500 bond and is set to appear today in Garland County District Court. According to court records, Wright has no prior felony history, but a former girlfriend had obtained an order of protection against him on June 23, 2020, which was dismissed two days later at her request.

According to probable cause affidavits, around 4:15 p.m., Mountain Pine police were dispatched to the area of Sixth and Main avenues after a woman called to report her daughter and her daughter's infant had been threatened by the daughter's boyfriend with a firearm.

The victim and her boyfriend had reportedly just returned from UAMS in Little Rock with their child who had been born Tuesday. The boyfriend, later identified as Wright, had just left the scene in a black truck.

MPPD Chief Joshua Jester alerted dispatchers that he had just seen a black truck "driving in a suspicious manner" toward Blakely Dam Road and was heading in that direction when he saw Sgt. Jeffery Island driving toward Sixth and Main.

Jester got a call from a citizen with a police scanner in their car who stated he had seen the truck, a black Dodge Ram with tires in the bed, "in town," so Jester headed back toward town to try to find the victim and infant "to ensure their safety."

Jester got to Sixth and Main and couldn't find anyone at the scene and was told the caller did not give a specific address and would not stay on the phone long enough to get one. Jester got the number and called the victim's mother who told him the victim had gone to Mountain Pine School "to better hide from the boyfriend."

Jester went to the school and was talking to the victim's father when he saw the black truck again headed toward the dam on Blakely Dam Road. He got behind it and "quickly pulled it over."

Jester and MPPD Detective Sgt. Ruey Hendrix conducted a felony traffic stop and ordered Wright out of the truck and onto the ground with both their guns drawn. Wright was handcuffed and taken into custody without incident and Jester noted he was "fully compliant and respectful" during the whole process.

In searching Wright, Jester found "a large butane torch lighter" in his possession. Wright gave the officers consent to search his truck and when asked about a firearm reportedly said, "If there is a firearm, it will be under the back seat."

Jester did not locate a firearm under the seat, but found a black box that contained a pill bottle with 0.5 grams of marijuana, a metal pill holder with white powder residue and a set of digital scales. After being read his rights, Wright was asked about the powder which he reportedly stated was meth.

Wright allegedly made a spontaneous statement to the officers that he had been at the hospital for three days and was "fiendin' a meth high." He also reportedly stated that he "hated that" and "hoped he may receive court-ordered assistance for his drug use and anger issues."

When asked about the gun, Wright allegedly admitted he did threaten his girlfriend with a shotgun at his house, but he "did not mean it." He told them he lived on Guinn Lane in Hot Springs and also reportedly confirmed his child was present when he threatened his girlfriend with the shotgun, but he insisted "I would never hurt my child."

Jester then transported Wright to the Garland County Detention Center. The affidavit did not indicate if the officers were able to locate the shotgun allegedly used in the incident.