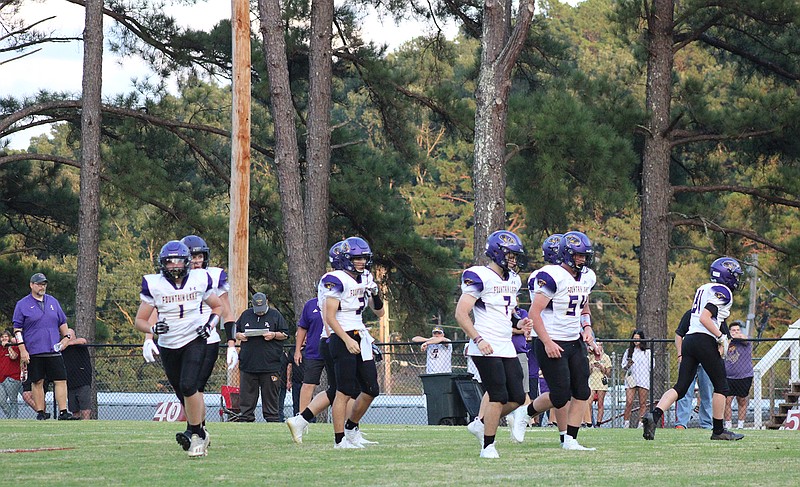 Fountain Lake lines up for a play against Mountain Pine Sept. 2 at Stanley May Field. - Photo by Lance Porter of The Sentinel-Record

Fountain Lake is no stranger to injuries.

The Cobras (2-1) made the switch to 8-man football this season because injuries plagued the team last year, and head coach Kenny Shelton was not sure if his program would be able to make it through a season of 11-man play.

Even with the switch, the injury bug has hit Fountain Lake again ahead of the Cobras' game against Marshall (1-3) tonight.

"Some of the issues we're having right now are injuries," Shelton said. "I have three guys that are out this week, and I've got a couple of others that are definitely banged up that will probably only be playing one side of the ball. ... We're trying to maneuver through those injuries like we've had to the last several years."

The injuries forced Fountain Lake to practice without pads this week.

"One thing I didn't like this was we didn't go in pads," Shelton said. "We just went in helmets and blocked dummies. Just trying to prevent any other injuries and trying to get a little bit healthier this week. Hopefully we won't have to repeat that next week. That makes me a little nervous having a week off from actually having contact."

Shelton said although the team is playing 8-man football, the injuries are still difficult to handle. However, upperclassmen on the squad dealt with injuries plenty of times over the last few seasons, so the Cobras hold experience in the matter.

"We don't have that big of a roster to begin with so we have some guys that are having to play some different positions that they're not totally accustomed to playing," Shelton said. "At the same time some of our older guys the last few years with some of our injuries have had to kind of play musical chairs and have gotten used to playing different spots."

Looking at Marshall, the numbers show that the Bobcats are going to try to establish the run. Fountain Lake charted the amount of times Marshall runs the ball, and the tally came out to 85% of the time.

"Just really curious to see if they're going to get their starting halfback back from injury," Shelton said. "He's not played the last couple of weeks, and he's definitely a difference maker for them. That's something that we'll have to wait and see. Maybe in pregame get a little sneak peek over there and see if he's in street clothes or dressed out."

The Cobras are prepared for the Marshall ground game either way.

"Our offensive play was the best it's been all season," Shelton said. "Our lowest grade on the offensive line was an 85%. We definitely picked it up with our blocking scheme much better. We didn't give up any sacks. Abe (Rose) had plenty of time to throw the ball. The guys did a really job opening up holes for Abram (Davis)."

Davis finished the game with 123 yards and two scores on seven carries.

Since the introduction of Abe Rose to the quarterback position, Fountain Lake's offensive attack has become more balanced. The Cobras can hurt teams both on the ground and through the air.

Rose went 7-for-11 passing against Cedar Ridge for 51 yards and a touchdown. A dual threat, Rose also rushed for 76 yards and three scores.

Shelton isn't sure yet just how Fountain Lake will attack Marshall, but with an offense that can hurt teams in multiple ways and with Rose at quarterback, the Cobras have a good chance of finding offensive success against the Bobcats.

"He's definitely transformed himself into being a leader on the field," Shelton said. "Definitely is one of the most coachable kids we've had in a long time. He's able to do what we ask him to do and make little changes. He's a student of the game and really excited about the season that he's having."

Coming off a big 48-8 win over Atkins on the road after a serious car wreck affected the Jessieville football team and community, the Lions host Bismarck tonight to kick off the conference season.

Jessieville (1-2) just edged Bismarck (1-2) 51-42 last year and both teams will be looking to get a rivalry win to jump start league play.

After graduating standouts Carson Hair and Matthew Huff, Jessieville started the season with a 45-30 loss to Mineral Springs and a 35-0 defeat to Mount Ida before bouncing back over Atkins.

Bismarck started the season similarly, losing to Prescott 47-28 and Rison 34-31 before beating Poyen 45-0.