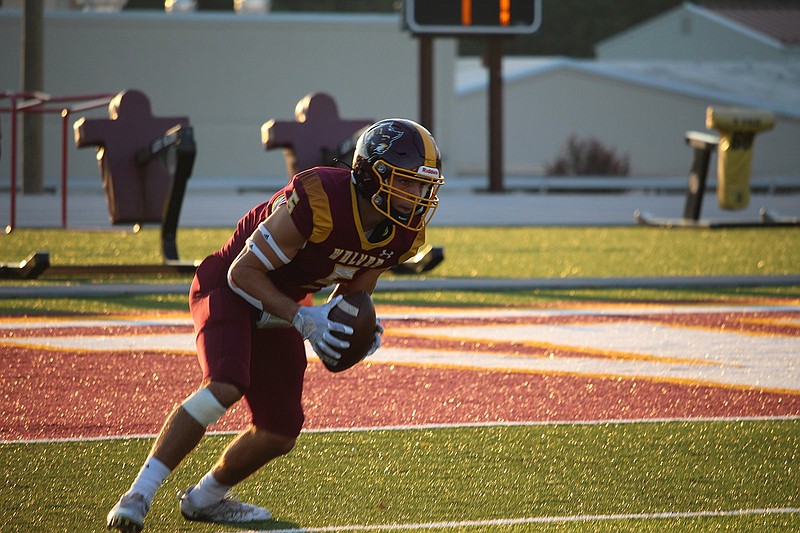 After a long road trip to Mountain Home, Lake Hamilton returned home with a 28-19 dog-fight win over the Bombers.

The Wolves are glad to be home to take on the Siloam Springs Panthers tonight.

"The energy was not where it needed to be," Lake Hamilton head coach Tommy Gilleran said. "The four-and-a-half-hour bus trip probably did not help and then having so much energy the week before I think we brought a lot of energy to the Little Rock Christian game and because of that we were a little flat."

Siloam Springs (0-4, 0-2 6A West) has really struggled on offense so far this season.

Gilleran highlighted that the Panthers had a couple of turnovers against Greenwood, and Lake Hamilton's defense hopes to have the same effect.

Siloam Springs' sophomore quarterback Jackson Still might be young but has great footwork as he had the Panthers' only score last week on a 56-yard rush against a very strong Greenwood team.

"Their quarterback is a good runner and we will have to stop that," Gilelran said. "He is a decent passer, but if we can stop him running the ball and make them throw, I think they will be in trouble."

On the flip side, Lake Hamilton (4-0, 2-0 6A West) has been perfect in the win column, taking down teams such as Little Rock Christian and becoming the No. 8 team in the state for all classifications and No. 3 in 6A.

Lake Hamilton leaned on its very strong rushing attack against Mountain Home. The Wolves racked up 334 rushing yards and were sparked by the return of senior Kendrick Martin.

"The big thing is we overcame all the obstacles with penalties and just different things that went on through the game," Gilleran said. "The kids handled being under pressure and we fought all the way to the end of course and came out with the win."

Senior center Brayden Aitken is a two-year starter and the leader of the offensive line. Before a game some athletes are pumped and some are reserved.

"I am just sitting there, more reserved energy," Aitken said. "I definitely lead the line."

"Coach has done a lot for me," Aitken said. "I played a little bit sophomore year, too. He has made sure I always stepped up."

Siloam Springs might be coached well, but the Panthers just do not have the speed.

"Siloam Springs is always in position," Gilleran said. "They just do not have the big home run hitters like some teams have. They really must be perfect on offense and defense because of the lack of speed they have. They are going to have to take care of the ball and do things right to score."

The Wolves' defense is led by three seniors Justin Crutchmer, Izic Clenney and Luke Atkinson. All three players are averaging 10 tackles per game as linebackers.

"I think our defense is starting to come together," Gilleran said. "They are starting to figure out this new defense and really make it better for this team and this unit."

Lake Hamilton senior middle linebacker Jamarrion Byrd has hopes to play football for the University of Central Arkansas either as a walk on or scholarship athlete.

"I bring a lot of energy," Byrd said. "During the game I am usually the one screaming that it is time to get hype.

"I like to listen to music and talk to my teammates and we bounce off each other's energy. I enjoy that."

Byrd is a two-year starter for the Wolves.

"I was not the best kid when I came to play football," Byrd said. "Coach really showed me what I was doing was not right and he helped me a lot."

"They are always big and physical," Gilleran said. "Their coach does a really good job of coaching the kids."

Crutchmer is averaging 97 rushing yards and 36 receiving yards per game through the first four games with eight total touchdowns.

"Junior quarterback Easton Hurley, he looked good," Gilleran said. "He had a 48-yard run. That is a big deal for him because he is not a burner, but he made a couple people miss and he scored a touchdown."

Panthers junior running back Alex Derwin averages 69 yards on the ground and four tackles per game.

"For us we are going to have to stay on our blocks and not turn the ball over," Gilleran said. "If we take care of those things we will have a chance to beat them."

The Siloam Springs defense has struggled so far this season, giving up an average of 40.5 points per contest.

Gilleran highlighted the lack of speed on Siloam Springs' defense and favored the Wolves' offensive line against the Panthers defensive line in the matchup.

"Practices have gone better this week," Gilleran said. "The energy is better even though it is the hottest week we have had in a long time for practice. I was really pleased with the last two days and hopefully today we will clean it all up."

The Wolves will have to go without their tight end Cooper Kindt. He is out for multiple weeks possibly. Dalton Pitts, David Felan and Nick "Gronk" Herron will fill the tight end role.

Kickoff from Wolf Stadium is set for 7 p.m.