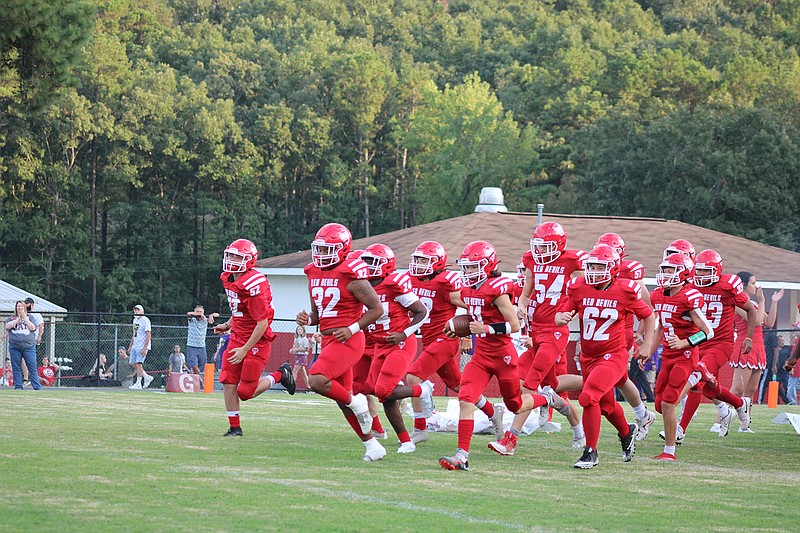 Mountain Pine runs across Stanley May Field ahead of a game against Fountain Lake Sept. 2. - Photo by Lance Porter of The Sentinel-Record

The Red Devils (3-0) host Marvell-Elaine (1-1) to kick off the conference season, but Mountain Pine head coach Daryl Scott dealt with one major problem this week in preparing for the game.

Scott watched film of the Mustangs from last season to get somewhat of an idea of what they may look like tonight.

"They're very athletic, very quick," he said. "They like to put a lot of people on defense at the line of scrimmage and shoot gaps to try to get you off your game a little bit. That's kind of a challenge for us. That's going to be new for us this year because people haven't done that to us. We worked on it in practice, learned to pick up blocks and stuff like that."

With no film, Scott isn't quite sure what the Marvell-Elaine will look like on offense.

"I'm really not sure because we haven't seen them," he said. "But I did see where they put 50 points against (Augusta). They did score 50 so they can score on offense so we have to be ready on defense."

The Red Devils' offense came to life in a 68-30 win over Parkers Chapel last week, and the first string offense did not see the field in the second half after putting up 60 points in the first two quarters.

Scott was disappointed in his team's performance during a 38-16 win over Rector but was much happier with how his team looked against Parkers Chapel. The Red Devils registered over 600 yards of offense and over 500 by halftime against the Trojans.

The Mountain Pine head coach expressed concern about his offensive line heading into the season. However, the O-line erased those fears, and Scott said his big men up front keep getting better.

"We're not getting a ton of holding calls that I was worried about," Scott said. "The penalty thing was a big concern of mine. Just from watching film of them last year, especially the state championship game. They had 14 penalties. I was like, 'Guys, we've got to cut that out.' They've done a really good job this year."

All-State running backs Keelan Dobbins and Isaiah Miles looked the part through the Red Devils' first three games. With the Mustangs bringing speed to Stanley May Field tonight, the duo will be put to the test.

Dobbins and Miles are not the only two players that have impressed this year. Dayjon Matlock tallied 10 tackles and five sacks in just one half against Parkers Chapel.

"He did an outstanding job on defense for us," Scott said. "He's going to have to have a big game too of stopping those little quick running backs."

Scott took over Mountain Pine after the departure of successful head coach Sam Counce. Aside from being in charge of a new team, Scott also had to learn the 8-man game and continues to learn about the style of play on a weekly basis.

"It's really a defensive problem," Scott said. "8-man football is because it's an offensive game. You have to account for every single player that is eligible. If you don't know your assignment defensively there's going to be a good chance you get beat. The guys are understanding their assignments and I'm starting to feel a lot better about our defense because I was very, very concerned about a mistake and it's a touchdown. But the guys are doing a great job."

After putting up 60 points in a half but allowing 30 in the game, Scott was more impressed with his coordinator's job than his own.

"Coach Alderman is doing a fantastic job with offense," Scott said. "He's doing a wonderful job. I've just got to pick up the defense a little bit because we gave up 30."