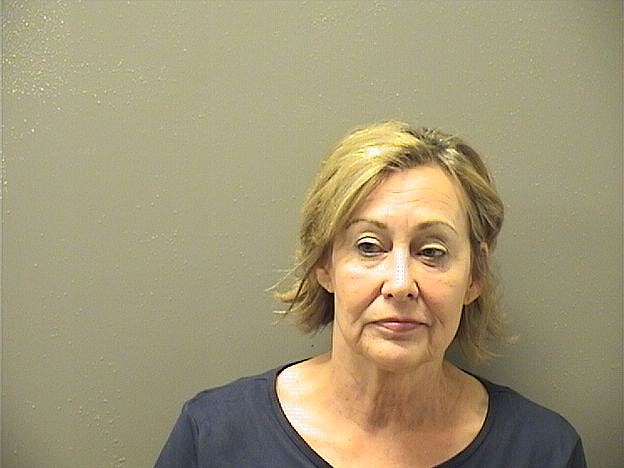 A Hot Springs woman was arrested on a felony mischief warrant Wednesday stemming from allegations she vandalized another woman's SUV outside City Hall in May, causing over $6,700 in damages.

Laurie D. Robinson, 59, of 113 Lakepoint Cove, was taken into custody shortly before 4 p.m. at her residence and charged with first-degree criminal mischief over $5,000, punishable by up to 10 years in prison.

Robinson, who lists no prior criminal history, was released a short time later on a $3,500 bond and is set to appear on Oct. 6 in Garland County District Court.

According to the probable cause affidavit, on May 16, a woman filed a complaint at the Hot Springs Police Department alleging that she had been at City Hall, 133 Convention Blvd., the day before and sometime between 4 and 5:30 p.m., someone had used a sharp tool to "scrape down both sides" of her black 2017 Infiniti QX80 SUV.

Officers noted the marks looked as if the perpetrator "keyed" the victim's vehicle, causing "deep scratches." The affidavit notes the total appraisal for repairs to the vehicle was $6,791.67.

On May 23, Detective Luke Russell reviewed security video footage of the incident which showed a white female wearing a blue shirt exit what appeared to be a 2010 model tan Chevrolet Suburban and walk down both sides of the victim's SUV with an item in her hand, "scraping it against the vehicle."

The suspect in the vehicle was reportedly identified as Robinson, who was well known to the victim and her boyfriend. The affidavit notes Robinson is allegedly the ex-girlfriend of the victim's boyfriend.

Russell checked the vehicle registry for Robinson which showed she owns a silver 2009 Chevrolet Suburban which is "the same generation Suburban in the video." A warrant for Robinson's arrest was issued on July 26.