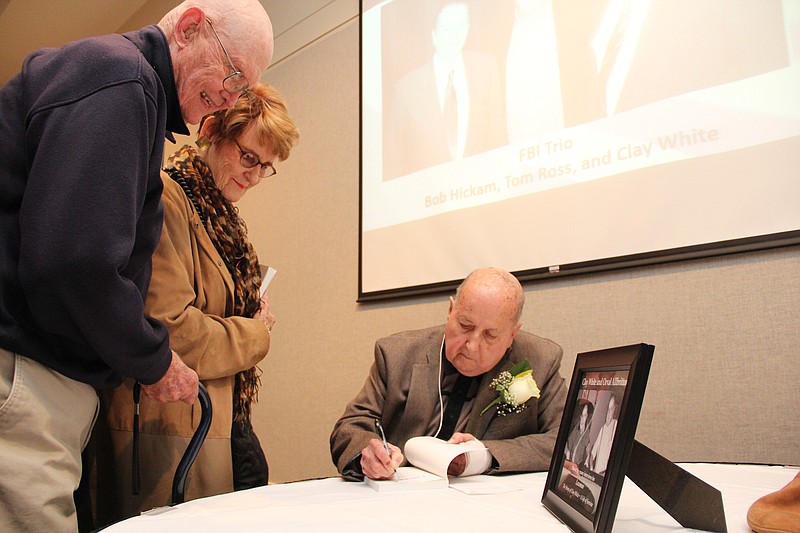 Bill and Drew Terry have copies of Law Man signed by author Orval Allbritton during a Nov. 18, 2014, book signing at the Hot Springs Convention Center put on by the Garland County Historical Society. - The Sentinel-Record/File photo

From his life as an FBI agent to authoring multiple books about the history of Hot Springs, Orval Allbritton could have volumes written about him.

Allbritton, who died Jan. 8 at 94, may have created more interest in the history of the Spa City than anyone, having written five books, numerous articles in newspapers and other publications, and contributing to many other authors' works as well as the Gangster Museum of America.

"One of the reasons Orval's life is so significant is because through his work he created so much awareness of Hot Springs history and so much interest in it and so much excitement about it," Liz Robbins, executive director of the Garland County Historical Society, said.

"I don't know if so many other works would have been written, if other people wouldn't have been getting involved in the history if they hadn't been exposed to Orval's books. One can't overstate how important his work was in creating the interest in history of Hot Springs that we see today," she said.

Growing up in the Spa City, Allbritton was interested in history from an early age.

"The best I know, he just always loved history," Becky Cunningham, Allbritton's daughter, said. "True stories are what he read, and he just grew up and he wanted to write, which is not me at all. He was very outgoing, but he loved reading up on the old stuff, and he started researching Hot Springs history. That's when he got involved with the Historical Society."

His first published work was a story about the Battle of Jenkins Ferry that his teacher sent to be published in the Arkansas Democrat.

"He had a teacher who submitted something he wrote, and that's what got this whole thing started," Katie Gibson, Allbritton's stepdaughter, said. "He did not tell the teacher to submit it. The teacher did it on his own, and that is what began this whole writing process."

Allbritton was recruited by the FBI before he graduated from Lakeside High School, and he worked as a statistical clerk at the FBI headquarters in Washington, D.C., in the IBM Statistical Section for five years. He then spent six years as an investigator with the FBI, which also saw him move to Little Rock.

After 11 years with the FBI, Allbritton quit to become an insurance adjuster.

"He worked at the FBI until I came along, and then he turned down a transfer and took up insurance adjusting," Cunningham said. "That's how we ended up in Hot Springs again. ... He did that because they were trying to transfer him to a dangerous area, and with a family, he didn't want to do that. That's why he switched careers."

Upon his retirement in 1993, Allbritton returned to Hot Springs and began volunteering at the Garland County Historical Society.

"He was a wonderful on-the-ground volunteer, helping people with whatever they needed," Robbins said. "He also was a very strong leader. He was president three times and board member just about forever. In the last few years, he's been our board member emeritus. His leadership has been wonderful, and of course, during those years, he also was researching his wonderful books and articles about Hot Springs. It's hard to imagine the Historical Society without Orval."

His first book, "Leo and Verne: The Spa's Heyday," was published in 2003 and was quite influential for many authors whose works centered around the Spa City.

"He really helped me indirectly and the way he was a huge help was that I used his books -- and I think I can speak for Guy (Lancaster) as well -- I think we kind of use his books, particularly 'Leo and Verne', which I think in my opinion is his best book, we kind of used that as a starting place for trying to kind of fill in some of the murky gaps of Hot Springs," Christopher Thrasher, who co-authored "The Murder of Oscar Chitwood in Hot Springs, Arkansas" with Guy Lancaster, said.

"We would see a newspaper account, we'd see a reference to some gangster or somebody in law enforcement, and we would go to the index of Leo and Verne. 'Did Allbritton mention this guy? Does Allbritton have something here we can follow up on?'," Thrasher said.

"And in many cases, he did. In many cases, we were able to go and even cite Allbritton directly, which we did several times, or -- and I really appreciate this about Allbritton -- is that he was really good about citing his sources and being very transparent about where he was getting things."

Robert Raines, founder and director of The Gangster Museum of America, said Allbritton was instrumental in helping him get the museum running.

"Not being from here and not really journalistically trusting all of the legends that you could hear around Hot Springs, we had to have a way to filter the legend from the truth, and he became that guy," Raines said.

"When I first started shooting videos and start interviewing people here, I would call Orval and tell him to come in and look at the wild tracks and check what these folks were saying," he said, recalling guests such as Clay White, a former FBI agent who was later elected Garland County sheriff, and Eugene "Bud" Canada, another former Garland County sheriff, state representative and state senator.

"What they said, I wanted him to listen to it and keep me going down an accurate and an authentic path because that's what I wanted to do," Raines said. "I didn't want to just come in here and maybe do an attraction. I wanted it to actually be a museum."

While the Garland County Historical Society initially "didn't want to have anything to do with it," Allbritton later offered to help, Raines said.

"I was going to tell the story somehow or other, with or without (the Historical Society's help), and I had a lot of information from the other historical societies around the country," he said. "And Orval came over and said, 'If you need me, let me know.' And boom, he got more calls from me than he probably ever expected. But he was just that kind of guy. He was glad; he wanted it to be right."

Allbritton had a unique view of history due to his proximity to it, both in time and space.

"I think it'd be really hard to replace him ... and he's a transitional figure," Thrasher said.

"He's born back in the '20s, and so he kind of grew up in Hot Springs in this era when the gangsters were still there. So he's kind of coming out of this folklore, but then, of course, he became an FBI agent, so he gets these really fantastic investigative skills and gets really good at tracking down leads, and really good at understanding organized crime and these types of things," he said.

The impact of Allbritton on history in Hot Springs will be felt for years to come.

"If he was your friend, you were blessed, because he was a wonderful friend," Robbins said. "And he was such an inspiration and an example of how to preserve history, how to enjoy history, and how to recognize its importance, and it's fun. He was an extraordinary human being." 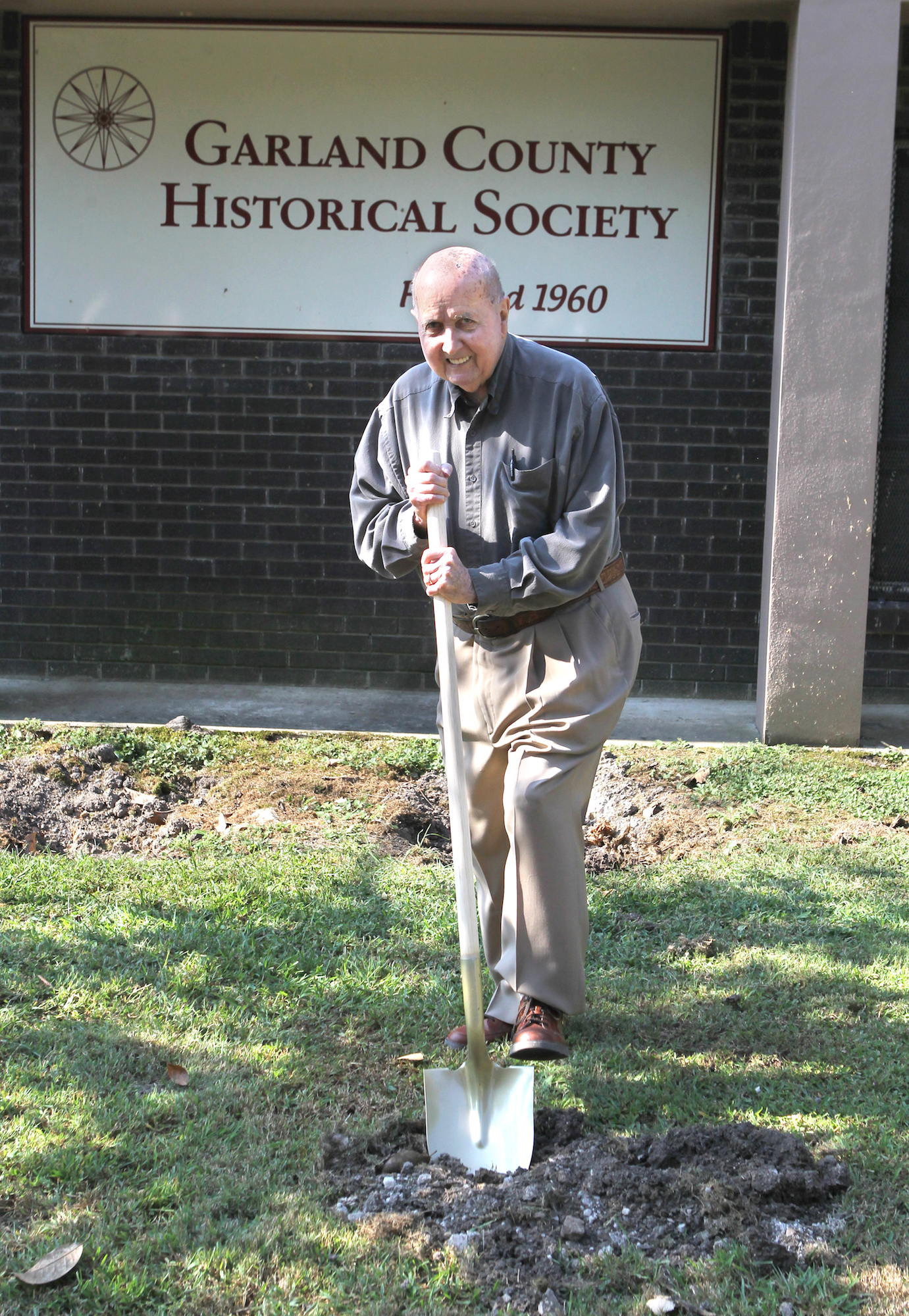 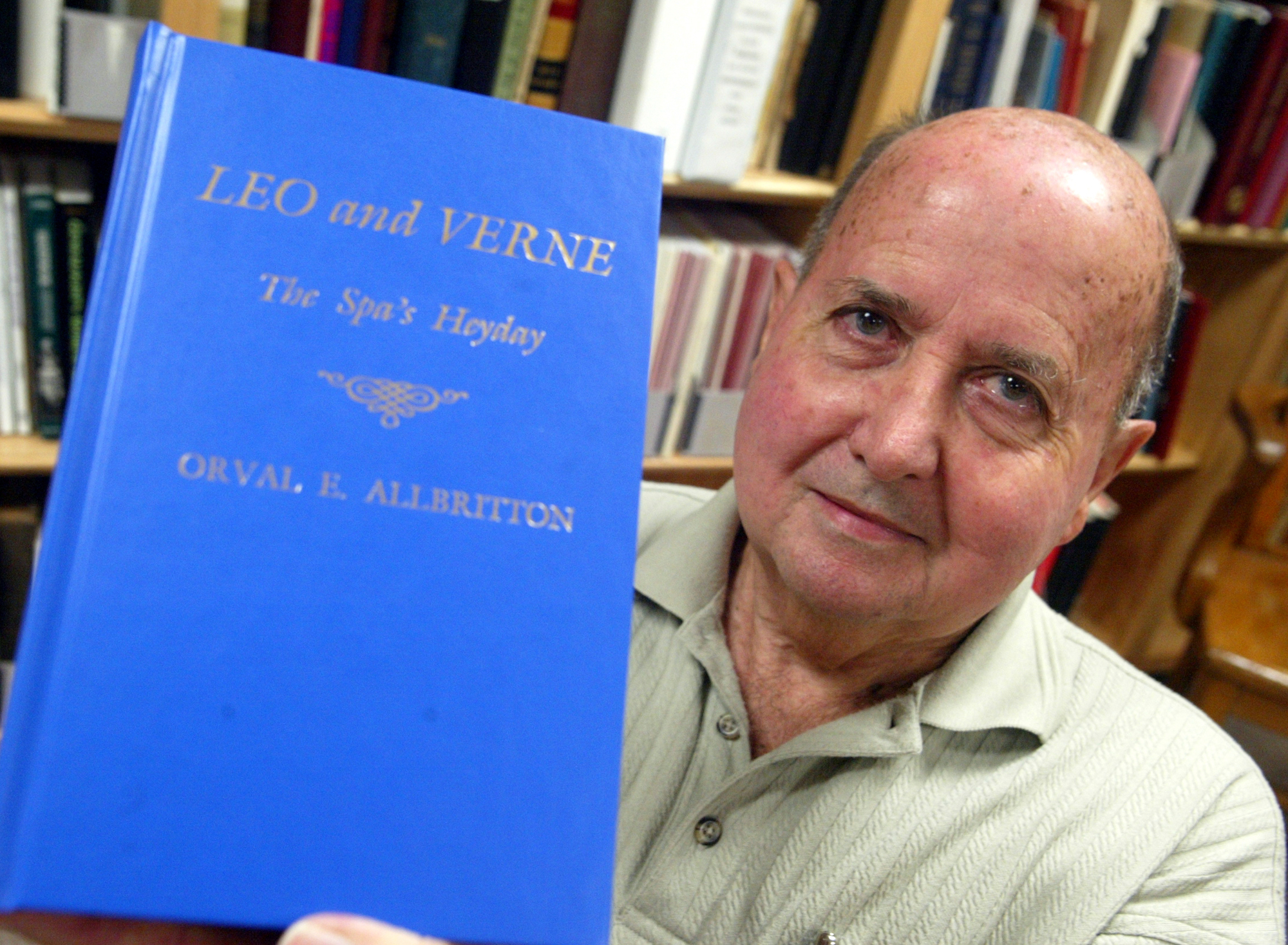 Orval E. Allbritton holds up a copy of his first book, "Leo and Verne," about Mayor Leo McLaughlin and Municipal Judge Verne Ledgerwood on Sept. 29, 2003. - The Sentinel-Record/File photo