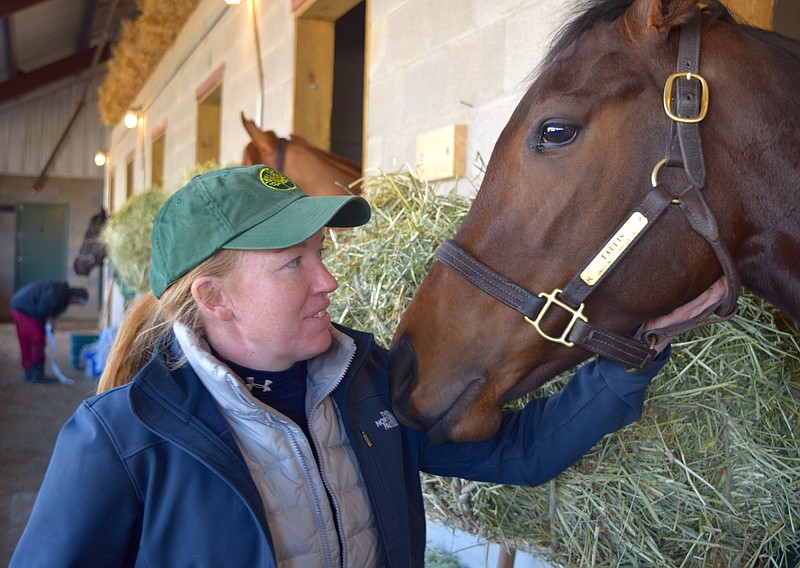 Trainer Lindsay Schultz rubs the face of Alex Joon, a 5-year-old gelding that Schultz trains for Ten Strike Racing. - Photo by Donald Cross of The Sentinel-Record

Lindsay Schultz, whose first career win came at Oaklawn on Jan. 8, 2022, feels she may have gotten into the world of training a bit late, but the 34-year-old trainer has started off her second season at Oaklawn on a solid note with two wins from eight starts.

"I'm kind of old for this," she said of striking out on her own. "I think so. When you look at other young people, they normally start before they turn 30 because what is neat about America is you can start with one or two horses. ... In other countries, a lot of times they have to like rent a whole yard or a whole barn, and here we don't have to do that. So a lot of people, they might just pick up one or two horses and go on from there."

Schultz has been in the business for about a decade, working about eight years under Breeders' Cup-winning trainer Tom Proctor, who has not raced at Oaklawn since Include Betty won the Grade 3 $400,000 Fantasy in 2015, and a year under Hall of Fame trainer Shug McGaughey before striking off on her own.

Growing up riding hunter-jumpers -- also known as show jumpers -- in Connecticut, Schultz graduated from the University of Louisville's Equine Industry Program before entering the prestigious Godolphin Flying Start program. During her two years in the program, she decided she wanted to get into training.

"I had always ridden horses growing up, and I went to college at University of Louisville," she said. "You're right outside the Kentucky Derby, it's hard not to (get interested in racing). ... There's so much more to the thoroughbred industry, and there's so much more to racing. It's a competitive sport, and we can manage these horses' careers, and also you manage your own business, and there's so many different facets of it. So I definitely never get bored."

Schultz said training is more than working with her horses every day.

"When I started my own stable ... now you're actually running a business," she said. "You're making this business out of it, but you also have employees that you're responsible for. And you have owners that own these horses and you're responsible for managing their investments properly and making sure they have a great time but also being conscious of their money. I think it's -- there's just so many different aspects of it."

Training is not the easiest job, but Schultz said "coming to work every day" is the easiest part because she loves working with the horses.

"It's hard because it's something that people do with their extra money," she said. "So it's supposed to be fun, and it's their hobby, and a lot of times you don't make money doing it. So I guess it's hard to make sure that you actually have a legitimate business, and you're not just doing it so people can have a good time."

Having just 16 horses in her stable does not make the job any easier.

"There's a certain type of horse that fits at Oaklawn, and if I don't have that certain type of horse and if have strings in three different places, it's no problem," Schultz said. "You just send them to a different race track and you're going to find the best spot for the horse. But if you only have 15 or 20 horses, you're only going to stay in one place."

Ten Strike Racing, a racing partnership based at Oaklawn run by Marshall Gramm and Clay Sanders, is one of the three main owners Schultz works with.

"I had known Marshall Gramm for a few years, and I had a horse for him while I worked for Tom Proctor," she said. "So he gave me the chance to get started. ... I have a good resume. I haven't done it myself, obviously -- who knows if I'll succeed or I'll fail -- but they were excited, right? They were excited to kind of get in and help me get going."

With nearly "exclusive access," the owners know Schultz will be working with the horses and can talk to her.

"I'm not going to talk to anybody else," she said. "I don't have 50 owners; I only have three. So for those guys, and I think for other people now -- I just have another maybe two owners aside from these original three -- but I think for them it was, 'Look, she's not that big. We know she's gonna be in there every day with the horses, and we can call her. And we can say what about that maiden 15 next Thursday or something and she's wanting to talk to us and be as excited as we are.'"

Schultz said having worked with respected trainers helped give her confidence to strike out on her own.

"It's given me the confidence to know that I know how to take care of horses, and I've been around," she said. "I've seen them work with other owners and seen how they manage horses. Look, it's all different when you do it yourself, but definitely I think all the different jobs I've had have kind of given me that confidence to get started."

While horse racing is still a male-dominated sport, Schultz said with the horses doing the hard work, the gender of those working with the horses is not a help or limitation.

"Training is a hard job, whether you're a man or a woman," she said. "Maybe some owners would prefer to have a man over a woman to talk to, but honestly, I don't know that I feel slighted or that it's any harder. And actually, it's kind of neat because the horses are the one doing the sport, so I compete on a level playing field with the men. We have a neat industry. Even in the Olympics men compete against women because it's a horse that's doing it."

Oaklawn is the track Schultz mainly considers her home, but she has had horses run at Turfway, Churchill Downs, Keeneland and other tracks across the country. Her work with Proctor, which included a three-year stint managing his biggest owner's farm, and McGaughey has led her to even more tracks.

"I had my first starter at Churchill when I first took out my license and then came down here and then we went to Monmouth for the summer," she said. "We ran some at Colonial, Delaware, and then we went back to Keeneland and Churchill and ran a couple in Indiana as well.

"Working for Proctor and for Shug, I got to go to the best tracks all around the country, so at least I've gotten to see them. I spent time in California for Tom, and I got to spend a summer up at Belmont when I worked for Shug and see Payson Park. With Proctor we were at Fair Grounds; we were at Tampa. Actually, when I was on the farm, I got to go to Dubai with a horse for him. So, I mean, I've gotten to see a lot of different places which hopefully helps me in the future."

Working with Ten Strike Racing has made Oaklawn "feel like home," Schultz said.

"They love it here, so they kind of make it feel like home," she said. "You always have people at the races. And another owner, Scott Galloway, he's from Stuttgart. They all love it at Oaklawn."

Training does not follow a standard 8 a.m. to 5 p.m. schedule, Schultz said.

Following morning workouts, Schultz moves on to planning races and the business side of things.

"You have to do things like payroll and pay the people and bookkeeping and figure out how much you spend at the tack shop this month ... and then you're here in the afternoon kind of doing the same thing," she said. "Cleaning the stalls and feeding the horses, maybe getting them out. We like to walk a good few of them in the afternoons and let them stretch their legs a little bit more."

Schultz said getting involved in training is not easy, but learning to take care of the horses is key.

"Make sure you get in learning the business at the ground floor," she said. "Make sure you learn how to be hands-on and take care of the horses, because that's what it's all based on. After you've done that you do need to realize that if you're going to train horses, it is a business and you're going to be responsible for your employees and your owner. So you need to be smart about it and learn how to handle a business, but I think you can do that as long as you learn the horsemanship part of it." 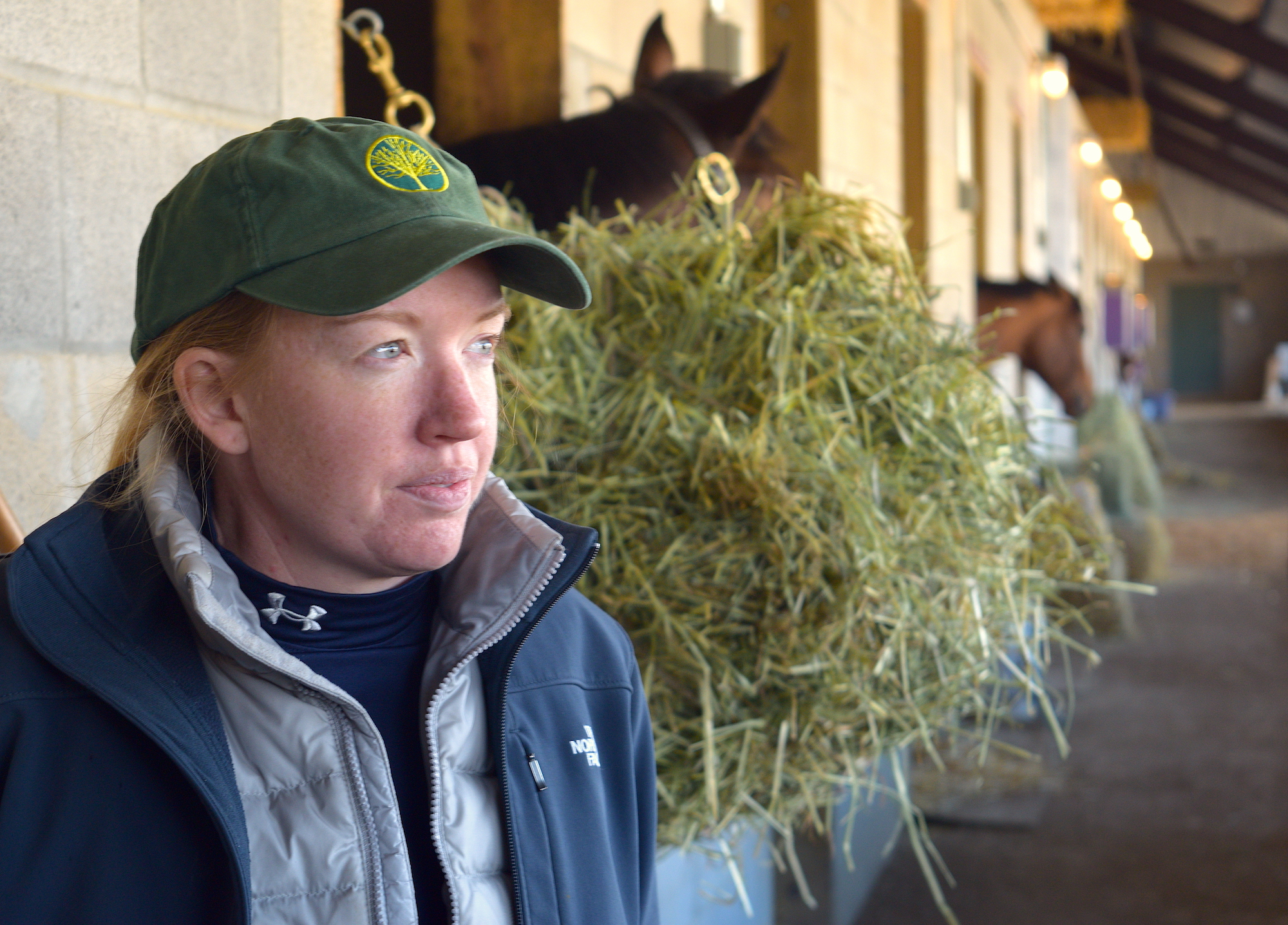 Lindsay Schultz discusses her work as a thoroughbred trainer at Oaklawn. - Photo by Donald Cross of The Sentinel-Record 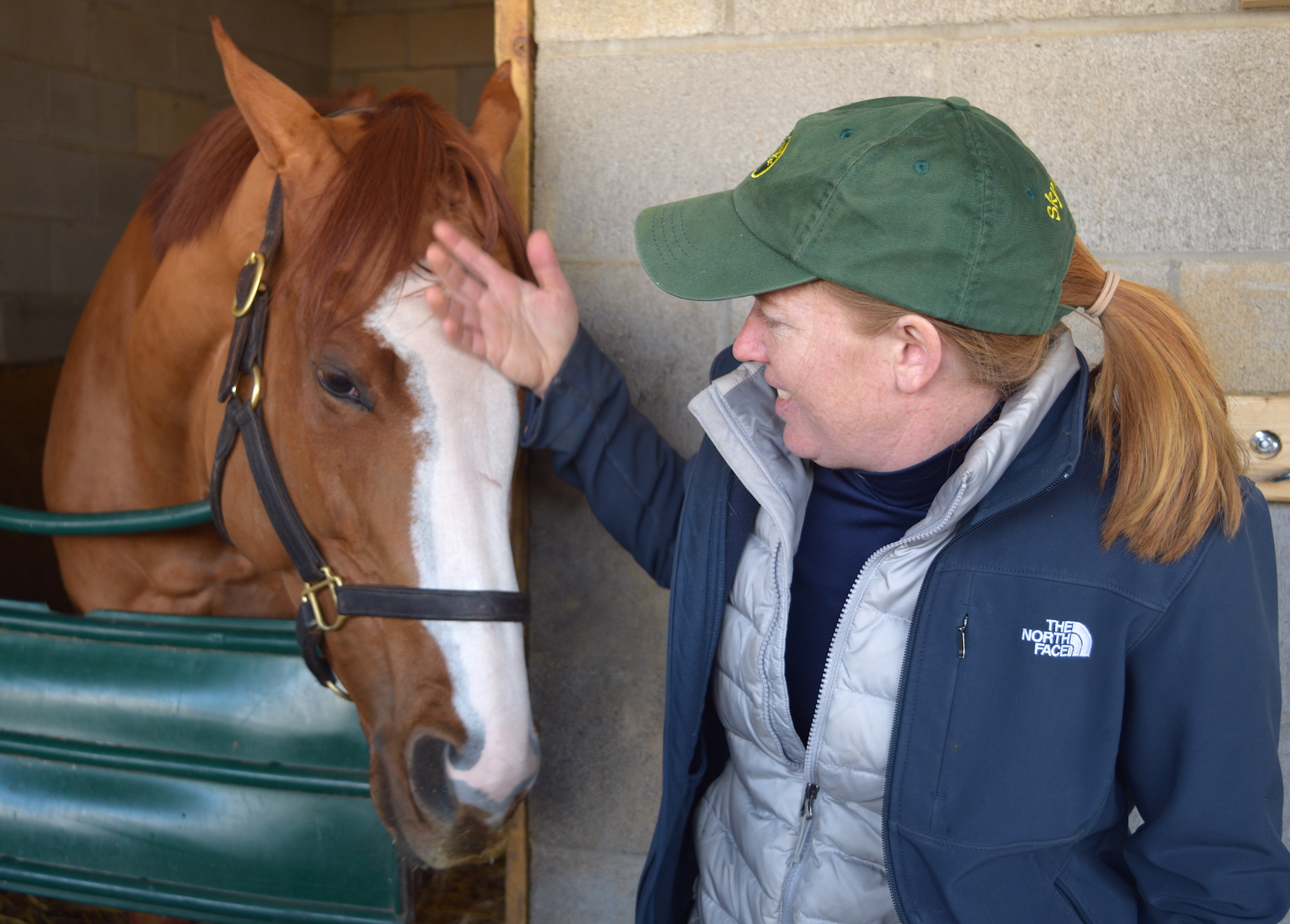 Trainer Lindsay Schultz rubs the face of Chakra, a 4-year-old mare she trains. - Photo by Donald Cross of The Sentinel-Record 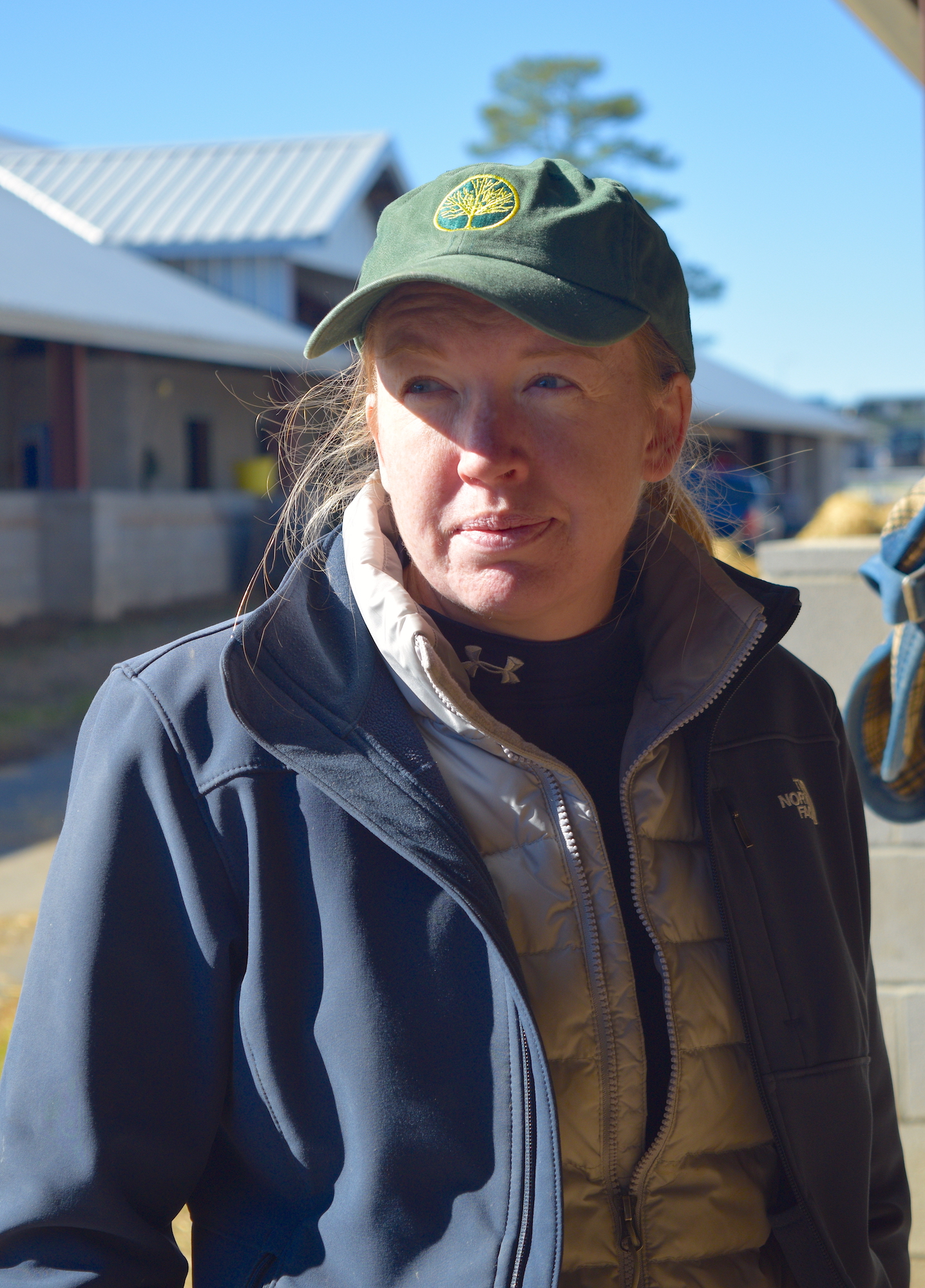 Lindsay Schultz discusses her work as a thoroughbred trainer at Oaklawn. - Photo by Donald Cross of The Sentinel-Record

Print Headline: The business side