Night on town: Catching up on local hoops 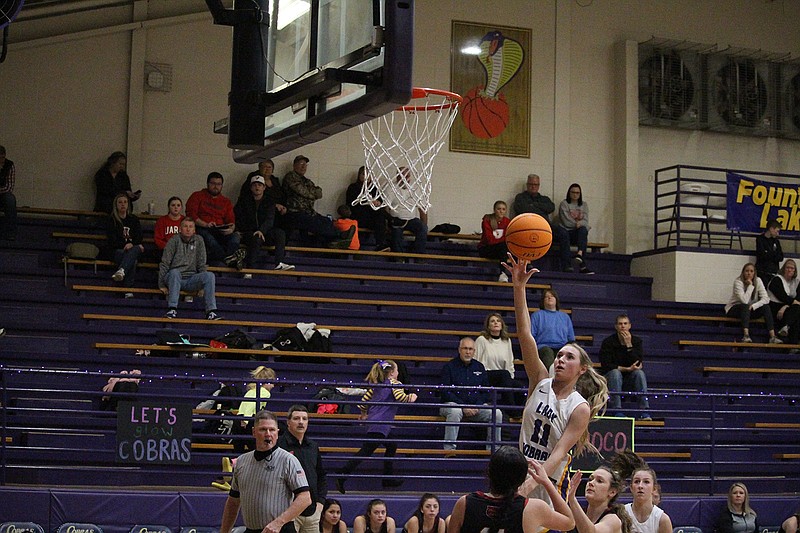 Time on my hands, I stopped by a local basketball arena Friday night and made the following discoveries, of which more frequent watchers may be aware.

As in my formative years, most baskets count two points. Those made behind a line stretching from the baselines beyond the free-throw line count three. The latter rules change altered the game -- for good or not, I'll let you decide -- like nothing since the center tap or perhaps the hanging of peach baskets (later turned into nets through which the ball could drop cleanly).

It drove some people out of coaching, if not to strong drink. Thirty-something years ago, a longtime Garland County coach watched one of his players -- a senior, at that -- launch an unguided missile from the baseline, his team leading, for no apparent reason. The coach in question won the game then shook his head, wondering whatever happened to the 1-3-1 zone defense his teams once executed so well, and said, "I used to could really coach this game."

Personally, I would prefer that high school hoops team hold off until the new year and that the zone defense be abolished. After watching it so long, I now cannot believe that Arkansas girls did not play five-on-five basketball sooner. Other trips may yield more observations, though let none forget, it's all for the kids.

I quit showing up when the urge to critique amateur players became too great. I once suggested to a coach, who at last check has a winning record, that if a certain young lady were the team's best player, it didn't have one, and suggested a roster change that might correct the problem.

Bill Taylor, among the most quotable coaches I've met in 40 years, once said before a state-tournament game, "I'm not sure we have a best player." Bill knew one on sight, coaching son Brooks to two state titles at Buffalo Island Central after developing Ferdinand DeGreffenreed at Delta. DeGreffenreed got an unkind spin on a shot that would have stopped Caddo Hills one game short of the Class A finals with the team's only loss in the 1989-90 season.

Chris Jones, an inspirational leader for Jerry Bridges' Indians, played under the weather that night; he now coaches varsity boys at his alma mater. Caddo Hills beat Caruthersville, and the one-man stage act known as Kenny Bohannon, for the 1990 title, then slew Malvern in the former Overall tournament before losing, on tired legs, to Pine Bluff, that star-crossed area team, much loved by its fans and considerably less by opponents, finishing 37-1.

One other time, I stopped attending games, at least that of a certain local team, when the opposing squad sank free throws before the tip after the host school was caught dunking in warm-ups. Another time, the local side had a player leave the bench during the game, the coach not finding out, he said, until seeing the player in a supermarket and asking him why he hadn't been at practice lately. I am not making this up.

The games I watched the other night pitted Mena and Fountain Lake, designated as conference opponents this year and requiring some mountainous travel on certain school nights. I'm convinced that no one involved with the Arkansas Activities Association passed geography in high school, asking only of the AAA once that it send my lifetime service award (though presented in Hot Springs) by mail and asking permission to zing the group if the occasion warranted. Both requests were granted.

Matt Carter, now at Fountain Lake and later of Jessieville, sent a team to the 2013 state finals, the only year since 2007 that the games were not played in Hot Springs. Jerry Chumley, in his last game before leaving for Benton, helmed the same Lady Lions to the 2007 finals -- one matchup too many with Carlisle that season, it turned out.

Carter, who played for the idyllic 1993 Cutter Morning Star Eagles, returned 20 years later to Barton Coliseum, where CMS lost to Buffalo Island Central in double overtime. Both the team Matt played for and the Jessieville squad he coached in 2007 were unbeaten before but not after the finals. Greenland activated the mercy rule -- which no one should hope to see in a state final -- against one of the great local teams I've seen. I would place Kellie Lampo, whose mom played at Jessieville and herself transferred from Fountain Lake, as the best local girls' player I've seen, ahead of a few who played at the NCAA Division I level.

Carter returned to girls' basketball, his strong suit, at Fountain Lake after a fling with the CMS boys, there sampling the occasional wizardry of one Ryan Brown. Fountain Lake was winning with Rhonda Marvel (her dad, Ronnie, was the coach), Kim Smedley and Helen Hulsey when I started here. Later, I was privileged to see Valerie Hulsey and Chloe Pratt play at the school, two for the time capsule, although Chloe might have preferred volleyball more; she and brother Logan went to Vanderbilt, so who's quibbling over a favorite sport.

Because of homecoming, the Lady Cobras played the last game Friday night. Mena, down 15-14 at halftime, went by the Lady Cobras like ships in the night, winning 46-28. An insider said these disappearing acts have become too common with the home team. Mena's coach, asked what halftime adjustments he deployed, said only, "I wish I knew."

Didn't catch the queen's name but remember a sign in the home team's cheering sections: "(Your name goes here) is my favorite benchwarmer." Look for that student-athlete in the student yearbook holding the ball for the team photo.

Fountain Lake won the boys' game, that one requiring late activation of the running clock. Jake Dettmering has another strong team, one that I would gladly watch play Lake Hamilton (coached by Scotty Pennington) anytime, anywhere. These Cobras shoot three-pointers like FL teams once coached by Chris Meseke with players taking turns in the Casey Sheppard role as top gun.

Lake Hamilton has lost only to Sylvan Hills (one point on the road) and at home to Pine Bluff, both times showing the effects of a weekend trip to Missouri. No Garland County boys' team has won a state title in basketball since the 2000 Lakeside Rams. These Wolves have a chance.

Pennington, whose father coached a state champion at Emerson, helms a team on which son Zac is a star player. Strength to that man for what some coaches find a daunting challenge but Scotty apparently does not.

Print Headline: Night on town: Catching up on local hoops