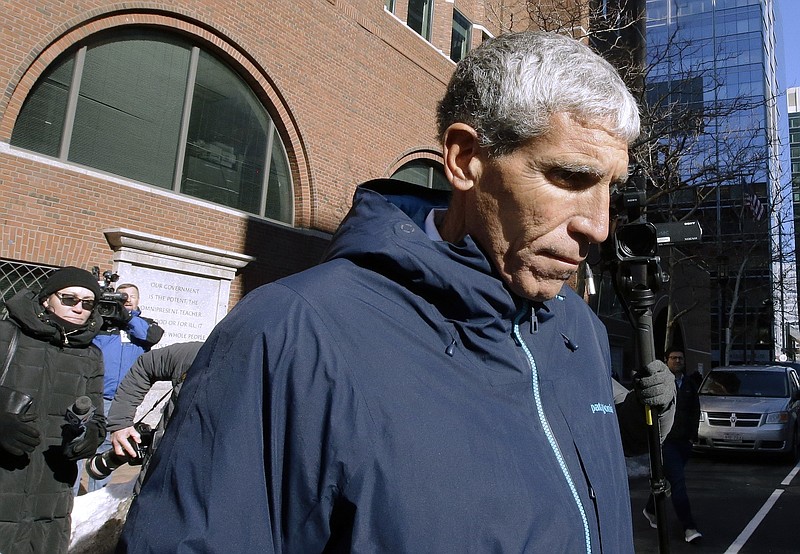 William "Rick" Singer, founder of the Edge College & Career Network, departs federal court in Boston on March 12, 2019. The mastermind of the nationwide college admissions bribery scandal, who was sentenced to three and a half years in prison on Jan. 4, is now working with underserved youths in Hot Springs to help students prepare for the future. - File photo by The Associated Press

William "Rick" Singer may be known best as the mastermind behind the nationwide college admissions bribery scheme, but he is hoping to change that, at least in the minds of youths here in Hot Springs.

Singer, who has been working with High Impact Movement Inc. for about a month, met with a group of 14 students via Zoom on Tuesday, telling his story and outlining what he hopes to help HIM do.

"We had our students watch the Netflix show, the little documentary on the situation (Operation Varsity Blues: The College Admissions Scandal)," Amos Gray, CEO and founder of HIM, said. "I just told them, 'Hey, guys, we've got a guest speaker, and we're going to talk about college. We're gonna talk about leadership. We're gonna talk about business, and you're gonna hear a story.' And so when I put the Zoom on, you could just feel the air suck out of the room."

Singer talked with the students about making good decisions and dealing with the consequences of bad decisions.

"It was pretty amazing the way the students reacted to it," Gray said. "They asked a lot of questions, and one student even said, 'Hey, because of what you did, you took a possible spot from a kid that looks like me. It just kind of hurts to know that happened that way.'

"And Rick handled it well. He said, 'You're exactly right, and that's why I'm doing now when I'm doing. I want to take what I was doing that was wrong, and I want to make it right by giving and serving and taking what I know, and doing it the right way with students who typically wouldn't be able to get the type of information I have, and I'm sharing with you.' And the young lady looked up and said, 'Thank you.'"

Gray said Singer has created multiple lessons that deal with leadership, going to college and developing a business for students who are in the program. Singer and Gray will be working with the students individually to help tailor their courses of study to help prepare them for their next steps in life.

"Anytime somebody says they want to work with under-resourced kids, you kind of go, 'Really? Are you sure?'" Gray recalled. "I just ignored it. I started kind of talking with other people about the workforce program we're trying to do over here and everything. ... I was going back through my email again, (and) he emailed me again."

The two then had a conversation about what Singer could offer the program.

"I told him exactly who I was, and why I want to help," Singer said, recalling the conversation. "'I want no recognition. I just want to give you and your community what I gave to thousands of very wealthy families that I charged, that I want to even the playing field. Would you allow me to help you?' And he had the courage to say, 'Yes, I believe in second chances, and I need the help to reach the kids and adults in my community. And I don't have the resources to do it. And if you can provide that to me, let's partner together.'

"And ironically, it was two weeks before my sentencing. It wasn't meant to be that way. There was no hokey -- hocus pocus or anything like that. It's just God brought me to Amos, and Amos brought me to a place where I can help kids in Arkansas, and especially Hot Springs. It's a blessing."

Singer, who pleaded guilty and was sentenced to three and a half years for his role in the bribery scheme, is set to go to prison on Feb. 27, but he plans to have regular meetings with the students before he has to report to serve his sentence.

"I am going to, twice a week, have meetings set up with each one of the young people and coach them like I used to charge $10,000, $20,000 a year," he said. "I'm going to coach each one every week before I have to go away and give them enough to get the process going. And then Amos and his team, which I'll train, will take it going forward with the college part."

Gray said Singer is providing HIM with information and lessons to help the organization aid the students involved with HIM.

"Over the last several weeks, everything has been HIM," Gray said. "It's not about Rick Singer. It's about HIM and how we can resource these young people with material and opportunities that will help them get from A to Z, and he does not want to put his name on anything. He is not asked for any compensation, anything like that. It is all been about HIM and how do we take what we're doing here in Hot Springs, Arkansas, with young people and transform these young people, and then take it out to the rest of the country and say, 'Hey, this is what we're doing in Hot Springs.'"