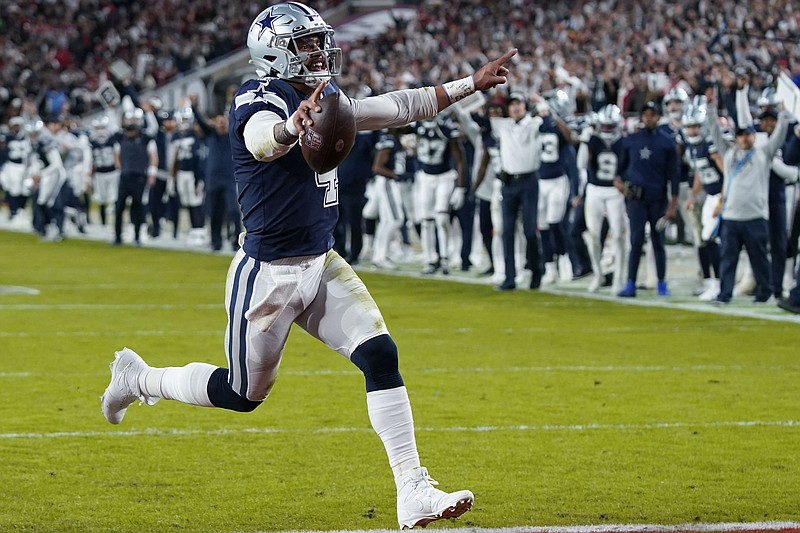 Dallas Cowboys quarterback Dak Prescott (4) runs into the end zone on a touchdown carry during the first half against the Tampa Bay Buccaneers Monday in Tampa, Fla. - Photo by John Raoux of The Associated Press

Many a National Football League season has hinged on a Dallas-San Francisco game. Guess which teams are offered for your viewing pleasure in the weekend's last of four divisional-round playoffs Sunday?

You guessed right picking these bluebloods, though the matchup came by luck of the draw. This will be their 38th meeting (Dallas leads 19-18-1), their first playoff matchup coming in the 1970 season and the most recent last January. Looking way back, neither team had won a world championship (the Super Bowl then was only three years old) and both were noted for not winning the big one. Like the Buffalo Bills today, thanks in large part to the Cowboys.

At one point, though, every time one looked around Carmen Policy (49ers) or Jerry Jones (Cowboys) was hoisting the Lombardi Trophy as league champion. Dallas and San Francisco are tied with five Super Bowl wins, one less than New England and Pittsburgh.

Dallas and San Francisco played the "other" NFL game on Saturday, Dec. 23, 1972. In what is recognized as Roger Staubach's first miracle comeback, Dallas won 30-28. That game, though, was overshadowed by Pittsburgh 13, Oakland 7, the late Franco Harris making the Immaculate Reception.

The 1994 and 1995 Super Bowl championships were effectively decided in bidding wars for Deion Sanders, now "Coach Prime" in the college ranks, then the league's dominant cornerback, a dangerous punt returner and a pretty fair major-league outfielder. San Francisco won the 1994 title, beating Dallas in the NFC championship game when Sanders got away with mauling a receiver downfield. Steve Young then passed San Diego, the surprise AFC winner over Pittsburgh, into Super Bowl submission. Barry Switzer, ending his first season on the Dallas sideline, was penalized for protesting the non-call on Sanders.

Sanders signed a free-agent contract with Dallas in the '95 season, helping make Switzer's second season in Dallas last longer and conclude with the Lombardi Trophy in hand. Skip Bayless' book "Hell Bent" tells the inside story of that fascinating season, including stuff about Troy Aikman's personal life to which the quarterback told Bayless he was now a non-person in his orbit.

Former Cowboy assistant and Oklahoma Sooners head coach John Blake figures heavily in that season -- so does Michael Irvin -- making Bayless' book a must for any Cowboy insider. The '95 season, with Dallas beating Pittsburgh, is the last that Dallas won the Lombardi Trophy.

This is a rematch of a first-round playoff game last year when the NFC East champion Cowboys lost at home to the 49ers. Dallas could not get a handle on Deebo Samuel and Dak Prescott misjudged the clock on the last play.

Even with Brock Purdy, the last player chosen in the 2022 NFL Draft, at the sport's most crucial position, the 49ers are judged a tad better. San Francisco, playing at home as NFC West champion after beating division rival Seattle in the first round, is favored by 3 1/2 points. Dallas, especially Prescott (four touchdown passes, another score running), looked sharp against Tampa Bay, but let's not forget that the Bucs, playing at home as NFC South champion despite an 8-9 record, were outmanned. Tom Brady, he of seven Super Bowl titles, was little more effective for the Bucs than an aging Joe Namath for the Los Angeles Rams in 1977.

With San Francisco down to its third-string quarterback, the 49ers' mission is to get mistakes out of Prescott -- a recurring problem for No. 4 until a flawless game Monday night -- and neutralize Dallas on the ground. One cannot see Dallas winning without a monster game by Prescott, which may be asking too much against that defense. The Cowboys also have thrown in some clunkers for coach Mike McCarthy, who is on a game-to-game contract to hear media critics. As for the Dallas special teams, where's Rafael Septien when the Cowboys need him?

As in other NFL cities, but especially in north Texas, Dallas is rough on quarterbacks and head coaches. Three straight playoff losses drove Don Meredith into retirement in the 1960s. Even as late as 1971, Landry alternated quarterbacks on every play of a midseason game with Chicago. Think Stephen A. Smith would not rip McCarthy if he did that?

Craig Morton started at QB against San Francisco in the 1970 NFC title game at old Kezar Stadium in the city that singer Tony Bennett figuratively left his heart. A running back who would be heard from (although not verbosely) the following year keyed the Cowboys' first win in a league championship following two losses to Vince Lombardi's Green Bay Packers. It wouldn't be long before he pouted his way out of Dallas, but at that time, Duane Thomas looked like the best young NFL running back since Jim Brown.

Thomas should have been named Super Bowl MVP after a 24-3 win over Miami at old Tulane Stadium in New Orleans -- the honor went to Staubach, throwing TD passes to two guys, Lance Alworth and Mike Ditka, who may have played with leather helmets. Thomas, who would never play in another Super Bowl, made one definitive comment that day: "If this is the ultimate game, why are they playing it again next year?"

That and Dallas' rout of Denver after the 1977 season were the NFC's only Super Bowl triumphs in that decade, following the merger of the NFL and AFL, the one that Namath did not bring about by himself in Super Bowl III (Jets over Colts) no matter what anyone says.

The Cowboys played San Francisco in the '71 NFC title game, the last big pro game in the Cotton Bowl before owner Clint Murchison moved his squad to Texas Stadium in suburban Irving. Arkansas club owner Jerry Jones takes his shots in the press -- the Cowboys now play home games in suburban Arlington, halfway between Dallas and Fort Worth -- but has kept the Dallas name, for which he deserves some credit.

The Cowboys and the 49ers met in the playoffs in each of Jones' first three championship seasons, Dallas winning the 1992 NFC crown at marshy Candlestick Park and repeating at Texas Stadium the next year before Jones and coach Jimmy Johnson severed their working relationship.

No retelling of this series would be complete without mention of The Catch after the 1981 season. Dwight Clark pulled in a third-down pass from Joe Montana on a ball that some still claim Joe Cool was throwing away. Dallas cornerback Everson Walls looked up for the ball in back of the end zone and found himself on the cover of Sports Illustrated. Still, it took a Danny White fumble after Tony Dorsett almost broke for a touchdown that made the Niners' 28-27 win complete.

That was San Francisco's first Super Bowl championship season. Four more, equaling the five by Dallas, have followed. Take it from one Cowboy fan that day, only the Ice Bowl loss to Green Bay in 1967 hurt worse than The Catch.