What next for skidding Razorbacks? 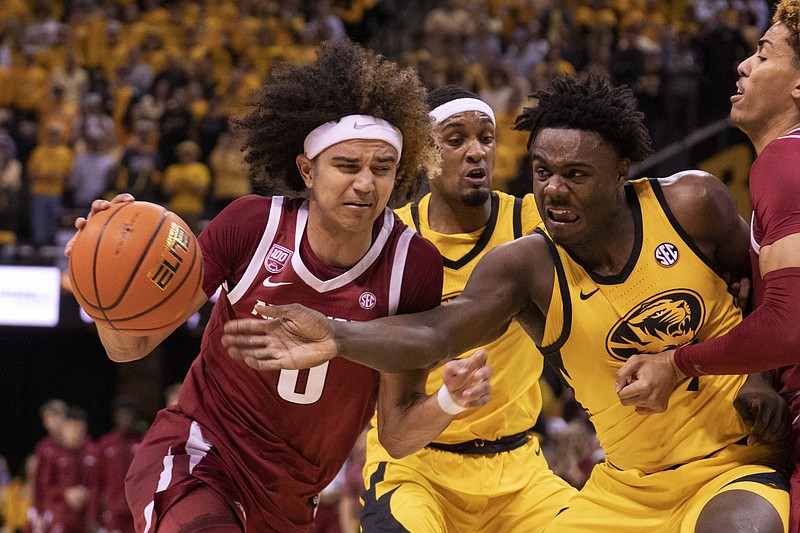 Arkansas' Anthony Black, left, dribbles past Missouri's Kobe Brown during the first half Wednesday in Columbia, Mo. - Photo by L.G. Patterson of The Associated Press

Razorback basketball, remember, was meant to salve any wounds from football, in which fine young men who run through an "A" formed by the band before each home game were caught in November driving with expired licenses.

At least, Sam Pittman's team salvaged a winning record (7-6 is better than the alternative) after beating Kansas in a Liberty Bowl that, one reads, generated a large television audience and for which those who paid for seats on a cold Wednesday night in Memphis should take a bow.

Basketball beckoned like the Carpathia to Titanic survivors, a typical response for Razorback Nation when the football team goes off the rails. Eric Musselman, fresh off back-to-back Elite Eight appearances, appeared to have rounded up the players that, for the first time since Nolan Richardson coached, could get Arkansas back in the NCAA Final Four.

Wednesday night, one could almost hear The Who playing "Won't Get Fooled Again," which Arkansas fans adopt as a fight song when things go wrong in one sport or another.

Arkansas, once a top-10 team, plunged to 1-5 in the Southeastern Conference with a 79-76 road defeat to Missouri. Ever current, some Razorback fan warbled that Arkansas has lost to all five SEC schools it has played, recalling a homecourt win over Missouri after trailing by 17 points.

Arkansas, 12-6 overall, is tied for 11th in the conference (1-5) with three other SEC West teams: LSU, to which the Hogs lost their league opener on the night of the Liberty Bowl, Mississippi State and Ole Miss. The Rebels went on the road Tuesday night for a victory over South Carolina that raised their season record to 9-9, coming now to Fayetteville on Saturday for an 11 a.m. tip-off at Bud Walton Arena.

In most years, a win over South Carolina would rustle few leaves in the SEC backyard. This Gamecocks team, 8-12 (1-4 in the league), has not lived up to the promise hinted at in a 71-68 road win over Kentucky at Rupp Arena, since losing 94-53 to Texas A&M and 70-58 to Ole Miss, both at home. Who knows in which direction their seasons will turn before Arkansas goes to Columbia, South Carolina, for a Saturday matinee Feb. 4.

News that Kendal Briles was leaving Pittman's staff for the same role, offensive coordinator, at TCU -- and that ex-UA aide Dan Enos was coming back as OC -- took some Razorback fans off the hook after the Missouri rematch.

Digesting a three-point game at Mizzou Arena that the Tigers outscored Arkansas 30-23 from the line -- on 14 more attempts -- no doubt kept some fans awake.

"I just have never coached in a game where four players fouled out," said Musselman, though not in a harsh way. "I give Missouri credit. They beat us."

Davonte Davis, Makhi Mitchell, Kamani Johnson and Jordan Walsh totaled 20 of Arkansas' 33 fouls, 10 more than for which Missouri was called. It came down to an Anthony Black three-point attempt (15 points, eight rebounds) on which the Razorback player was closely guarded.

Black looked at his five turnovers as a contributing factor to the defeat after Arkansas once led by 10 (though it was down 35-34 UA at halftime). Had Black's last shot swished the net, overtime would have ensued, although who knows which five Arkansas players Musselman might have used. In that respect, the end was cleaner, Missouri earning the victory because it made more free throws down the stretch.

It was the kind of game ex-Missouri coach Norm Stewart, for whom the playing court in Columbia is named, would have savored. Stormin' Norman threw a packet of gum into a crowd of snarling Razorback fans in Fayetteville one night and said, "Here, chew on this for a while."

It was not the kind of game that made Razorback fans, who heard plenty about one-and-done players and dreamed of the Final Four when Nick Smith Jr., Walsh and some others signed with Arkansas, want to look ahead. Smith, whom it is optimistically noted will return in February, might evolve into Michael Jordan, or not. We shall see about that.

Without him and Trevon Brazile (season-ending knee injury Dec. 6, though traveling with the team to Columbia and sitting on the bench), one is left with the same questions about this squad: What exactly does it do well? And until reinforcements arrive, is it dead in the water in the SEC?

Print Headline: What next for skidding Razorbacks?