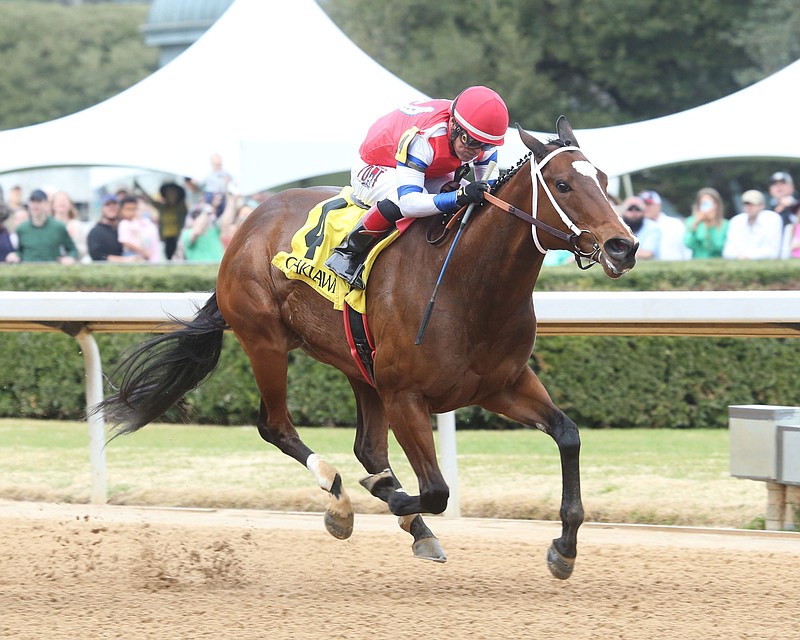 Tape machines should be whirring when the Oaklawn starting gate opens today.

The Arkansas-Ole Miss basketball game (11 a.m., ESPN2) should be half over by 12:30 p.m., when the 10-race card begins. That's something of a "non-winners of two" matchup between two of the four Southeastern Conference members with 1-5 league records. Arkansas, needing a victory badly, and Ole Miss, which just got one, hope to escape the SEC cellar in part or in whole depending on other outcomes today.

Later come two divisional-round games in the National Football League playoffs with only one of the four starting quarterbacks, Kansas City's Patrick Mahomes, not a surprise. Trevor Lawrence, a postseason winner over the Los Angeles Chargers last week despite Jacksonville trailing 27-7 at halftime, takes on the American Football Conference top seed Chiefs in the early game.

The last race Sunday should be in the books when Dallas plays at San Francisco, following a Buffalo-Cincinnati AFC opener.

With graded-stakes action about to bubble up in coming weeks, this is a somewhat slow Saturday at Oaklawn. With only six horses entered, the featured $150,000 American Beauty was moved up to the sixth race. That six-furlong event for older female sprinters has a certain charm, however, with so many previous local winners entered.

The field's only stakes winner is Arkansas-bred Connie K, 5-year-old heroine of the Downthedustyroad Breeders' for state-breds last March. Racing for breeders Randy Patterson and trainer Randy Morse, Street Strategy's daughter has a meet second Dec. 30 to go with three Oaklawn victories. She stretched out for second in the Natural State Breeders' Cup last May 6.

Jon Court, long the go-to rider for longshot-playing fans at Oaklawn, will break from the rail post aboard the 12-1 risk, whose broodmare sire, Indian Charlie, placed third in the 1998 Kentucky Derby for trainer Bob Baffert.

A pair of 2022 Oaklawn winners offer similar low odds with Sarah Harper (Rafael Bejarano, post five) the early choice at 7-5 over Hot and Sultry (David Cabrera, post two) at 9-5. Sarah Harper disappointed at low odds early last season at Oaklawn but won her second start in January for trainer Ron Moquett. That earned her a start in the American Beauty 13 days later -- she placed seventh -- but she finished a rallying second in the Dec. 17 Poinsettia in her last start at 3.

Sarah Harper is one of many horses racing well for Moquett, whose 10 wins had him third in the trainer standings at a 25-percent clip entering Friday's card.

Conway owners Alex and JoAnn Lieblong paid $475,000 for Hot and Sultry, by Speightster, at the September 2020 Keeneland yearling sale. Second in a Dec. 30 Oaklawn allowance, the filly has wins here and at Churchill Downs for trainer Steve Asmussen; not finishing seconds in four starters, she has Norm Casse listed as her new trainer.

Five-year-old I'm the Boss of Me won two Oaklawn races last year, the second off a $50,000 claim by trainer and co-owner Greg Compton after winning her last start at 3 for Rene Amescua. Chris Hartman, second in the Oaklawn standings with 13 wins, won a local allowance with Perfect Happiness as a 4-year-old in December 2021.

Lisette, a 5-year-old from the Wayne Lukas barn, is sired by Uncle Mo and produced by an Unbridled mare. The only local non-winner in the field, she ran fifth in the Dec. 10 Mistletoe and sixth in an Oaklawn allowance Jan. 14. Co-owner and breeder Aaron Sones won the Sir Barton with Lukas-trained Ethereal Road on the Pimlico undercard last year after placing second in Oaklawn's Grade 2 Rebel. The colt was scratched on the eve of the Kentucky Derby, allowing longshot winner Rich Strike to enter the field.

Note the earlier than usual 2:55 p.m. post time for the American Beauty, a prelude to the Carousel later in the meet.