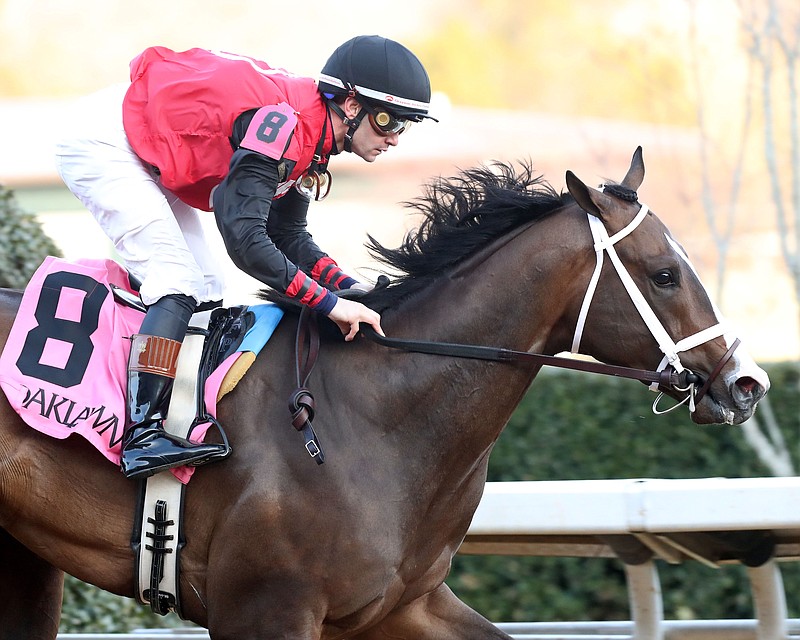 Count this another good Saturday for trainer Brad Cox with his beloved Kentucky Wildcats winning in basketball and one of his Kentucky Derby hopefuls taking a graded prep race for the May 6 classic at Churchill Downs.

Instant Coffee, a last-out Grade 2 winner at Churchill Downs, scored points in a third Derby qualifier with a strong score in the Grade 3 Lecomte at Fair Grounds. Luis Saez rode first-crop sire Bolt d'Oro's son to a 2 1/2-length win in 1:45.12 for 1 1/16 miles over fast-rated but slow surface as the 6-5 favorite.

Instant Coffee added 20 points to the 10 he received in the Kentucky Jockey Club on Thanksgiving week. He has 32 points, second to presumptive Eclipse Award winner Forte, in a series of prep races designated as qualifying events in case the maximum 20 horses enter the Derby. Cox, a Louisville native, was awarded the 2021 Kentucky Derby with Mandaloun after Medina Spirit, first across the line, failed a drug test.

"I think (on the turn) he really started picking it up, stayed on real well down the lane," Cox said. "It looks like there was pace for him to run at, and oftentimes in these 3-year-olds races (around) two turns, you do have pace to run at. Luis did a good job, got him to the outside and he stayed down the middle of the track.

"He likes Churchill and he likes a long stretch. Nice colt."

The long Fair Grounds stretch might keep Instant Coffee on hand for the Grade 2 $400,000 Risen Star Feb. 18 and the $400,000 Louisiana Derby March 25. Epicenter, an Eclipse finalist for Steve Asmussen, finished second in the Kentucky Derby and Preakness last year off Fair Grounds victories. Cyberknife, by Gun Runner, shipped to Oaklawn for the Arkansas Derby after a Fair Grounds allowance victory.

Adaline Julia ($6.40) in the fourth race notched her second victory of the season and trainer Robertino Diodoro's 300th at Oaklawn. Then becoming the first trainer at the meeting to top $1 million in purse earnings, Diodoro added his 301st Oaklawn victory, and 3,015th in North America, when Totalizer ($7.60) took Saturday's seventh race. Oaklawn's 2020 training champion with 51 victories, the Canadian leads the local standings with 22 wins from 65 starts after the first quarter (17 days) of the scheduled 68-day meeting.