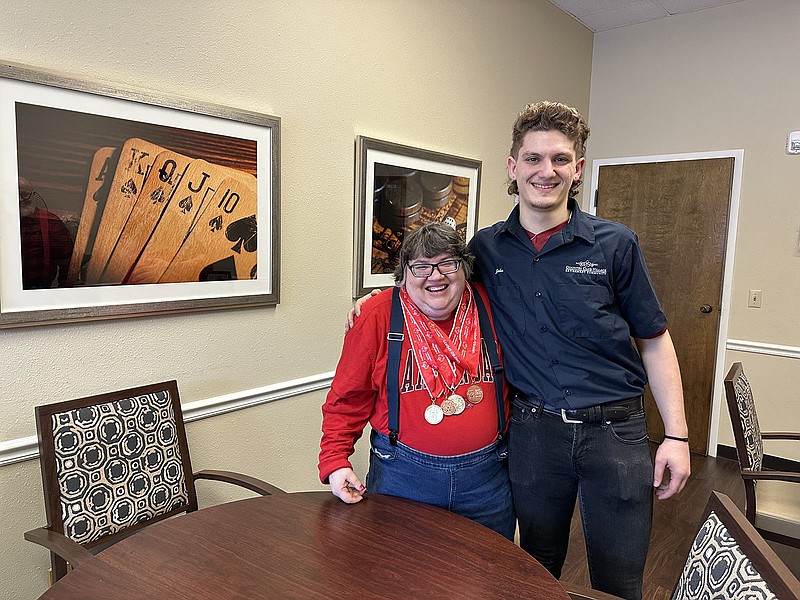 When Erin Brooks had a stroke just before she was born, the doctors said she would never walk or talk in her life.

When Erin Brooks was in elementary school, one of her teachers started her in bowling. Since then, she has never looked back on the sport she now loves.

"Back then, they closed off the gutters and you had these little things you could push the ball down and it'd roll down and hit the pins," her father said. "She's kind of been at it ever since then. She's just kind of liked to do that. Special Olympics has given her a platform to do that on."

Her story caught the attention of John Longinotti, and Longinotti has been a big supporter of Erin Brooks' bowling since they met.

Longinotti works on the maintenance team at Country Club Village Retirement Community where the Special Olympic standout lives with her father.

"They moved in and it just kind of clicked since they've moved in," Longinotti said. "Just since I've been here we just became friends and talked more and more about it."

When Longinotti walked into the room and greeted her Friday, Erin Brooks was filled with excitement.

Erin Brooks does more than just bowl. Defying what the doctors said at her birth, she also works at Abilities Unlimited and participates in plenty of other activities.

"Over the years she's told the doctors they are crazy," Jerry Brooks said. "She walks, she talks, she roller skates, she bowls. She does all those kinds of things. Me and the wife encouraged her every step of the way. If she wanted to try it, try it. She's done well."

She captured her gold medal in 2019 and won silver in 2021 before earning bronze this past year.

"The first year there, the gold one, she won as an individual," her father said. "Then the COVID thing hit and they couldn't do anything. The next year after that she had to bowl as a team and she won the silver. This last year she bowled a mixed guy-girl situation and that's where the bronze came from."

Longinotti happened to miss his friend's recent bowling performance in person, but he got to see some of her bowling on video. He looks forward to seeing her win medals in person in the future.

"More medals," Longinotti said, "and hopefully gold ones in the future that I can go see her get."

Erin Brooks already proved the doctors wrong, and she will continue to impress with her bowling skills for years to come.