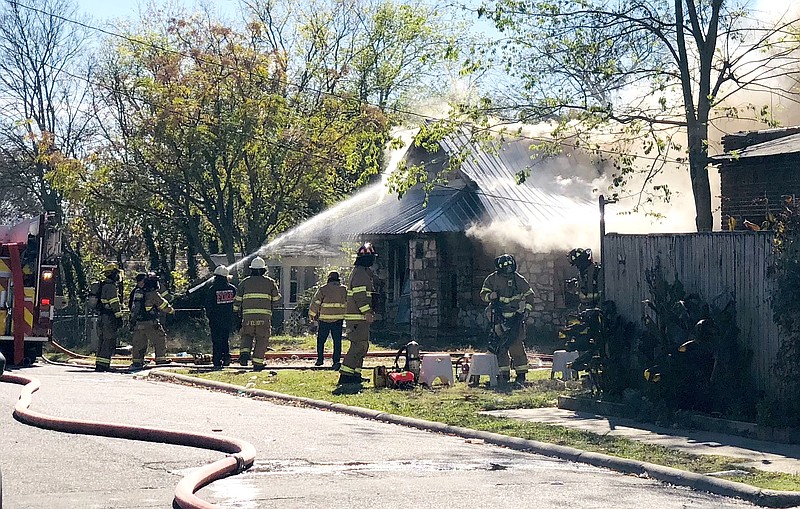 The Hot Springs Fire Department works a structure fire in the 600 block of School Street on Nov. 13, 2022. - File photo by The Sentinel-Record

The Hot Springs Civil Service Commission authorized the fire department to use a new written exam for applicants last week.

Police Chief Chris Chapmond told the commission the state Association of Chiefs of Police endorsed the company as the model for police and first responder testing.

Davis told the commission the new test will allow the fire department to cast a wider net for applicants.

"We find it's going to be a pretty decent instrument for the fact it really emphasizes listening skills," he said.

"We think that will help a lot of people, maybe folks that weren't quite as academically gifted when they were in school.

"I think this might help to even the playing field for some people. We also feel like it fits the culture of the fire service really well, because it does emphasize listening skills. That's a really important component of the job," Davis said.

Davis included the following items in his monthly report to the commission:

"We turned off a lot of systems and saved a lot of damage," Davis said.

About 14 million gallons is the average daily production for December, he said.

"I'm just so proud of the job they do on the suppression operations," he said.

Davis has said a new station south of the King Expressway would shorten responses in Lake Hamilton-adjacent areas the city board annexed in 2016 and 2018. He presented a plan for the new station in November to the committee Burrough appointed to prioritize the city's unfunded capital projects. The committee is expected to make a recommendation to the board later this year.

• Davis said the new tilled aerial device the department showed off at City Hall earlier this month will go into service in February.

Firefighters have been training on the $2 million, 107-foot truck manufactured by Pierce Fire Apparatus of Wisconsin. Davis said it flows water at a faster rate than the 1990s model it's replacing.

"We set it up yesterday, and it easily flowed 1,200 gallons per minute," he said. "It's amazing the amount of water coming out the other end of it. It's a deluge. The current truck flows about 950.

"It's a beautiful piece of equipment. It rides much better than the '95 truck. It articulates faster. It sets up faster and certainly is a more stable platform."