Poland to ask for more tanks for Kyiv, will seek German OK 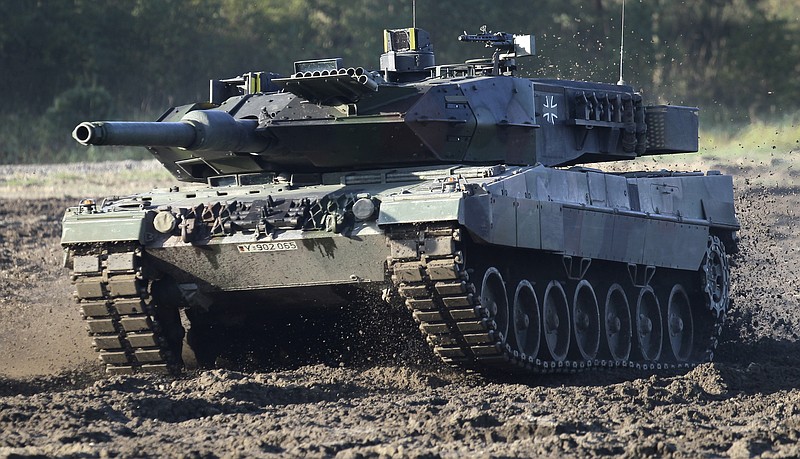 FILE - A Leopard 2 tank is pictured during a demonstration event held for the media by the German Bundeswehr in Munster near Hannover, Germany, Wednesday, Sept. 28, 2011. Poland will apply to the German government for permission to supply the German-made Leopard battle tanks to Ukraine. (AP Photo/Michael Sohn, File)

Polish Prime Minister Mateusz Morawiecki didn't specify when the request to Germany will be made. He said that Poland is building a coalition of nations ready to send Leopard 2 battle tanks to Ukraine.

Poland needs the consent of Germany, which builds the tanks, to send them to a non-NATO country.

But even if Germany doesn't grant permission, Warsaw will make its own decisions, Morawiecki said at a news conference.

Ukraine says tanks -- and especially the Leopards -- are vital to its war effort. Both sides' battlefield positions are mostly deadlocked during winter, with new ground offensives expected in the spring. Russia's forces are much larger than Ukraine's, so Kyiv wants to gain an advantage in weaponry and fuller backing from its Western allies.

Poland has become a leading advocate in the European Union for giving military aid to help Ukraine prevail 11 months after the Kremlin's forces invaded. Germany's hesitation has drawn criticism, particularly from Poland and the Baltic countries on NATO's eastern flank that feel especially threatened by Russia.

Although Berlin has provided substantial aid, it has been criticized for dragging its feet on providing military hardware.

German government spokesman Steffen Hebestreit said it was important for Germany not to take a "reckless" step it might regret, adding that a decision will not be rushed.

"These are hard questions of life and death," he added. "We have to ask what this means for the defense of our own country."

Pressed on how long a decision on sending tanks might take, Hebestreit said: "I assume that it's not a question of months now."

Previously, Polish officials have indicated that Finland and Denmark were ready to join Warsaw in sending Leopards to Ukraine. The United Kingdom has pledged to send Challenger tanks. French President Emmanuel Macron said Sunday he asked his defense minister to "work on" the possibility of sending Leclerc battle tanks to Ukraine.

But Macron said a decision hinged on three criteria that have also weighed on the minds of other Western leaders: that sharing the equipment doesn't lead to an escalation of the conflict; that it would provide efficient and workable help when training time is taken into account; and that it wouldn't weaken his own military.

Morawiecki said that while Poland intends to ask Germany for permission to send Leopard tanks to Ukraine, the request is "a secondary matter" as a group of EU countries look at how to help Kyiv.

"Naturally, these are not easy talks, but we will be taking efforts to break this barrier of unwillingness in various countries," he said.

Baerbock, Germany's top diplomat, told French television channel LCI on Sunday that Poland hasn't formally asked for Berlin's approval to share some of its Leopards, but added "if we were asked, we would not stand in the way."

Regarding Baerbock's comments, Morawiecki said that "exerting pressure makes sense" and that her words are a "spark of hope" that Germany may even take part in the coalition.

According to Morawiecki, Germany has "more than 350 active Leopards and about 200 in storage."

Poland wants to send a company of Leopard tanks, which means 14 of them, but they would barely make an impression in a war that involves thousands of tanks. If other countries contribute, Warsaw reckons, the tank detachment could grow to a brigade size.

Berlin has shown caution at each step of increasing its aid to Ukraine, a hesitancy seen as rooted in its history and political culture.

Ukraine's supporters pledged billions of dollars in military aid to Kyiv at a meeting Friday at Ramstein Air Base in Germany. International defense leaders discussed Ukraine's urgent request for the Leopard 2 tanks, and the absence of an agreement overshadowed new military commitments.

In Brussels, EU foreign ministers gave the green light Monday to a further 500 million euro ($543 million) package of military support for Ukraine, as well as funds to help pay for a training mission for the bloc has set up for the country's troops.

The money would be used to reimburse EU countries for weapons and ammunition they supply Ukraine. Another 45 million euros ($49 million) will pay for the 27-nation bloc's military training mission this year.

It brings the total amount of money provided to Ukraine from the EU fund to about 3.6 billion euros.

Moscow, in response to the pledges of sophisticated Western weapons for Kyiv's military, has stepped up its warnings that escalation risks catastrophe.

"We have said on numerous occasions that escalation is the most dangerous path, and the consequences may be unpredictable," Russian Deputy Foreign Minister Sergei Ryabkov said. "Our signals are not listened to, and Russia's adversaries keep raising the stakes."

The Kremlin's forces have kept up their bombardments of Ukrainian areas.

Neither side shows signs of backing down as the war heads for a second year.

The Kremlin appears to be keeping its options open on mobilizing more soldiers. Russian authorities declared that the mobilization of an additional 300,000 reservists in late October is complete. However, some Russian lawyers and rights groups pointed out that Russian President Vladimir Putin's mobilization decree remains in effect until another presidential decree is issued to formally end the action.

Peskov said Monday although the assigned number of reservists have been mobilized, the decree remains in force because it also includes "other measures needed to ensure the fulfillment of tasks by the military." He didn't elaborate.

Follow the AP's coverage of the war at https://apnews.com/hub/russia-ukraine 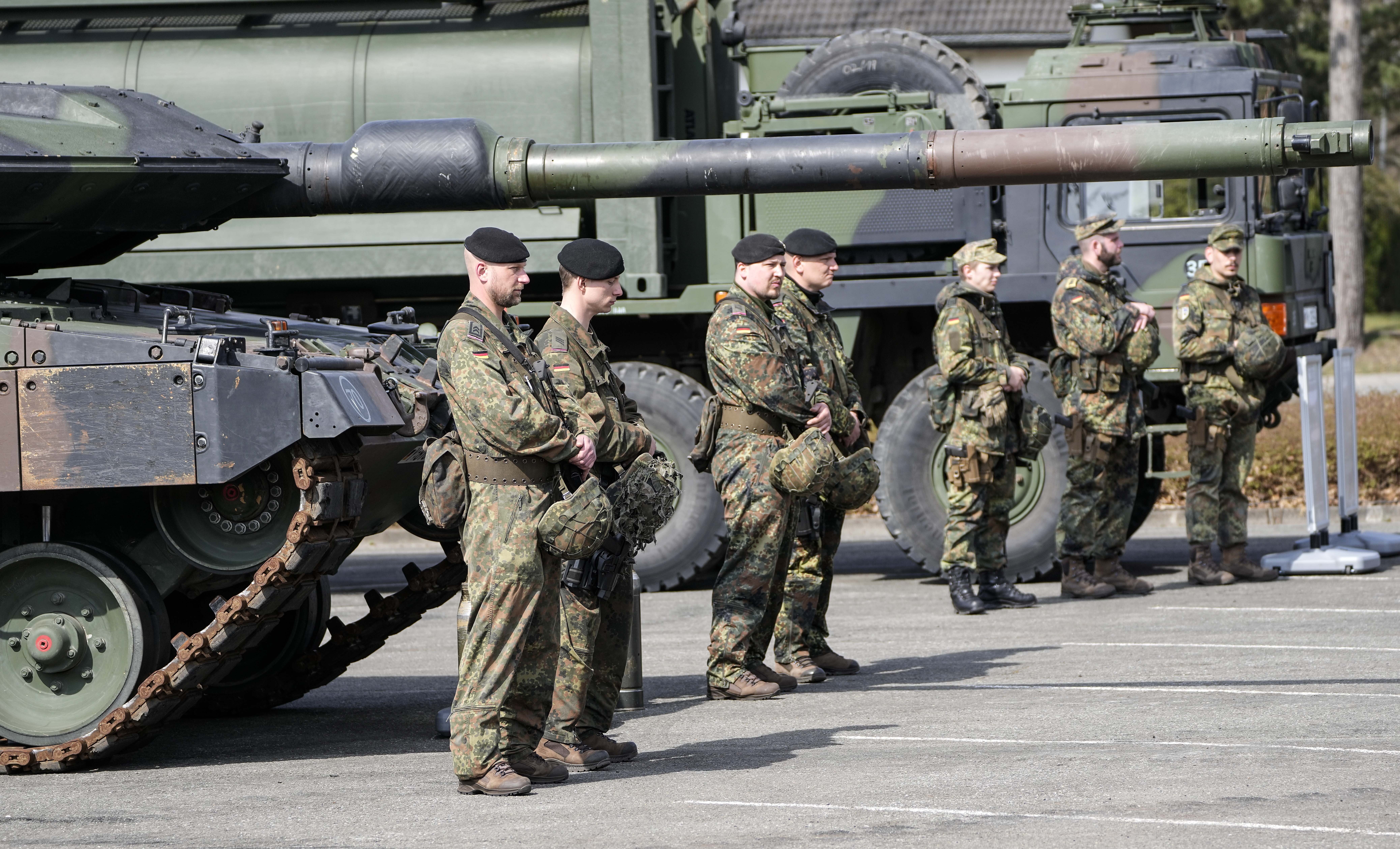 FILE -German soldiers stand at a Leopard tank during a visit of Governor Hendrick Wuest at the army base Field Marshal Rommel Barracks in Augustdorf, Germany, Wednesday, March 30, 2022. Poland will apply to the German government for permission to supply the German-made Leopard battle tanks to Ukraine. (AP Photo/Martin Meissner, File)

FILE --A Leopard 2 tank is pictured during a demonstration event held for the media by the German Bundeswehr in Munster near Hannover, Germany, Wednesday, Sept. 28, 2011. Poland will apply to the German government for permission to supply the German-made Leopard battle tanks to Ukraine. (AP Photo/Michael Sohn, File) 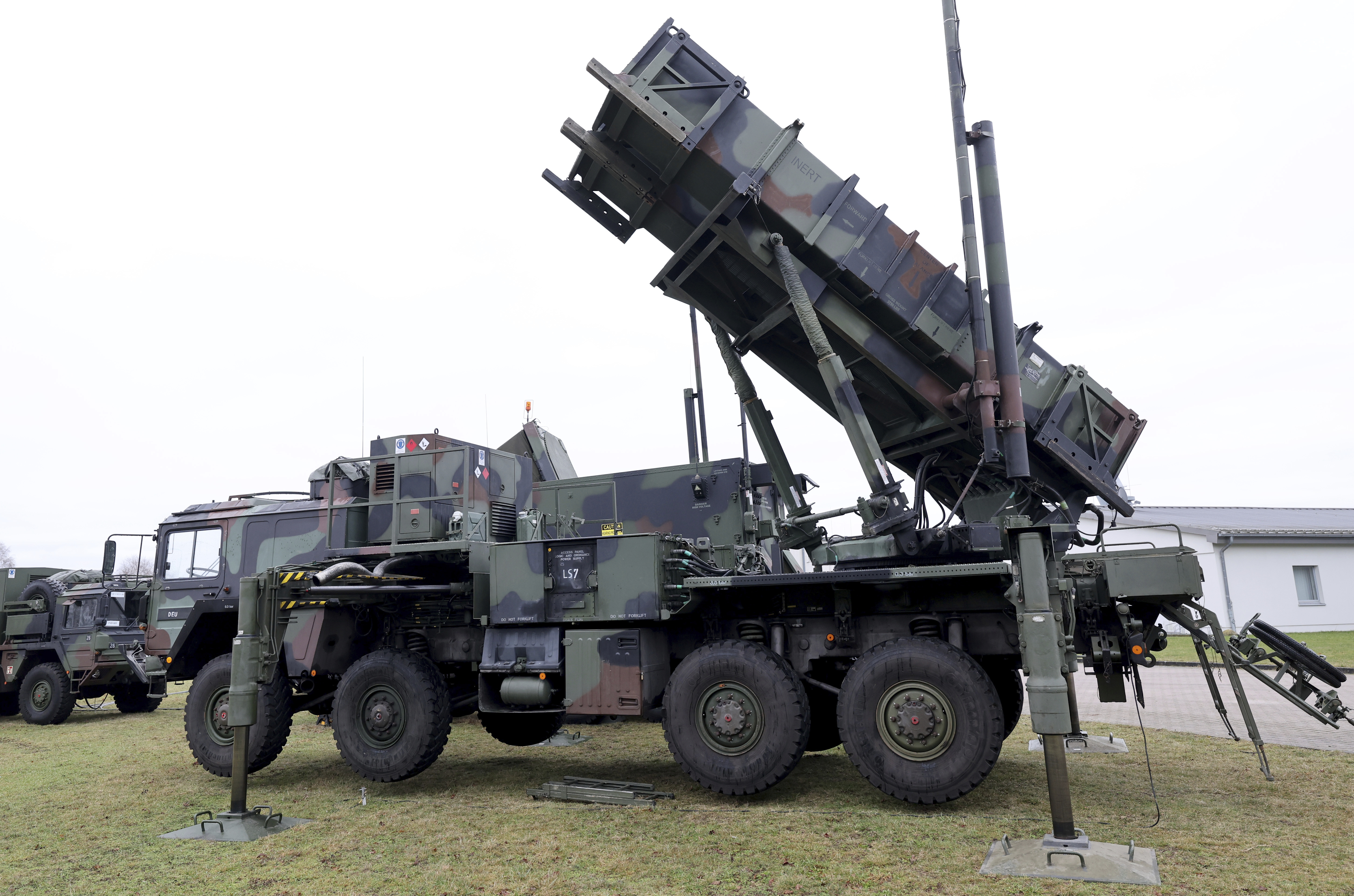 A Patriot system launcher is unveiled at a press event hosted by Air Defense Missile Group 24 ahead of the transfer of the first two of three committed Patriot air defense missile squadrons from Germany to Poland in Gnoien, Germany, Monday, Jan. 23, 2023. (Bernd Wuestneck/dpa via AP) 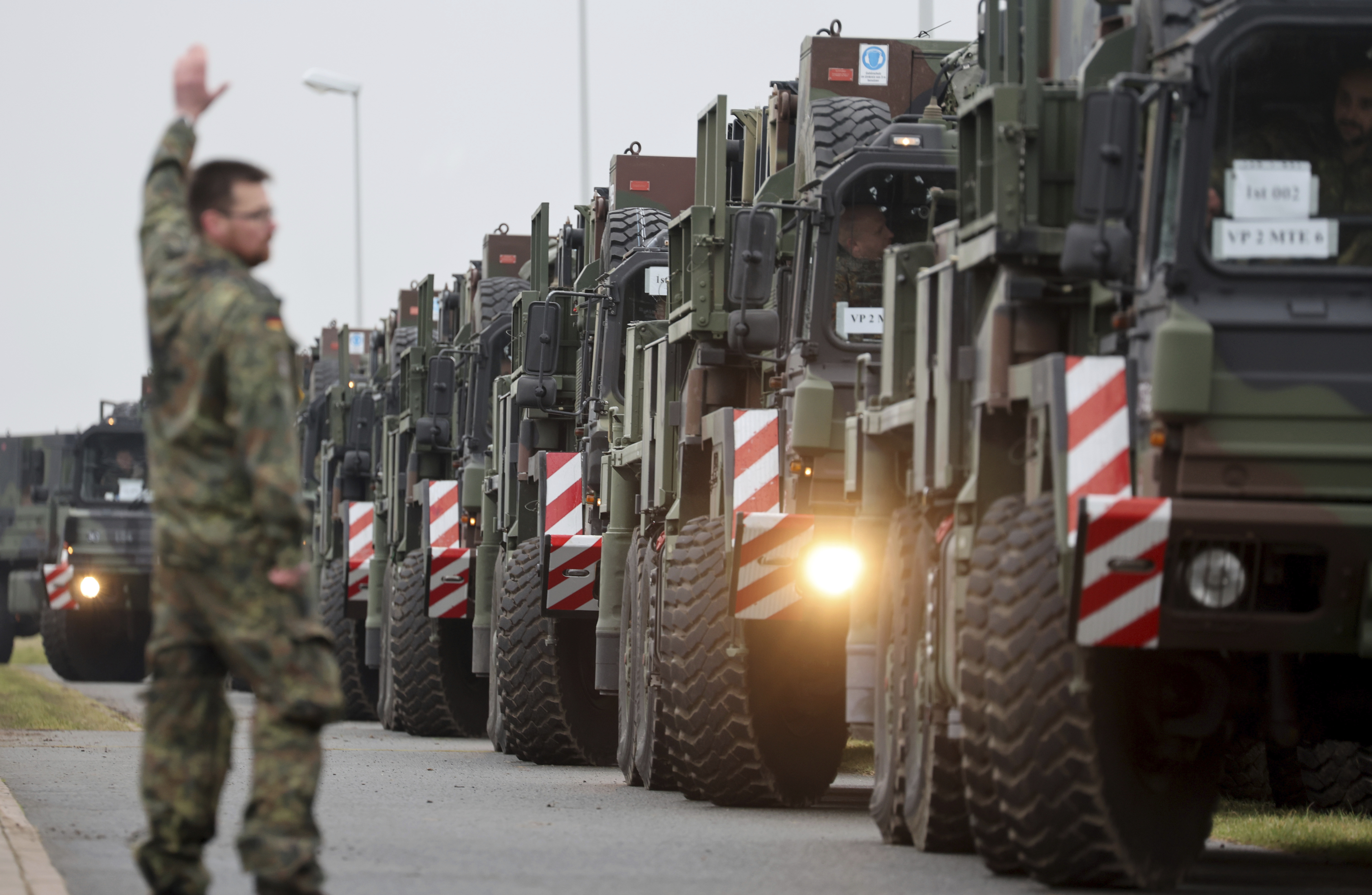 Air Defense Missile Group 24 begins moving the first two of three committed Patriot air defense missile squadrons from Germany to Poland in Gnoien, Germany, Monday, Jan. 23, 2023. The air defense systems are to move into operational positions in the vicinity of the town of Zamosc in southeastern Poland. (Bernd Wüstneck/dpa via AP) 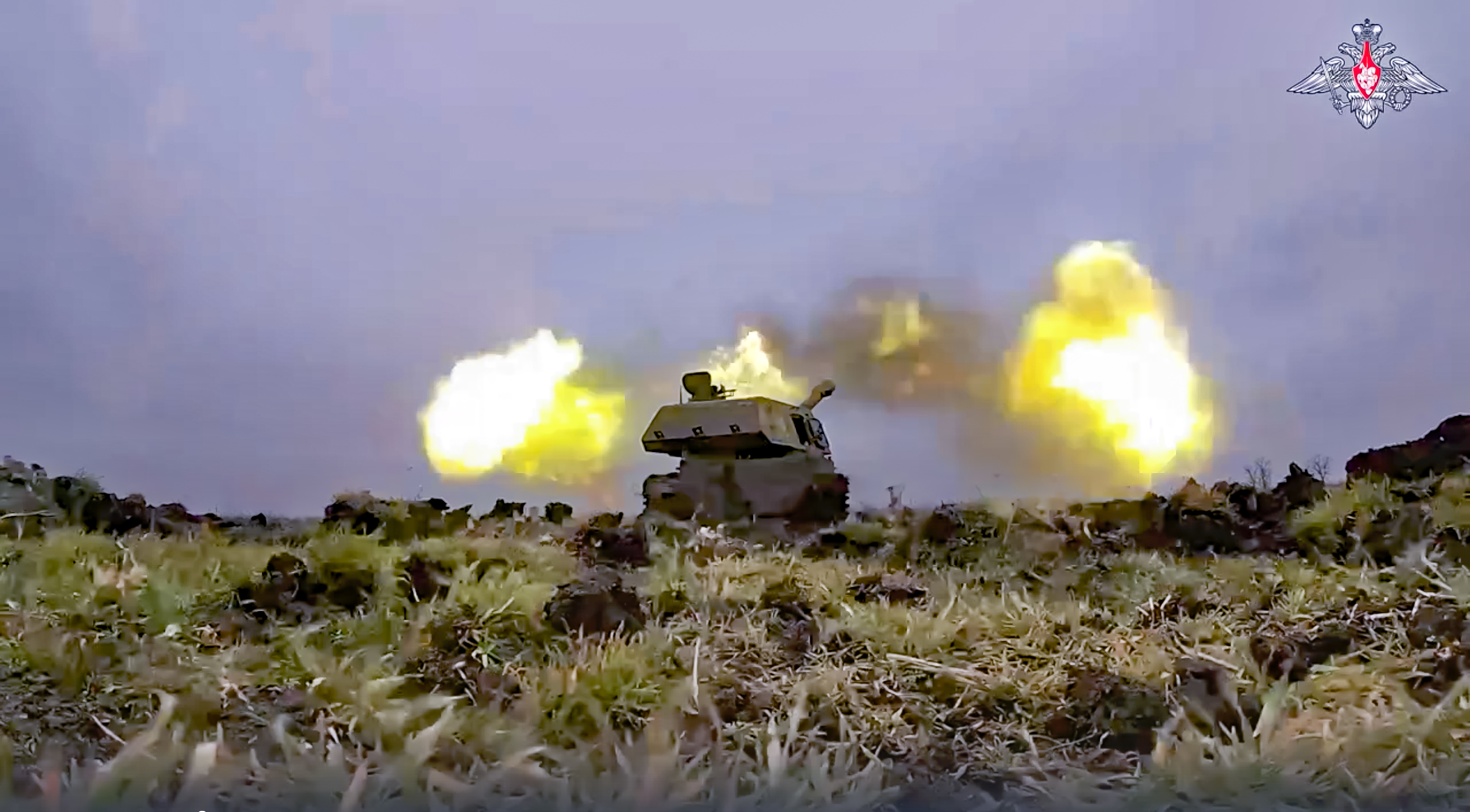 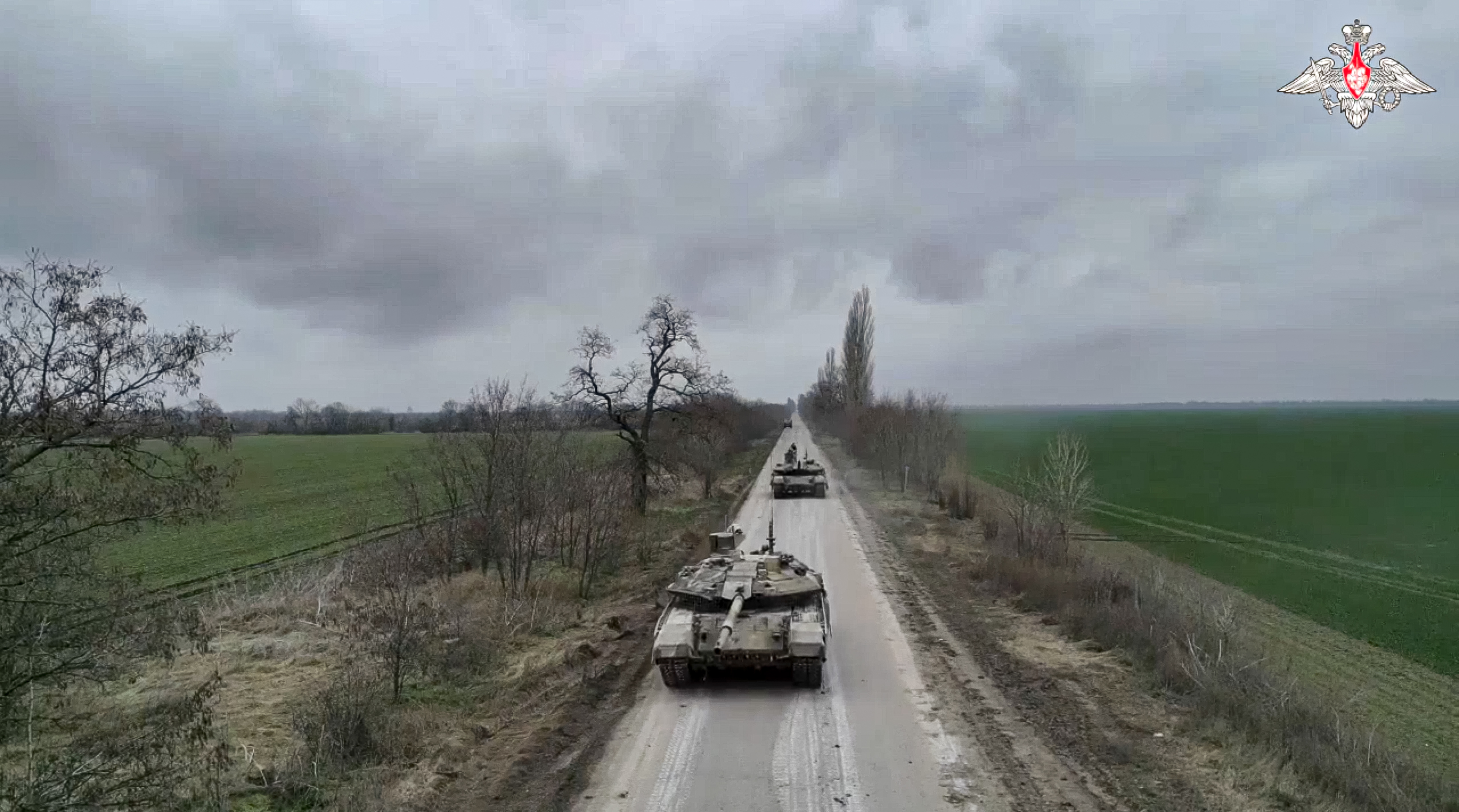 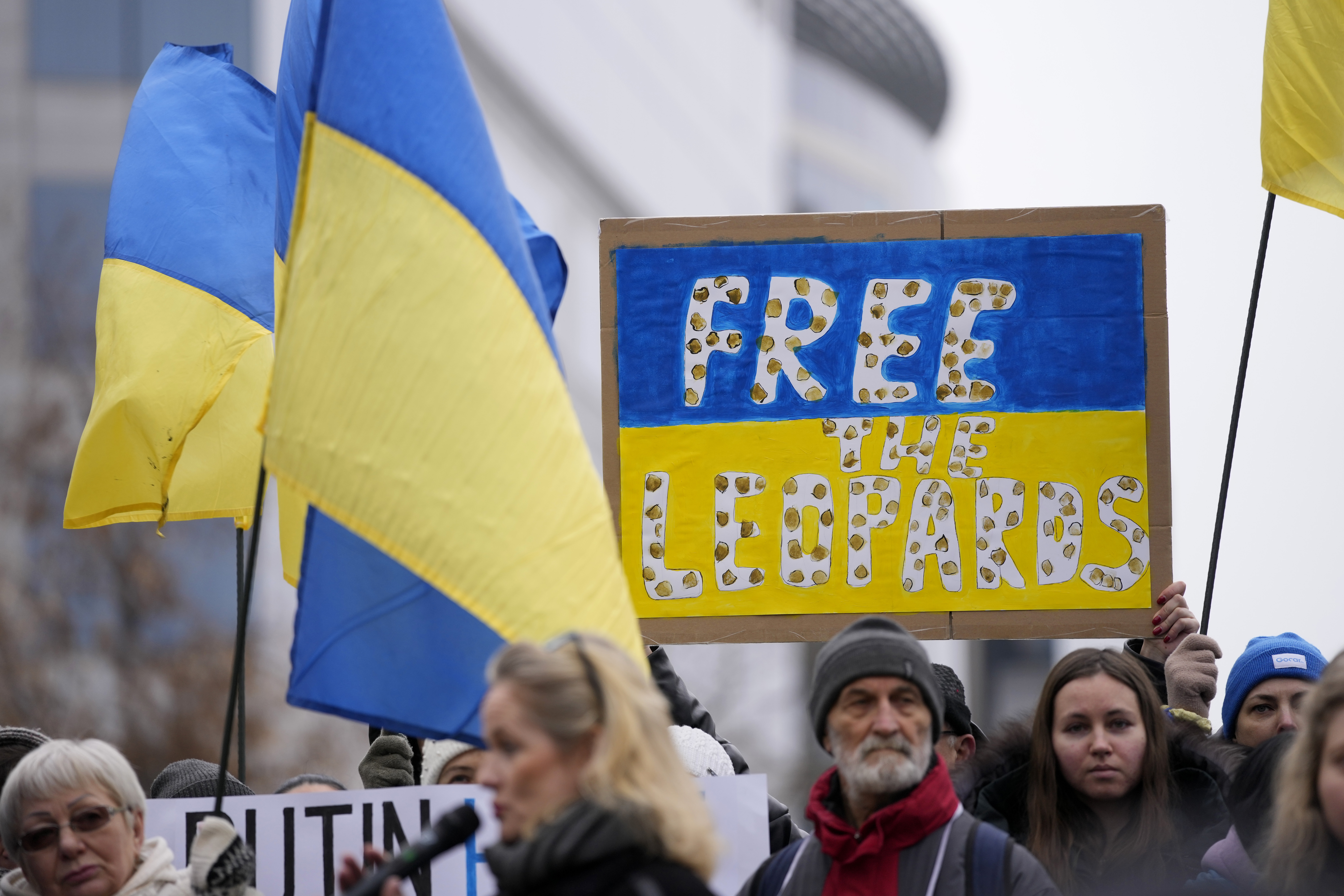 Protestors hold signs and wave Ukrainian flags during a demonstration in support of Ukraine outside of an EU foreign ministers meeting at the European Council building in Brussels on Monday, Jan. 23, 2023. (AP Photo/Virginia Mayo)