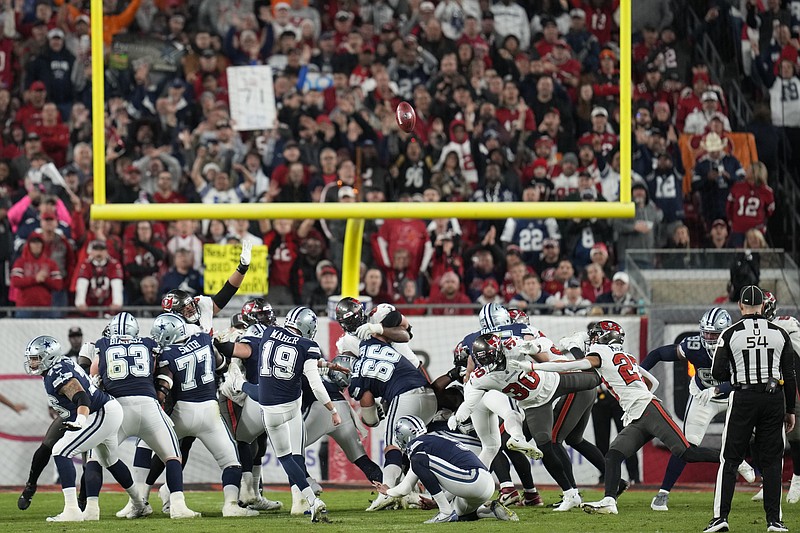 Dallas Cowboys place kicker Brett Maher (19) misses a fourth extra point against the Tampa Bay Buccaneers during the second half of a wild-card game Monday in Tampa, Fla. - Photo by John Raoux of The Associated Press

It's at times like these that the Dallas Cowboys think that term limits might be the team's biggest problem.

Like U.S. presidents to two terms in the White House, perhaps that is what's holding back Jerry Jones' football team. He won the Lombardi Trophy three times in four years soon after buying the club. It can be said Jones left a record third straight NFL crown on the table in 1994 when he and coach Jimmy Johnson couldn't resolves their differences and take one for the team.

After opening the mint for Deion Sanders, Jones got that third title (the fifth in franchise history) in 1996 with Barry Switzer. Until Dak Prescott or a quarterback to be named later identifies himself, that may be Jerry's lasting legacy for those too young to remember when he fired Tom Landry as coach.

A 19-12 road loss Sunday to San Francisco in the divisional round of the playoffs did nothing to take the heat off Prescott, the seventh-round quarterback out of Mississippi State. As he did with Tony Romo, Jones pays Prescott to win championships, extending Dak's contract in 2021 for $160 million with $126 million guaranteed. Original owner Clint Murchison expected no less of Don Meredith, who succeeded Eddie LeBaron as the team's first marquee quarterback.

The truth is that Dallas has world championships in basketball (Mavericks) and hockey (Stars) since Troy Aikman claimed his third Lombardi Trophy as starting quarterback after the 1995 season. The Rangers played for the World Series in back-to-back years, the second (2011 against the Cardinals) too painful for most Texas fans to recall.

Freshly turned 80 in October, Jones is still front and center even as things around him are getting late. Championships or not, he is owner, president and general manager of arguably professional sports' Neiman-Marcus store (this is Dallas, after all), unless one still wants to rank the New York Yankees ahead.

An Arkansas oilman who went all in when he bought the Cowboys and other properties for $140 million in 1989, Jones is a member of the Pro Football Hall of Fame and, like the late Al Davis, one whose opinion counts in what is now NFL commissioner Roger Goodell's ivory palace in New York. Earlier, Jerry took chances, usually which paid off, in amassing the fortune with natural gas that brought him enough capital to join the macho men who own professional sports teams.

Long since bigger than the club he owns, Jones is often quoted before any player after a Cowboy game. That is a divine right of kings that not every NFL owner exercises. If not patrolling the sidelines as much as in past years, Jones and his entourage of family members and business associates are pictured in a suite at Cowboys games. They got frequent face time a week ago when Dallas, previously 0-7 against Tom Brady, whipped Tampa Bay in a wild-card playoff game.

On that night, Prescott passed for four touchdowns and ran for another. Brady then wasn't the greatest quarterback on the field much less of all time. San Francisco beat Seattle before playing the Cowboys at home, going off favored by 3 1/2 points or so – and not with a $160M quarterback but Brock Purdy, last player named in the 2022 NFL draft and hence tagged as "Mr. Irrelevant."

After four missed conversions against Tampa Bay, Brett Maher missed another at home Sunday that would have given Dallas a 7-6 edge in the second quarter.

Prescott threw for a touchdown but was picked off twice. The Cowboys got 206 yards from No. 4, who completed 23 of 37 passes, but needed more with their ground game held to 26 yards.

Former pro player Maurice Jones-Drew, summing it up for the NFL Network, said simply, "Dak needs more help." Christian McCaffrey scored the only San Francisco touchdown from eight yards in the fourth quarter for a 16-9 SF lead, and the 49er defense maintained constant pressure against Prescott.

This is the year that Philadelphia went past Dallas as NFC East champion and a third team from the division made the playoffs. The way that the Eagles roughed up the New York Giants Saturday night, one finds no reason to believe that the Cowboys would have fared any better in the NFC Championship Sunday. Or in the Super Bowl against Cincinnati or Kansas City, those two playing again for the AFC title, the Bengals winning on the road last year before losing to the Los Angeles Rams in the latter's SoFi Stadium.

Underneath the star on the helmet, a sense of entitlement seems to follow the Cowboys. If two-time Super Bowl winner Bill Parcells could not last long with Jones in Dallas, what chance does Mike McCarthy, though a Super Bowl winner in Green Bay, have? Sean Payton, a SB winner in New Orleans, is being mentioned for several jobs but not in Dallas while McCarthy's club was playing. Will the team's latest defeat goad Jones into action?

"Wait until next year," which one first heard about the Cowboys when the team played in the Cotton Bowl in the 1960s, is still heard in Dallas -- not so much by coaches, though. Wonder if Barry Switzer, all of 85, wants to "start fresh" with his Razorback buddy Jones?