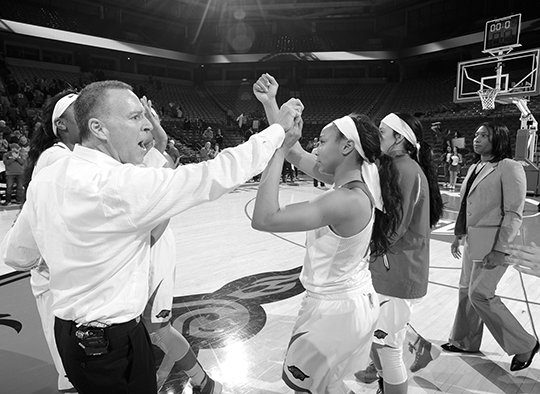 Covering for this newspaper what was then Lady Razorback basketball once was a reward for a number of reasons.

First, the boss cared. Melinda Gassaway, then executive editor of the hometown newspaper, was an avid sports fan, showing a keen interest in women's basketball. If she had it do over, she might have become a sportswriter, and a good one. Thanks, again, Melinda, for letting me read your sports copy first and although we didn't always agree, your points were well taken. (And, regarding movies, you're right about "To Kill a Mockingbird," Harper Lee's first and greatest novel and with a movie performance for the ages, playing Atticus Finch, by Oscar winner Gregory Peck.)

Melinda's presence opened doors to Lady Razorback insiders such as former athletic director Bev Lewis (and husband Harley) and a number of UA coaches and aides. The dear former Amber Nicholas (Shirey) has been around campus long as the Boston Mountains. Chats with another former UA player, Karen Jones, were always rewarding.

Ah, the coaches, starting way back with Matilda Willis and carrying on to John Sutherland, finally to Gary Blair.

Blair, newly arrived from Stephen F. Austin in 1993, gave wife Sue and I a tour of spanking-new Walton Arena. Gary's sendoff message has stuck with me 30 years later: Referring to the late Pat Summitt at Tennessee, he said, "We've got to fill our big house like she does."

Arkansas may never do that in women's basketball but a Tuesday-night crowd of 14,161 at Walton Arena (a tournament record) carried the Lady'Backs to their second WNIT crown in 1999. Melinda covered the finals in Amarillo, Texas, when Arkansas won its first such title. I covered the second on an electric a night as UA women's basketball has produced outside the NCAAs. Blair was on his way to the NCAA women's Final Four in California and thus informed everyone, "I'll be teeing off Thursday morning at Pebble Beach."

Arkansas made the Final Four in 1998 under Blair, getting a giant boost when underdog Hawaii stunned top seed and host Stanford in the first round of the West Regional. Arkansas played so many games at late hours back home that Blair called his bunch, "Good Morning America's Team."

One can't imagine any of Blair's successors being quite so witty.

Blair left for Texas A&M after the 2003 season at Arkansas, the Aggies showing more interest (financial, to boot) in a then-invisible program than the Lady'Back coach seemed to hear from his superiors. The finger-pointing one remembers from the Blair years came after A&M's surprise NCAA championship. "How could we let a coach like that go?"

Shameka Christon was SEC women's player of the year as a senior in 2004, the former Hot Springs High star going on to the WNBA, having blossomed out from the lanky eighth-grader who played at Lake Hamilton. That prize came under Susie Gardner's watch as the first successor to Blair. A nice lady but overmatched in the SEC, though having played for Andy Landers at Georgia, Susie was hung out to dry when Lewis, still women's AD when Arkansas had separate athletic programs per gender, would not come up with the extra cash to keep a WNIT game in Fayetteville.

Arkansas State, seeing a chance to grill Frank Broyles, put up the money and gave Gardner's team a thorough thrashing in Jonesboro. "Half the people were there to cheer for ASU," said former co-worker Dudley Dawson, who covered the game, "and the other half to roast coach Broyles."

A year or so later, after a Rotary Club meeting downtown, I informed Lewis of what I termed an oversight of the highest degree. "You're losing the state of Arkansas in recruiting," I told Bev, to whom one did not take offense easily, smiling through my diatribe.

Tom Collen, a former Blair aide, later replaced Gardner but was unable to recapture the sideline magic that distinguished his past Colorado State and Louisville teams. By then, Arkansas' athletic departments were under one roof with Jeff Long the head man. Long, whose Razorback career set in motion forces (after his firing) that resulted in Chad Morris' nightmarish two years in football, fired Collen in March 2014. That move was no shock but Long could have combed the Fayetteville phone book (maybe he did) and not come up with a more off-the-wall choice than ex-Razorback (men's) player and coach Jimmy Dykes. Then and now, Jimmy, who knows his basketball, looks better behind an ESPN microphone.

One of Dykes' first moves was keeping tabs on a recruiting pledge by a Conway player. Four years later at Mississippi State, that same player wore out the first Arkansas team of coach Mike Neighbors, who tap-danced around the player's UA departure in the post-game presser like Gregory Hines at his best. That marks the last time I have covered the team, called here the Artists formerly known as Lady Razorbacks since losing the gender designation (hasn't hurt the Tennessee Lady Vols that I can see).

Coaching in his home state, Neighbors had his greatest success with Oklahoma high-schooler Chelsea Dungee in a season that Arkansas beat nationally ranked Baylor (then-coach Kim Mulkey) and Connecticut (Geno Auriemma). As ever, Arkansas (which Tennessee crushed in the 1998 Final Four in Kansas City), could not consolidate its gains, ending its season with a loss to Wright State.

The current Artists come off a 92-46 road loss to No. 1 South Carolina, even if Dawn Staley's defending national champions can do that to a good many teams. Especially when, like the Razorbacks Sunday, Team B is outrebounded 76-17.

That should do wonders for attendance at Walton Arena. Next up are home games with Alabama on Thursday and Ole Miss on Sunday: Good seats, need we say it, are available. Neighbors might ask people in the crowd for rebounding tips.