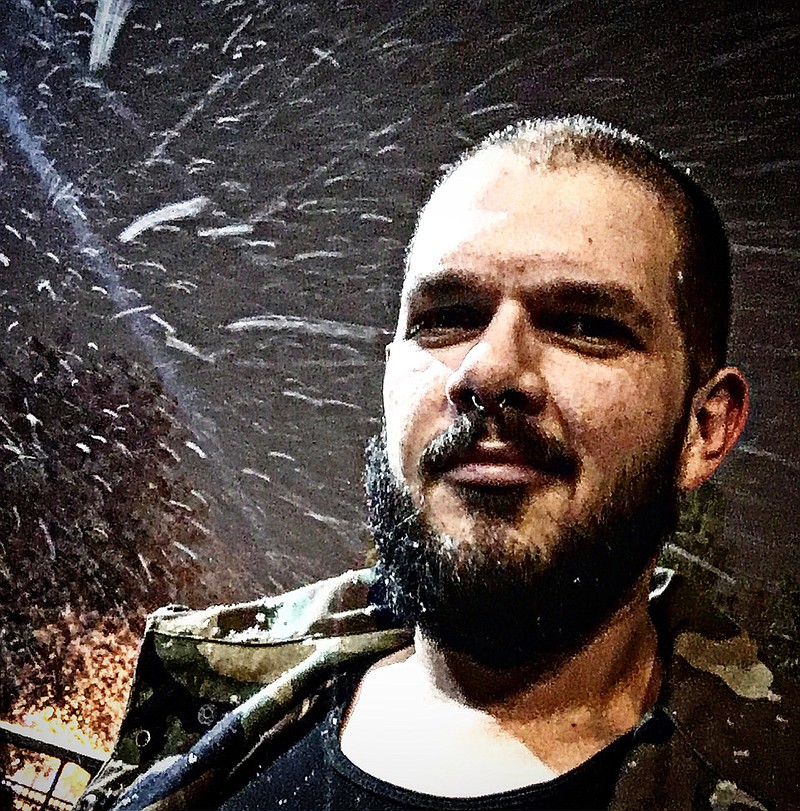 Justin Stubie Smith is shown in a self-portrait. Photo is courtesy of Smith, via Wednesday Night Poetry. - Submitted photo

The regular open mic session for all poets, musicians, storytellers will begin at 6:30 p.m. today. Smith will begin his feature set at 7:30 p.m., followed by another round of open mic. Admission is free and open to all ages. Masks are recommended. All are welcome.

Born in Fort Smith, Smith spent most of his life just outside of Pine Bluff, in White Hall.

"I'm the middle child of three brothers," Smith said in a news release. "I'm very close with my mother. My father's alcoholism and suicide deeply impacted me. My romantic life is very complicated, but I'll always be a dreamer and a romantic. Outside of Arkansas, I spent a very formative year out in the southwestern Utah desert during the pandemic. I most recently moved from Arkadelphia, where I was finishing my degree at Henderson State University, to Malvern. I am still in the process of transferring things, but I hope to spend my first night in my new home right after the feature at WNP."

Smith was a communications major at HSU. "I graduated from White Hall High School in 2006. I was in my last semester of college for a degree in mass media/communications when my father killed himself. Both my father and uncle committed suicide, and I've attempted it. I was in a dark place, but learned how to love and forgive myself. I know I'll finish my degree one day. I believe in myself," Smith said.

"I'm very passionate about teaching. My hobbies include slam poetry, hiking, stand-up comedy, and learning about psychology. I've been writing short stories and poetry since I was in the first grade. I started journaling regularly when I turned 9, and as I grew older, it turned into an emotional outlet for me. Writing is important to me. It was my inner light in the darkness," he said.

"I am completing my second book, '(Human) Nature Walks,' which should be available for purchase by February. I self-published my first book, 'Inkspills,' when I was 19 back in 2007.

"I won my first literary award, The Pine Bluff Arts and Science Center Salutes Award, when I was 13 years old in 2001. I have performed at several venues across the state and was recently invited to take stage with the 'New Jersey Poetic Renaissance' a traveling poetry collective, modern-day troubadours. No matter where my poems take me, Wednesday Night Poetry in Hot Springs will always be home," he said.

"I would describe my poetry as a combination of the slam poetry and my journals coming to life. I love alliteration, metaphors, and postmodern slang. I always felt misunderstood up until my thirties. Writing was a way I could share my voice. I write a lot about my battles with alcoholism, suicide, bipolar disorder, and super-morbid obesity," Smith said.

"I also absolutely love incorporating my interactions with nature into my writing. My favorite poets include Robert Frost, Allen Ginsburg, Mike McGee, and WNP poets Tanner Dinger and Acie 'Spades' Vestal," he said.

"This is my redemption story. The day of my feature will be my 450th day sober, and the 10-year anniversary of my dad's suicide falls the weekend before it. In the last three years, I've lost over 250 pounds without surgery. The photo I sent to Kai for this article is extremely special to me. I took it the week I decided to forgive my father and myself. The day before, the weather was in the 70s, and it snowing felt like the universe was forgiving me too. Although I still struggle, I'm finally at some level of peace. This year has been the most rewarding year of my life, and WNP really helped me feel like a part of something beautiful. This place is therapy, church, family, and an endless supply of inspiration and admiration. Words can't express how much I love my WNP family," Smith said.

"Justin is a bright burning flame, a fireball of a poet who takes the audience on visceral and imagist journeys with his precise and powerful poems. He is skilled in literary wordplay, and has the passion to stand beside some of the best slam poets in Arkansas. Trust me, I know them. Justin has something special, a real drive to break free of all that his life has put on his shoulders, and to come out triumphant and brimming with poems. It's going to be an absolutely electric night," WNP Host Kai Coggin said in the release.

"Next week, Feb. 1, is the 34th Anniversary of Wednesday Night Poetry. Please plan to come out and celebrate with us!"