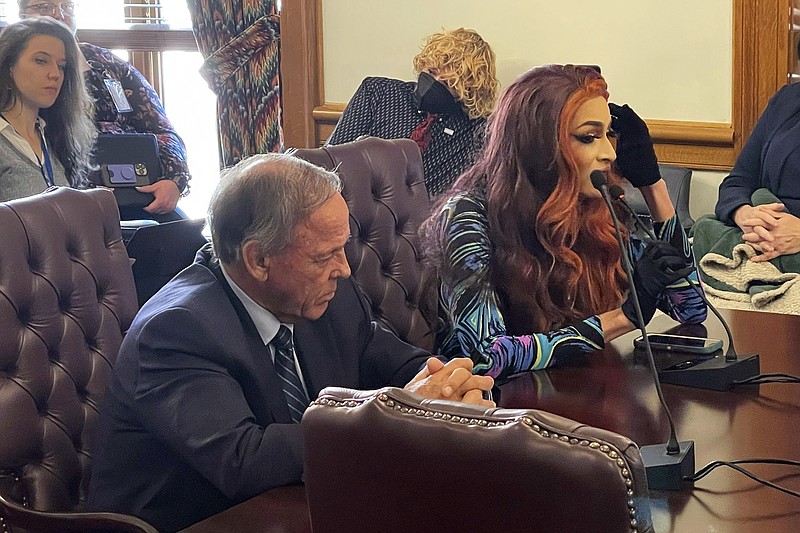 Drag performer MD Hunter, whose stage name is Athena Sinclair, testifies before a state Senate panel as state Sen. Gary Stubblefield, left, listens, at the Arkansas Capitol in Little Rock, Ark., on Thursday, Jan. 19, 2023. The Senate panel endorsed a bill by Stubblefield that would restrict where drag performances can be shown by classifying them as adult oriented businesses. (AP Photo/Andrew DeMillo)

LITTLE ROCK -- The Arkansas Senate on Tuesday approved legislation restricting the locations of drag shows by classifying them the same way as strip clubs and adult theaters, despite criticism that the move was overly broad and discriminates against the LGBTQ community.

The majority-Republican Senate approved the bill on a 29-6 party line vote, with all six of the chamber's Democrats opposing. The measure, which also bans drag shows from taking place on public property, now heads to the majority-Republican House. The bill, if enacted, could make Arkansas the first state to place such restrictions on drag shows as they face increased attention from Republican lawmakers and groups.

"It appears to me you're trying to put a target on people's backs that are not, according to you, normal," Democratic Sen. Stephanie Flowers told the bill's sponsor before the vote.

Drag story hours -- which feature drag queens reading books to children -- and other events featuring drag performers have prompted protests by right-wing activists who see them as harmful to children. So far this year, at least 20 bills to ban or restrict drag shows have been introduced in nine states, according to the American Civil Liberties Union.

"If you need your child to be entertained by a big human in a costume, take them to the circus or something," Republican Sen. Gary Stubblefield, the bill's sponsor, told the Senate before the vote. "To me, this is putting our children in situations that's a violation of their personal boundaries."

The Arkansas proposal would classify places that host drag performances as adult-oriented businesses -- prohibiting them from taking place within 1000 feet (304.8 meters) of churches, schools, parks and libraries.

The bill defines a drag show as someone singing, lip-synching, dancing or performing before an audience of at least two people while exhibiting a gender identity different from their gender at birth. Drag performers are defined under the bill as "using clothing, makeup, or other accessories that are traditionally worn by members of and are meant to exaggerate the gender identity of the performer's opposite sex."

It also defines a drag show as designed to appeal to "prurient" interests, a term that isn't defined in the bill.

Republican Gov. Sarah Huckabee Sanders has not said whether she'd sign the legislation if it reaches her desk. But the former White House press secretary has said she'd support legislation that has been modeled after a Florida law banning instruction on sexual orientation and gender identity in kindergarten through the third grade. Critics have dubbed that measure the "Don't Say Gay" law and said the ban marginalizes LGBTQ people.

"Governor Sanders believes we need to be protecting and educating kids, not indoctrinating them," Alexa Henning, a spokeswoman for Sanders, said when asked about the bill. "It's time to get back to letting kids be kids again."

Critics say the bill is so broadly worded that it would apply to people in their own homes, especially transgender people. They've also questioned whether the restrictions would apply to theatrical performances where actors or actresses portray someone of the opposite sex.

The bill has concerned Northwest Arkansas Equality, which organizes the state's largest pride parade and festival in Fayetteville every year. Steve Harrelson, the group's operations manager, said it's unclear whether the bill would go beyond its events and bar people in drag from even attending.

"It builds a community," Harrelson said. "It's not this horrible thing people make it out to be."

One Democratic lawmaker called the restriction unconstitutional, and noted that the state isn't classifying restaurants like Hooters or Twin Peaks -- which feature servers in revealing outfits -- as adult businesses.

"The truth is, this bill is not about governing," Democratic Sen. Clarke Tucker said. "It's about bullying."