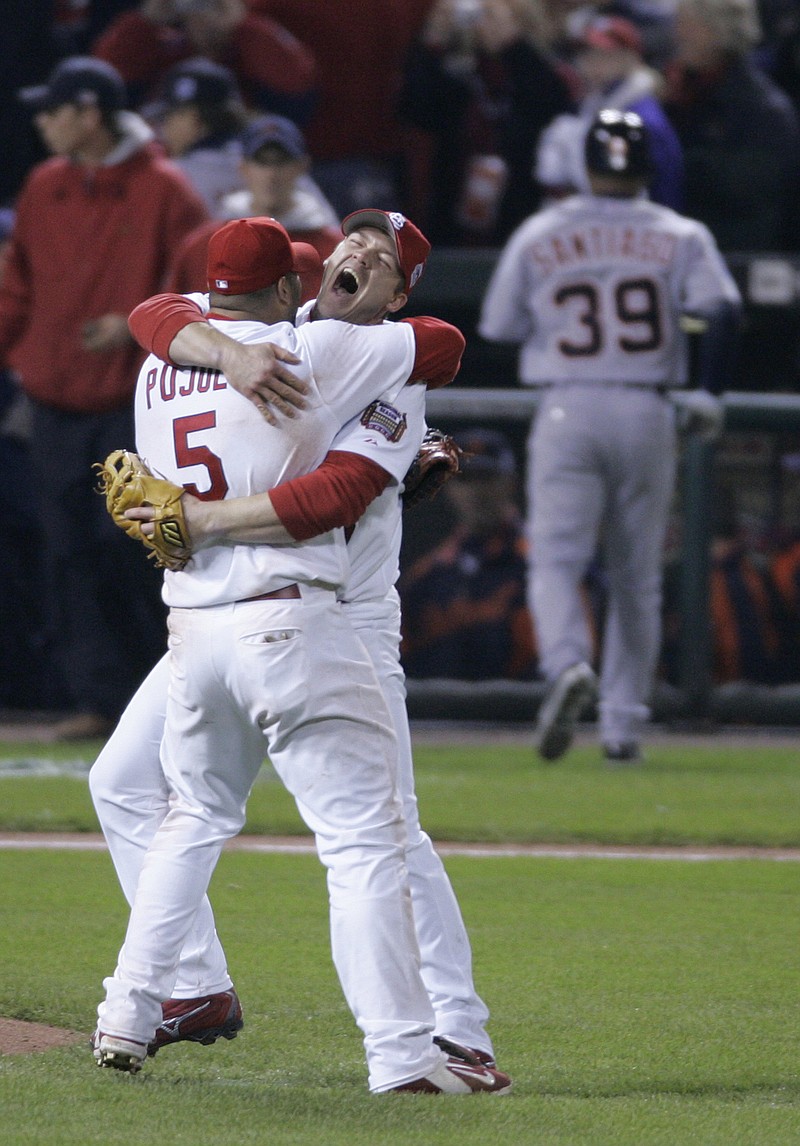 St. Louis Cardinals Scott Rolen and teammate Albert Pujols celebrate in Game 5 of the World Series in St. Louis, Oct. 27, 2006. Rolen could become just the 18th third baseman elected to baseball's Hall of Fame, the fewest of any position. Rolen, Todd Helton and Billy Wagner are the leading contenders in the Baseball Writers' Association of America vote announced Tuesday. - Photo by Tom Gannam of The Associated Press

Last month in San Diego, the Contemporary Era committee of the Baseball Hall of Fame met to consider candidates overlooked by the Baseball Writers' Association of America.

The 16-member committee selected only one player, Fred McGriff. Candidates with fewer than four votes -- including Barry Bonds, Roger Clemens and Rafael Palmeiro -- did not have their totals revealed.

It seemed as if the committee made a statement. McGriff's numbers weren't nearly as impressive as Bonds' or Palmeiro's, but McGriff never was accused of using performance-enhancing drugs.

"Well, when you see the votes that were (received) ..." Ryne Sandberg said, stating the obvious without mentioning names.

Sandberg, a committee member and Hall of Fame second baseman with the Chicago Cubs, said McGriff played the game the way it was meant to be played.

Now the ball is back in the BBWAA's court. The Hall of Fame on Tuesday will reveal the results of voting by BBWAA members, whose ballots were due at the end of 2022. Players must receive 75% of the votes to be elected, and it's possible no one on the writers' ballot will make it this year, potentially leaving McGriff as the only honoree at the July 23 ceremony in Cooperstown, N.Y.

Alex Rodriguez and Manny Ramirez, sluggers who normally would be first-ballot Hall of Famers, have not come close to getting the call thanks to their suspensions for PED use. This year they're joined on the ballot by another alleged cheater in Carlos Beltran, whose methods were much different from the steroids crowd.

Entering the weekend, Todd Helton and Scott Rolen exceeded 75% on known ballots, according to Ryan Thibodaux's Hall of Fame tracker. But those numbers often go down once all the ballots are counted, so it could be "wait until next year" for one or both.

This year's ballot is underwhelming, with first-year candidates Jered Weaver, Andre Ethier, Bronson Arroyo and J.J. Hardy among the players who have received no votes thus far. I enjoyed seeing former Cubs pitcher John Lackey's name on the ballot but couldn't put a check mark by it, even though his Hall of Fame speech probably would become an instant classic.

Helton has steadily risen in the voting in his five years on the ballot and should get in eventually if not this year. Buehrle is a personal favorite who doesn't have a realistic shot, though pitchers who win 200-plus games and make 30 or more starts every season while throwing 200-plus innings are a dying breed. He'll be more appreciated years from now, but by then he'll be off the ballot.

This is my first year voting for Wagner, a borderline call. But closers are not represented fairly in the Hall despite being one of the most important parts of the majority of championship teams, so I joined the pro-Wagner crowd.

Beltran was a difficult choice for obvious reasons. He had Hall of Fame credentials as the best all-around center fielder of his era. But he also was one of the prominent Houston Astros players in the 2017 sign-stealing scandal that rocked the game, which some feel should disqualify him from the Hall.

I've rejected PED-tainted candidates but had a hard time comparing Beltran's cheating to players who altered their bodies through modern medicine.

What the Astros did was clearly wrong, but back in the day, sign stealing was considered an art form that many teams used to get an edge. The White Sox once had a coach named Joe Nossek who was considered one of the best ever at it.

"I got hooked on it," Nossek once said. "A little success makes you want more."

Many teams had someone like Nossek, whether they admitted it or not. How many managers in the Hall of Fame had a coach or player trying to steal signs?

But it wasn't until Steve Jobs changed the world that it went to another level. When modern technology became prevalent in dugouts and clubhouses, using video instead of one's brain to decode signs, that "edge" no longer was winked at.

In 2017, the Boston Red Sox were accused of using an Apple Watch to relay stolen signs in a series with the New York Yankees. Commissioner Rob Manfred ruled the Red Sox violated MLB rules by "sending electronic communications from their video replay room to an athletic trainer in the dugout." Fines were issued and warnings were sent out to all teams.

The Astros ignored those warnings, of course, and the rest is history. Their World Series title will forever be challenged, and Beltran and the rest of the team have been tainted by the episode.

But should that incident deny him entrance to the Hall? Integrity and sportsmanship were no doubt lacking. But right or wrong, Manfred did not penalize any of the Astros players. Should the voters be the ones penalizing Beltran?

There are valid arguments to be made against him, but Beltran got my check mark.

Feel free to disagree. Being told you're wrong is an occupational hazard for a BBWAA voter.