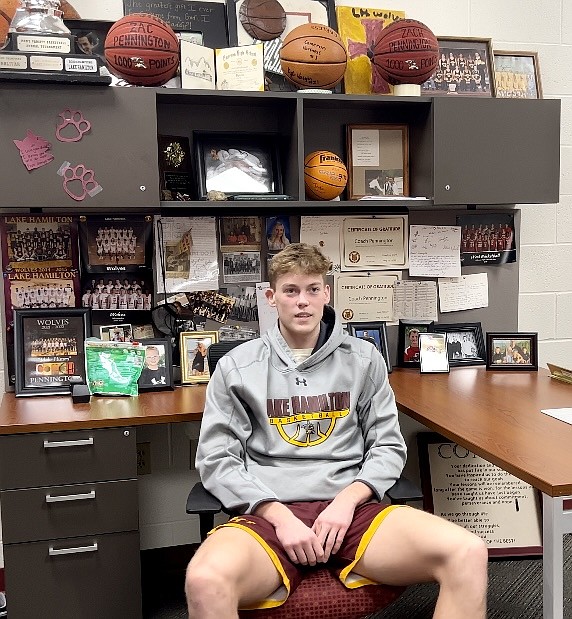 "I feel great ... I went out there and did what I usually do," Ty Robinson said. "Of course, the main goal is not really to score 1,000 it just comes with what we do. The main goal is to win and I had to do what I had to do."

Lake Hamilton head coach Scotty Pennington has had two 1,000-point players in his coaching career and they both play for this year's Wolves team.

"Senior Zac Pennington and Ty this year makes two for me," Pennington said. "He needed eight and he ended up with 27. He is now at 1,018 points. I really had not said anything to him. I told his mom. She is our assistant coach in girls basketball. I told her where he was and that he was probably going to happen. She made sure all the family was there. I had not made any commits to Ty at all."

"I do not know if he was surprised or if he knew or did not know," Pennington said. "If you know Ty he is just Ty, he is going to go play. He does not care about that kind of thing anyway."

In the Wolves' 94-91 overtime win at White Hall Friday, Robinson needed only eight points to surpass the 1,000-point milestone.

"That game was very up and down," Ty Robinson said. "We had a good lead in the third. Then, White Hall went on a run. I was in foul trouble the whole game so it was hard to contribute like I usually do. I was worried about fouling out. It was a fun game to play in and I am glad we ended up winning it."

"Ty is the hardest worker I have ever coached," Pennington said. "To people that know him this is not a surprise for the work that he puts into it. He is in love with the weight room and I mean that literally. We have to keep pour tabs on him to keep him from overuse and overdoing it."

Ty Robinson comes to the basketball gym three days a week from 5:30 a.m. to 7:30 a.m. and shoots basketball on his own to add to what he already has at Wolf basketball practice.

"Robinson is absolutely ate-up with the game," Pennington said. "He eats, sleeps and breathes it. With a kid like that that puts that kind of work and effort into it reaches a milestone it is big."

Robinson is a 4.3 GPA student-athlete, taking advanced placement classes with all A's is how he can go above a 4.0 GPA.

"Juggling all of this is like a girlfriend I guess," Robinson said. "If you love somebody or love what you do, it is easy to find time to do what you do. The main thing is I have loved basketball for so long and it has been crazy."

"For college coaches, Ty is a no-brainier," Pennington said. "It is not whether he go play college ball it is where will he go and what level will he go. He has gotten a lot of interest from small Division I programs, a ton of interest from Division II programs and one major program in Ole Miss."

"I have an offer from SAU," Ty Robinson said. "I have a lot of interests. Ole Miss, Liberty and UCA have texted me. OBU was at the White Hall game and they have texted me. I have another year so I have no clue. I think it will be after summer I will narrow it down."

"College basketball definitely has been a dream of his since we can remember," Dedra Robinson said. "He has been playing ball since he could walk."

"Robinson will be the feature player for AAO Flight out of Fayetteville this summer playing AAU basketball," Pennington said. "The sky is the limit. I really look for him to blow up over the rest of our season, post season and in AAU fallowing that."

"I am really excited this is my second year with AAO Flight," Ty Robinson said. "It is going to be a fun year. We will play a lot in Texas. We play a lot in the surrounding states. The biggest difference for me is the height difference. In AAU you do not see as many football guys, you get more of the taller skilled guards."

"He does not do a lot of outside the gym and school," Dedra Robinson said. "He spends a lot of time working on those two things. It is different and it is rare. He does not have a lot of a social life. He spends all his time in the gym and everything in the books. He works really hard."

"I have known Ty since he was 4 years old," Pennington said. "There is a picture in The Sentinel-Record of Zac and Ty on the bench together during a tournament. They played Optimist ball together. I have known him a long time and this is all I have known Ty to do."

Ty Robinson is an 86% free throw shooter and hits 70% of his in game shots.

"The main thing I love about basketball is the people," Ty Robinson said. "I love basketball in general, but if I had to pick offense or defense of course, it would be offense. I think basketball for me it is just the people I have been around. I do not think I would have as many friendships and know the people that I know without basketball."

"It feels good, he had worked really hard in the gym," Dedra Robinson said. "He and his teammates both spend so much time working on shooting, ball handling and passing. It is nice to see it all come to fruition."

"You knew all along because of his work ethic and how skilled he was," Pennington said. "Hand-eye coordination was always so natural for him. You knew that if he grew and became more athletic he was going to be special."

The Lake Hamilton Wolves (17-2, 7-1 5A South) and sit one game back behind Pine Bluff for first place in the conference.

"I think he is the best shooter that I have ever seen," Pennington said. "He has shot the three ball well. he shoots 40% from the 3-point line, which is great. When he shoots a three literally everyone on our bench thinks it is going in. it does not matter how far or how deep it is. It is like watching Steph Curry at practice. I think he is one of the best shot makers that I have seen."