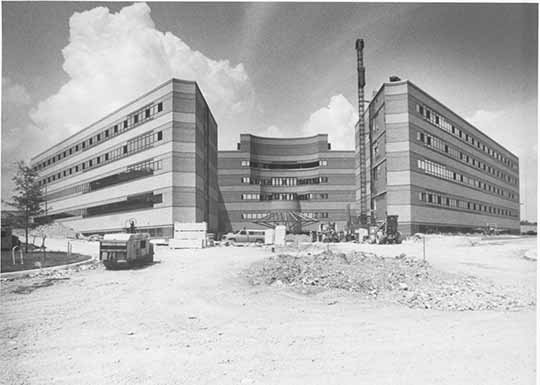 Present and past employees of the former St. Joseph's Regional Health Center recently recalled the day they moved from the historic hospital complex on Whittington Avenue to a new, state-of-the-art facility on Higdon Ferry Road on Dec. 18, 1991.

"It was something that our community really needed. The old facility ... I'm glad they kept it out there and people can continue to see it, but our community needed something new. We needed a bigger facility and a better facility for the change of times. It was a great move for that," said Tamie Finney, retired patient rep coordinator.

Moving hospital operations in the span of a few hours required all staff members, as well as the Arkansas National Guard, so that the transition of patient care was seamless, according to Kila Owens, a media relations specialist with Ghidotti Communications in Little Rock.

At the time, the construction of the new St. Joseph's, and the corresponding Medical Office Building, was the largest nonindustrial construction project in the state, according to Owens.

Last Friday, Ghidotti taped video interviews with hospital employees who experienced the move. Some have retired, but others still work at the hospital, which is now CHI St. Vincent Hot Springs. Portions of the former St. Joseph's building now house the Arkansas School for Mathematics, Sciences, and the Arts.

Employees said the moving day, 25 years ago, had a set schedule from the transportation of the patients to when and where their meals would be served. Patients ate breakfast at the Whittington building, received a sack lunch and ate dinner in the new facility. Finney said meals were served by floor at varying times all the way from the second floor to the seventh floor.

"My supervisors were very involved in getting the food over. It was very complicated, but we did it," said Cindy Hughes, Nutrition Services clinical dietitian.

"My role in the move was to assist the National Guard and make sure our patients were strapped in on a gurney. And, what they did was we had a convoy down Central Avenue and I was one of the last people to lock the doors," said Finney.

During the convoy, Intensive Care Unit patients were loaded into ambulances and traveled down Central Avenue to Higdon Ferry Road by a police escort, a distance of a little more than 4 miles. Lana Lambert, who works in Clinical Informatics, recalls riding with a ventilated patient who was alert, and feared that they would have an emergency during the transport.

"We were driving down Central (Avenue) and just about the point that we were at Bathhouse Row, I told her that she was having a police escort to the new hospital and her new hospital bed. I did not expect her to come sitting straight up out of the gurney to look out the back window of the ambulance to see her police escort. She was kind of excited about it, but it scared me," Lambert said.

As patients and employees cleared the building, making their way to the new facility, Finney, a maintenance worker, an emergency room doctor and a nurse stayed behind to lock up.

"I think all of us were shocked that this was it. We aren't going to be here any more. We stood in the door and locked the door. We got in our cars and left. But to turn around and look back at this was where we were or where we were leaving from and leading onto a new legacy, it was really something that you just can't forget," Finney said.

With emotions of sadness and excitement, employees saw a change from small rooms to larger rooms and equipment upgrades. Case Management registered nurse Carolyn Ceastrom was working in the Cath Lab at the time of the move. She saw the Cath Lab transform from a tight room to a large, two-room lab at the new facility.

"It was wonderful to be able to move around a little easier, get more patients taken care of ... I think our cath lab was down for a day or so until we could make sure that everything was running the way it should be," Ceastrom said.

Over the course of 25 years and three name changes, employees and former employees agreed that the ministry has stayed strong through the years.

"It is home. We are a part of this community that people depend on. People come to us for help. And, we also lean on each other for help. All of our co-workers are just one big family," Lambert said.

"I think that we have impacted (the community) in a positive way. We have gone through a lot of changes. We've gone through a move to a new facility years and years ago. Even as we have changed our name ... people have seen us go from St. Joseph to Mercy Hospital to CHI St. Vincent. I don't think they've noticed any change in the way we care for our patients and we are there for our community."