Kent leaves 'her mark on world' 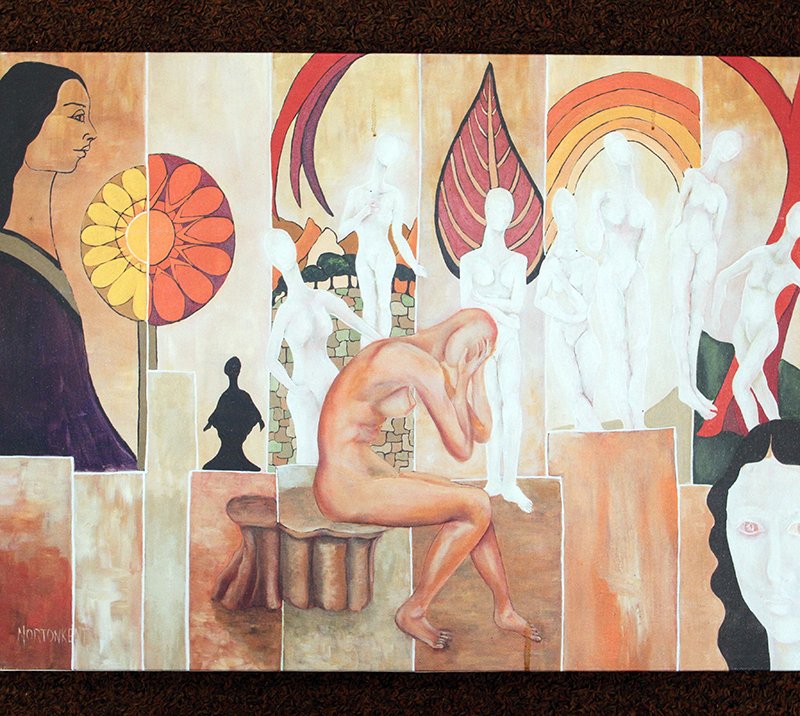 Known for her paintings known as "long necked ladies," examples of her work can be found around Hot Springs, including the piece "She Dares To Be Different" which hangs in the Hot Springs Convention Center. She also has a work at CHI St. Vincent Hot Springs, where Stanich said another piece will soon be donated.

During her career, her works were displayed at Gallery Central and Legacy Fine Art Gallery.

Before Kent moved to Hot Springs, she lived in Denver, where her work tended to be about nature, exaggerated animals and places from her neighborhood. She transitioned to painting faces before she relocated.

Stanich became friends with Kent shortly after she arrived in Hot Springs in 1997. She began developing "the long necked ladies" around that time, he said, noting the ladies are usually in the style of the Middle Ages and have sad eyes.

Over the years, the style of Kent's paintings evolved from the use of dark colors to brighter colors. Stanich said for a period of time, she painted the ladies without hands. Her final paintings were brightly colored, with hands.

Stanich said Kent would choose titles for works she wanted to create and paint to match them. Her titles included "Woman of Wealth," "Forgiven," "At Peace with Nature" and "Faith, Hope and Charity."

Kent, who never received formal training in art, received her Bachelor of Arts in anthropology, and a Master of Arts in sociology from Kent State University.

While she was still working as an artist, she lived in three different homes on Prospect Avenue, where she produced work from her home studio. Her second home on Prospect had a studio over the garage, so she remodeled the third home to have one, as well.

Over the course of her career, Stanich estimated Kent created close to 500 paintings.

In addition to painting, Kent had a passion for gardening. Stanich said she had "absolutely beautiful gardens" and would stage her plantings so that something was in bloom all year long.

He said Kent had a lot of knowledge when it came to plants, which she learned from books, explaining that whenever she became interested in something she would read as much as she could on the subject.

"She was a sponge for reading," he said.

Kent was a "a huge animal lover," he said, at one point owning nine dogs, a cat, four large cockatoos, 30 smaller birds and several chameleons. She donated works to be auctioned to raise money for animal rescues, including a painting titled "Caught Cat" to Paws and Claws Rescue.

The Sue Kent Trust, executed by Stanich, was set up to distribute her remaining assets to various animal causes. Stanich said she really cared about finding homes for homeless animals and covering veterinarian bills for animals in need.

A short biography and some of Kent's work were featured in the book "A Gathering of Artists II" produced by the Fine Arts Center, including an early version of her final piece, "Spirit of the Past."

In 2010, Kent was diagnosed with Alzheimer's disease. During her last years, she spent much of her time at The Caring Place. Stanich said she enjoyed all the activities the facility had to offer.

"The Caring Place was really her outlet," he said.

In addition to the donation to St. Vincent, Stanich will be donating two sculptures that had belonged to Kent's mother to Garvan Woodland Gardens. He said he hopes donations in Kent's name will keep her memory alive.

"Her artwork is her permanent mark on this world," said Stanich.