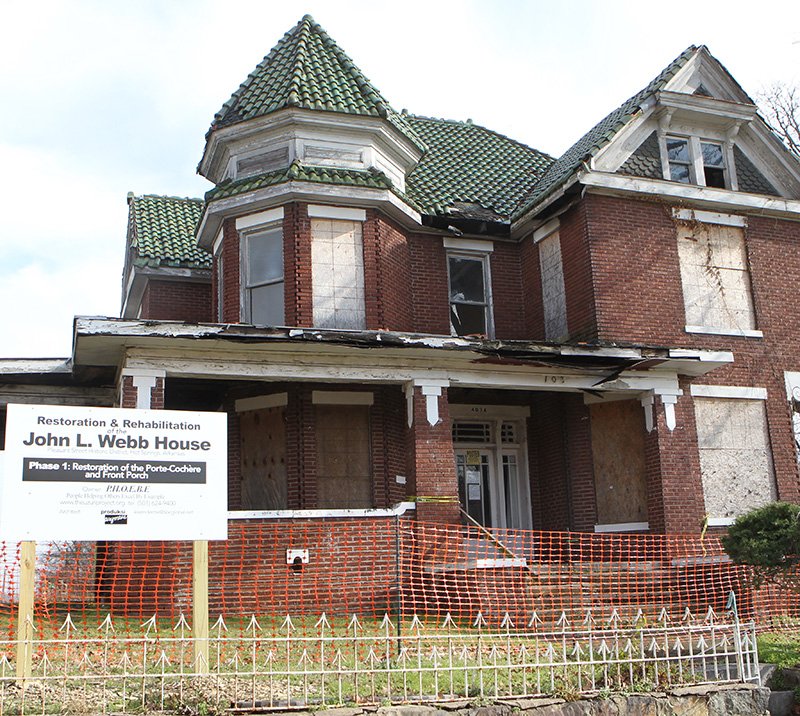 An important step toward the renovation of the John Lee Webb House, 403 Pleasant St., has been completed, according to the organization behind the project.

With funding from the Curtis Sykes Memorial grant administered by the Black History Commission of Arkansas, P.H.O.E.B.E., People Helping Others Excel By Example, has completed the Conditional Assessment Report and Concept Design for the Webb House. The report lays out what has been done since P.H.O.E.B.E. acquired the house in 2014 and what it plans to do to restore the house, according to Cheryl Batts, president and founder of P.H.O.E.B.E.

"It gives us a concise story of the house," said Kwendeche, the architect who researched and created the report.

Kwendeche, of the firm produksi arymeus arsitektur, operates out of Little Rock and specializes in the restoration of historic buildings. He was called in 2014 to work with P.H.O.E.B.E. on the Webb House project. He previously worked on the Daisy Bates House in Little Rock.

P.H.O.E.B.E. is a nonprofit organization founded in 1997 that focuses on documenting the history of the African-American community and its culture in Hot Springs. Its primary program is the Uzuri Project, which pairs younger members of the community with seniors to document their stories. It was through the project that P.H.O.E.B.E. became aware of the significance of the house to the community and its history, said Batts.

Batts said the Webb House is a contributing structure to the Pleasant Street Historic District. When renovations are complete, she hopes the Webb House, which is currently listed on the Arkansas Most Endangered List, will be listed in the National Historic Register as a stand-alone historic site in addition to its current place within the district.

According to a 2015 proposal for the house, the Webb House is a Queen Anne-style building purchased by John L. Webb in the 1920s, and lived in for 30 years. Webb, a philanthropist and contractor, became the leader of the Woodman of Union Fraternal Organization. He moved his family and the Woodman headquarters to Hot Springs in 1919. He created the Woodmen of Union Building, now known as the National Baptist Hotel, creating jobs in the community.

In 1945, Webb and his wife established the Emma Elease Webb Community Center, which is still a part of the community.

In a news release, P.H.O.E.B.E. said its goal is for the house to meet National Historic District restoration guidelines and meet current Hot Springs codes and standards.

When the Webb House is restored, Batts said it will serve as a learning center for The Uzuri Project Youth Institute, offices for P.H.O.E.B.E., a heritage tourism site, a community center and a cultural center that will house historic photos and oral histories.

Batts said P.H.O.E.B.E. is moving forward with fundraising efforts, sending out commitment letters to potential donors and working toward fundraising events. It is also applying for various grants.

"We have a piece of history here in Hot Springs no one else has, and we want to share it," Batts said.