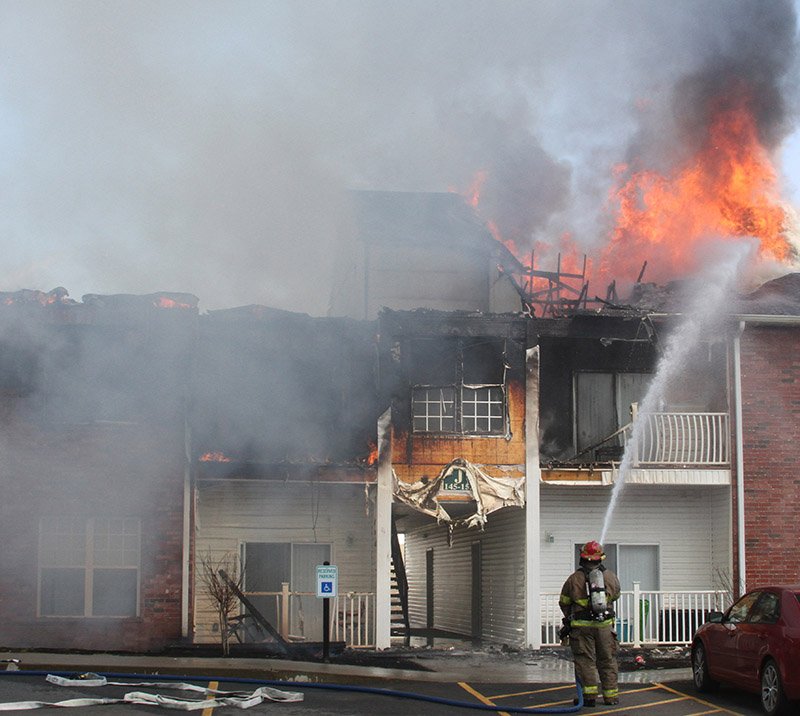 Savannah Ramey, Forrest Hills' manager, said all of the affected residents were offered the chance to move to unoccupied units inside the complex. While most are staying with friends and family for now, she said she hopes most of them will choose to remain in the complex.

"The 14 families affected are our first and only priority," Ramey said.

"I am elated no one was injured," said Ron Jefford, owner of Forrest Hills Apartments. "The business can be replaced."

Joe Miller, a member of 70 West EMS, said the only injury was one tenant who hurt his hand while helping to clear the building. LifeNet was also called to the scene to assist.

Sheriff's Lt. Joel Ware, who is also the courtesy officer for the apartment complex and a resident, said the fire started in upper apartment on the west side of the building. The cause for the fire was unknown at presstime Sunday.

"We ask people to respect the complex and not come by just to look," Ware said.

He said the complex has more than 800 residents and does not want any additional traffic that would make it harder for the residents as they try move their belongings.

Ware said he plans to ask for additional patrols in the complex to prevent anyone from entering the building, because it is a safety hazard. The roof of the building collapsed as a result of the fire.

Alicia John said that when her sister, Cheryl Humphries, learned her apartment was in danger, Humphries attempted to run into her home to rescue her cat. Firefighters prevented her from entering, but they went inside to rescue the cat.

Residents of the surrounding buildings watched as the fire departments battled the fire.

"The wind was so heavy. The firewalls helped, but it looked like it went through the attic," said Travis Welch, who lives in a building across from Building J. "It was scary. Everyone was moving their cars."

While Building J was the only building to catch fire, the siding melted on the nearest structure, Building I.

Ramey said she was impressed by the outpouring of support from the other residents who wanted to help the displaced residents.

By Sunday afternoon, neighbors were helping the displaced residents move their belongings out of the building. Angela Patton, assistant manager of Forrest Hills Apartments, said people provided food, water and clothing for those who needed them.

Red Cross volunteers Keith Keck, John Seicter and Don Dailey were at the complex to provide assistance to the displaced residents.

Bridgett Williams, regional director of communications for American Red Cross Serving Oklahoma and Arkansas, said its goal was to provide immediate financial assistance to the residents based upon each families' need. They were issued cards with money for a hotel for the night or food and clothing, depending on need.

She said of the 30 residents of the 14 occupied units, the Red Cross was assisting 25. She said some residents were out of town, but the Red Cross will touch base with the remaining residents as soon as they return. Residents needing further assistance will be referred to other agencies.

Williams said the fire serves as a reminder to anyone living in a rental property about the importance of having rental insurance. The Red Cross also provides smoke detectors at no cost to anyone who needs them, she said. Call 800-RED CROSS for more information.

In addition to the Forrest Hills fire, the Hot Springs Fire Department was called to the scene of a structure fire in the 100 block of Chitwood Street Sunday afternoon. There were no reports of injuries, but a family was also reportedly displaced as a result of the fire.