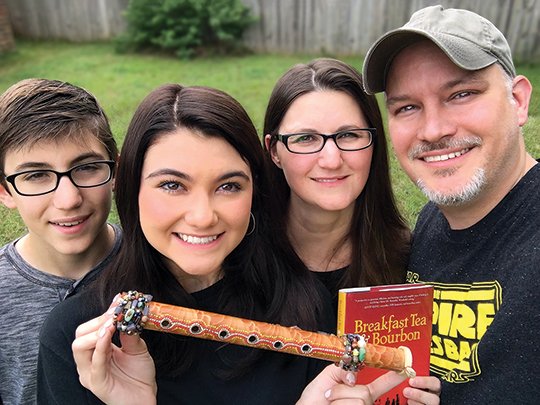 A family of four from Kilgore, Texas, is $50,000 richer after finding a treasure hidden in Hot Springs by a Minneapolis author and publisher by following clues from his novel released earlier this year.

The novel "Breakfast Tea & Bourbon" by Pete Bissonette, president of Learning Strategies, was released at 5:08 p.m. on Feb. 9, leading thousands of people to begin a systematic search of the U.S. looking for the hidden treasure, clues for which were woven into the narrative of the story.

In the novel, five friends join a treasure hunt, rent a dilapidated RV and set off in search of the treasure. Readers of the novel were tasked with using hints and clues from the book to solve their own real life hunt for the treasure that Bissonette had hidden somewhere in the United States.

"I hid $50,000 and wrote a novel about a treasure hunt. If you follow the hints and clues in the treasure hunt, guess what? You found the $50,000," Bissonette told The Sentinel-Record on Monday.

He added that his company creates and publishes self-improvement audio and video programs geared toward helping people gain access to the part of the brain that houses intuition, creativity, resourcefulness and ingenuity.

"We're always trying to figure out, 'Well, how do we get people to activate their deep inner resources?' and so I thought about a treasure hunt. And I wanted to do something that was fun and different," he said.

Coy Lothrop and his wife, Amy, found the treasure in Hot Springs on July 14. They were awarded the prize money on Monday. Lothrop said he discovered the novel after a friend suggested he purchase it and complete the hunt.

The family first narrowed its search to the Central Time Zone, because of the start time of the treasure hunt, 5:08 p.m. Central Time, while other treasure hunters searched the entire country.

While there are many ways in the book to determine the nearest city, Coy and his family used references in the first chapter to New Orleans as the base, then noticed a dot pattern embossed in the hard cover of the book that pointed to Hot Springs.

They immediately traveled from Texas to Hot Springs to follow in the steps of the characters in the book. The first attempt left the family empty-handed; they returned home and Lothrop reread the book, discovering a clue he had missed the first time, and the family returned to Hot Springs.

He added he and his wife uncovered the treasure, a "Magic Suling," or flute, together. A fictional version of the bamboo flute was featured in the book.

"I kind of brushed things away but we were both standing over it so it was a group effort. We saw what we saw and we got really excited," Lothrop said.

With the $50,000, he said the family plans to pay off medical debts that have built up, buy their daughter a car, and invest the rest of it.

Bissonette also awarded the family 100 bottles of Lido Bay wine and $5,000 extra to give to the charity of their choice. The family chose Texas Scottish Rite Hospital for Children in Dallas.

"My daughter had a fairly severe scoliosis condition that we couldn't correct. ... It got to where it was a severe, serious deal, so we went out there and did the spinal surgery. That was three years ago. Now, she has full range of motion, good posture. She moves like your typical teenage gal. She's 4 inches taller now so it made a real difference," Lothrop said. "This contest is literally changing our lives."

On why he chose to hide the treasure in Hot Springs, Bissonette said, "I knew that if I chose any place myself, people would try to dig into my background and try to figure out where I had been, what I liked. So instead, I printed out a map from Google of the United States and taped all the pages together -- it was a big map -- and I spun it around on my dining room table with my eyes closed, curled my finger up in the air and pushed it down and it landed within a thumbprint from Hot Springs. I thought, 'Why not?'

"The next step was, 'Well, what's the story?' I do a lot of meditation and what I did was, I kind of closed my eyes and did a meditation and invited a whole bunch of my imaginary friends to a bourbon tasting party -- I like to drink bourbon -- and the story just evolved from there. It was those friends that came into my mind during that time that went in the story 'Breakfast Tea & Bourbon.'"

Bissonette said the novel has two more treasure hunts built into it. He has plans to release "The Missing Chapter" soon, which will activate the second treasure hunt. In the meantime, he said fans have a chance to solve a riddle and win a case of Buffalo Trace Bourbon.

The riddle and more information can be found online at http://www.breakfastteaandbourbon.com.