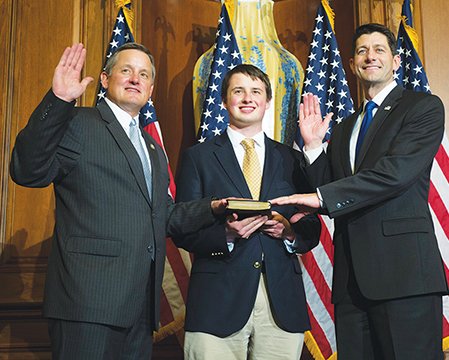 The official swearing in took place in the House chamber, followed by a ceremonial swearing in with Speaker of the House Paul Ryan in the Rayburn Room of the U.S. Capitol, a news release said.

"It is a great honor and privilege to serve the hardworking taxpayers of the 4th Congressional District," Westerman said. "As we start the 115th Congress, I will continue the fight to undo President Obama's executive overreach. I will work with President-elect Donald Trump and my colleagues in Congress to restore constitutional authority granted to the legislative branch, to simplify our tax code, and to repeal Obamacare once and for all.

"The next two years will be full of action as I join my colleagues in executing the mandate the American people delivered" in the general election on Nov. 8, he said.

An open house was held Tuesday afternoon at Westerman's Washington office for constituents to have a chance to visit with Westerman and the 4th District staff.

Twice elected to the Arkansas General Assembly, Westerman was Arkansas' first Republican House Majority Leader since Reconstruction. He was an architect of the House Republican SIMPLE Plan, which led to the 2013 Republican takeover of the Arkansas House of Representatives.

A 1990 graduate of the University of Arkansas in Fayetteville, Westerman was a four-year walk-on member of the Razorback Football Team. He received the Outstanding Young Alumni Award in 2005 and the Distinguished Alumni Award in 2012. He earned a Master of Forestry degree from Yale University in 2001.

Westerman is a former board member of the Fountain Lake School District and serves as a deacon at Walnut Valley Baptist Church. He lives in Hot Springs with his wife, Sharon, and their four children.