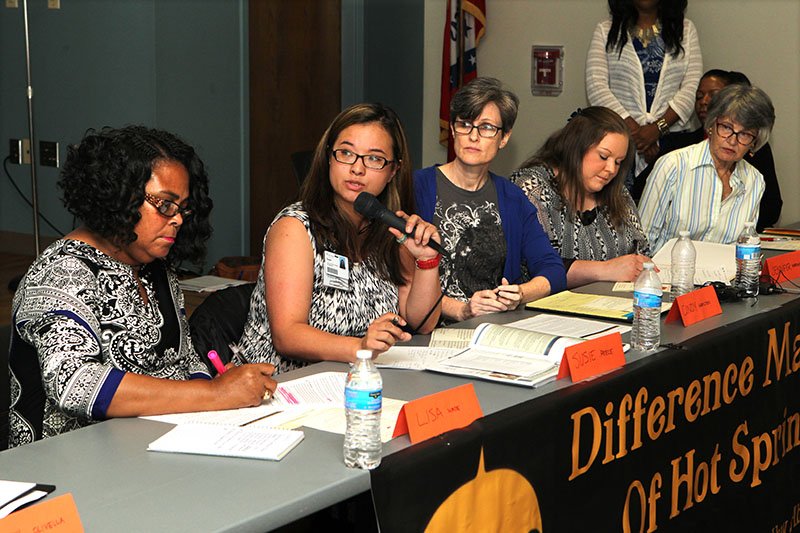 Friday's discussion was the second Community Health Symposium event, "Building the Community through Sustained Health Care." Difference Makers founder and president Willie Wade Jr. said the group is working to identify the root causes of health disparities within the community.

"Long before we need medical care, our foundation of health begins in our homes, our schools and our neighborhoods," Wade said. "We support initiatives that address the highly interconnected social and economic factors which affect health and empower communities to take action."

Wade said the event was planned as a way to start a larger conversation about health care. Esther Dixon recently became the group's executive director.

Panelists were invited to discuss the roles of ethnicity and socioeconomic status in health care. Wade said the local conversation is part of a national debate led by politicians at the federal level in Washington, D.C.

"We cannot control any of that, but we can control what goes on within Garland County," Wade said. "We can give input. We can help be a part of the decisions that are going to be made that are going to take us into the new era."

The panel was moderated by Brenda Brandenburg, a registered nurse. Brandenburg serves as case manager and safety director for Munro & Co.

"We do feel like we are at the mercy of the system, but we created the system," Brandenburg said. "We can change the system. This panel of people is the second step in empowering our neighborhood."

Brandenburg noted more Arkansans lived in areas classified as rural than the national rate, earn a lower income and are more likely to live in poverty. She said a recent study ranked Arkansas 48th in the country in terms of health. She also detailed how habits of Arkansans contribute to chronic diseases, while the flu and pneumonia remain leading causes of death in the state.

"Not everybody I sit down with has any kind of situation I can address, but maybe they have never sat down and tried to identify what their situation was and how much in need of care they were," Olivela said.

Several attendees discussed how the quality of health care is affected by local employers. County Judge Rick Davis noted the reliance of Hot Springs' economy on retirement and tourism.

"I think we need that, but we also need a balanced portfolio that basically creates jobs that pay more than the minimum wage," Davis said.

Hot Springs Mayor Pat McCabe also discussed how the local economy can impact health care. He said areas can have shortages of care in certain disciplines due to difficulties attracting needed physicians, but a surplus can be present for other specialties.

"Nobody would really think about poverty as a health risk, but if you look at communities that have exceptional health, you will find they have a low penetration of poverty."

Teen pregnancy prevention was identified as a gap in services by four graduate students from the Clinton School of Public Service in Little Rock during a study conducted during the 2015-16 academic year. Marion said Garland County's teen pregnancy rate is higher than the state's, which leads the country.

"If we are talking about poverty, we are talking about teen moms," Marion said. "Teen moms are raising kids. Their kids don't have it very well either. Most of their birth and infant care is Medicaid, their kids are on Medicaid and they are on S.N.A.P. and all kinds of public assistance. The public cost is staggering."

An area where local agencies have found success is in suicide prevention. Garland County experienced a decrease of more than 50 percent in its suicide rate in 2016 after two years of dramatic increases.

Reece said work increase public awareness has been key to the success. SPA, CHI and other organizations have worked to provide training for first responders and other professionals.

"We have worked with a lot of the other community organization and tried to implement or add suicide prevention pieces within their organizations," Reece said. "Levi Hospital has done a lot of work.

"Just that population alone having access to the information has probably been beneficial. I cannot say it was just us. I think it was a communitywide effort."