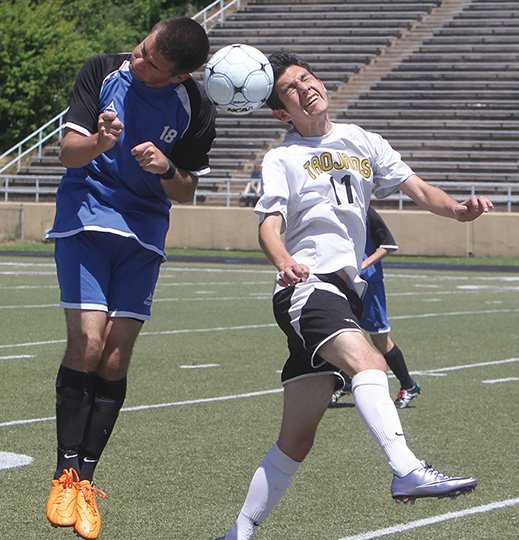 The Sentinel-Record/Richard Rasmussen HEADS-UP PLAY: Hot Springs' Tristan Trejo (11), right, and Greenbrier's John Evans head the ball during a Class 5A state-tournament game last May at Reese Memorial Stadium. Hot Springs won the match 6-1 and went on to beat Valley View in Fayetteville for the state championship. The Trojans begin their title defense today with a noon match against Pulaski Academy in Brookland (Craighead County).

Though defending Class 5A champion and top seed from 5A-South, Hot Springs' soccer team has no room for relaxation in a noon first-round match today against 5A-Central No. 4 seed Pulaski Academy.

"I've talked to a few coaches from around the state that have played them," coach Cory Sturdivant said. "We know that they've got a guy that's going to be playing forward for them that is a pretty decent scorer. From two years ago, we know they're well-coached. I think some things might have gone wrong for them and dropped them down to the four-seed in their tournament, but the fact of the matter is, they still finished second in the regular season in the 5A-Central. It's going to be a game, but we feel pretty good about the matchup."

It's Hot Springs' first appearance at Brookland High School (Craighead County) but the second-straight year that the state tournament is on an all-turf field. Hot Springs beat Lakeside in the semifinals at Reese Memorial Stadium last year and Valley View in the title match at Fayetteville.

"This will be the first time that we've gone up there," he said. "The thing that we like about the turf is the consistency. We practice on it day in and day out. That's what the kids are used to playing on. You take having to worry about the condition of the field out of the equation."

Despite standard bumps and bruises, Hot Springs is at full steam and "taking the same mentality that we took last year," Sturdivant said.

"We just focus on them one at a time. These are the top 16 5A teams in Arkansas. We just try to focus on the game in front of us and not look ahead of us in the bracket. I preach to the kids all the time, 'Stay humble. Stay hungry.' I think having that mentality going into last year, that's one of the things we've tried to carry over into this season. We'd love to end up in Fayetteville, but right now, we're just worried about taking care of business against PA."

* The Lady Trojans, fourth in 5A-South, hope to go beyond the first round for the first time but are at less than full strength for today's 10 a.m. match in Jonesboro against Little Rock Christian.

"Overall, the rest of the kids are ... healthy and in good shape," said Sturdivant, counting on defenders Briana Aldaz and Berenice Santillan because Christian has "some quick girls coming at us."

"You always want to give your team the benefit of the doubt. There have been times when the four seed has upset the one seed. It just depends on who Little Rock Christian brings and who shows up for us and the mentality of the game. All it takes in soccer is one mistake and two seconds. It's not over until it's over.