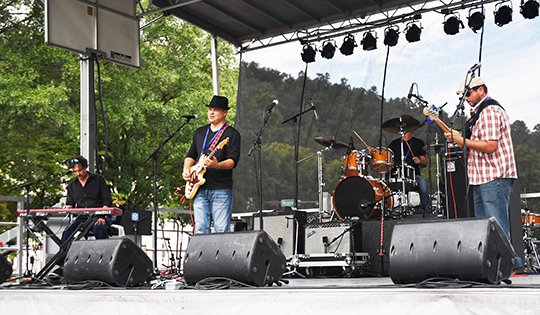 Festival attendance has been in the 1,400s in years past, but this year's attendance was just a little over 600 people, ending the festival with just under $14,000 in the red.

"Kind of like we threw a party and nobody came," Hughes said.

The lineup included Anthony Gomes, Nikki Hill and John Nemeth, who provided a spectrum of blues-tinged music, leading one of the best groups of headliners to appear at the festival. Others in the lineup were Akeem Kemp, Nandha Blues, The Stella Vees, Hoodoo Blues Revue, the John Calvin Brewer Band, Spa City Youngbloods, Jelly Brown & Kathy Kidd, and Al Hill.

A combination of low turnout and fewer sponsors contributing to support the event led to this year's deficit.

"I don't know, I really don't. I've racked my brain as to why no one showed up. We advertised, we promoted this event as well as we have in years past through the regular news media, through social media," Hughes said. "The weather was great. I was told that other events also had a low turnout. Sunday evening, which was the second day of our event, when you looked at the sidewalk and the streets, there was just nobody in town Sunday evening. The people that were there had a blast, but we were about 600-700 short."

"A lot of people come to Hot Springs for Labor Day and then we'll start getting calls when they find out we have a blues festival. They kind of make us part of their itinerary," he said.

In an effort to recoup the losses, the SCBS is planning several fundraising activities over the next two months:

For $10, individuals may pre-purchase a meal of spaghetti, salad and garlic bread and retrieve the plate on Nov. 12 at The Big Chill, 910 Higdon Ferry Road, between 11 a.m. and 1 p.m. or 4-6 p.m. All meals are pre-order, prepay; there will be no extra meals on the day of pickup. Deadline to order is Nov. 8. Tickets may be purchased at The Big Chill, from any Blues Society or Blues in the Schools member, or on the society's website.

Tickets are $20 and may be purchased online or at the door.

Individuals who donate $50 or more to the society will be entered into a drawing for two possible prizes: a weekend stay in Eureka Springs or a $50 gift certificate to The Big Chill. The different levels of contributions are $25, $50, $75, $100, $150 and Other Amount, and can be made online on the society's website. Contributions will be ongoing, however, the deadline for contributions that are eligible for the drawings is Oct. 31.

The SCBS will offering two Backyard BBQ packages that include hamburgers, hot dogs, sides and drinks for up to 30 people along with a performance by the Spa City Youngbloods. Alcohol is not included. These are limited to two packages. Information and pricing is on the society's website.

Hughes said next year's festival and future SCBS events depend entirely on if the money is raised or not.

"We have to pay the bills first. We are in fundraising and survival mode. My goal is to have everything paid before the end of the calendar year. I'd really like to get it done before that but it just depends on how much support we get," he said.

Hughes noted the SCBS is a nonprofit 501(c)3 organization, so donations, in-kind or otherwise, are tax deductible.

Other sources of income for the society come from its Hot Springs Crawfish & Gumbo Festival and the Hot Springs Craft Beer Festival. The society also hosts the Humpnight Blues Jam every other Wednesday, sends acts to Memphis for the International Blues Challenge, and the Blues in the Schools program.

"All of those things are in jeopardy if we can't pay the bills. We're trying to make sure that we stay alive, literally. I hate to ask the community to help us pay the bills but nobody showed up to our event. We're working hard to do it, but if people don't step up to help, there won't be a Blues Society," Hughes said.

SCBS board elections are set to be held in November and another fundraiser is being planned for December. Details for both will be forthcoming.

"We'll put that info out on our website and on Facebook. Having the right people involved can make a big difference and we want to get good board members," Hughes added.